Compare and Contrast of 3 Sociology Theories

Symbolic interaction refers to the patterns of communication, interpretation and adjustment between individuals,” (Baird and Kaufmann) humans will interpret different meanings in everyday life, from having a conversation or using their conscience.

Don't use plagiarized sources. Get your custom essay on
“ Compare and Contrast of 3 Sociology Theories ”
Get custom paper
NEW! smart matching with writer

This theory is based on microsociology because it can be based upon individual interaction or a single person using symbolism with an object. For example, a person can interpret a white dove as a sign of love and peace, while another person can view it as just an animal.

Symbolic interaction is unlike the two other theories, mostly because it is on a micro-sociological scale and focuses on just one aspect of society.

It is believed that this theory’s origins are developed from Max Weber who believed a person acts based of their interpretation of the world. However, an American sociologist by the name of George H. Mead introduced the theory to American sociology in the 1920’s (Sociology).

The second theory is functionalism which is defined as, “the doctrine that what makes something a mental state of a particular type does not depend on its internal constitution, but rather on the way it functions, or the role it plays, in the system of which it is a part.

(Functionalism)” This theory is based upon different aspects of society, working interdependently together, creating a sound environment. The best example of this theory would involve a family and their government working together to create an ideal environment.

As the family works to pay off taxes to the government, the government will supply the children with education and a future (Sociology). It has similar fundamentals as a lifecycle, and if all goes well, will continue in a similarly sound society. Functionalist, Emile Durkheim, believed it could be broken down into two types of social consensus: mechanical and organic solidarity (Sociology). Mechanical solidarity is a community sharing similar beliefs and work. An example of this is an Amish community (Sociology).

Organic solidarity is most common, especially in America, and it refers to a society functioning with different ideas and work. Robert Merton divided functionalism between latent and manifest functions. Manifest function would be “intentional and obvious”, as latent is unintentional and discrete (Sociology). What differentiates this theory from the other two is that this theory does not require social change. This can be problematic because it does not consider aspects like divorce or bankruptcy. Symbolic interaction and functionalism are alike in the fact that they both require social interaction.

Emile Durkheim was a main tenant in creating this theory (Baird and Kaufmann). Conflict perspective is the third theory. “Of the classical founders of social science, conflict theory is most commonly associated with Karl Marx (1818–1883). Based on a dialectical materialist account of history, Marxism posited that capitalism, like previous socioeconomic systems, would inevitably produce internal tensions leading to its own destruction,” according to the book From Plato to Derrida (Baird and Kaufmann).

This perspective is different from the other two theories because it focuses on the negative aspects on society. Unlike functionalism, it focuses on the on society’s change and empowering social structure. Although it is on a macro-level scale like functionalism, it primarily is focused upon the change of society. It explains social phenomena because it demonstrates the aspect of a food chain, and that it is “survival of the fittest” in society. From social structure, people will learn where they belong in everyday life. Obviously a person of poor status would not be engaging with someone of a rich status.

The more rich side of the population will gain more benefits from education and the business, providing the wants and needs to their dependents, creating a stronger backbone for their future. I believe, as an American, the theory that best explains our society would be functionalism. Our country solely depends on an infrastructure constructed by different branches of society working together to create a greater picture. We, as adults, pay for taxes that will supply our children with schooling, so one day they too can have a paying job to help out their children through school.

The United States of America is quality example of functionalism, especially in the more massive cities like Manhattan or Chicago. Cities are dependent on the interdependent functions of society to keep their society on a sound level. Another aspect of functionalism is the organic solidarity which is most common in America because of the nation’s vast difference in ideals in everyday life which proves to keep the government and society in the middle, or never changing. In any case, if bankruptcy happens to a significant company, the impact will be felt through society and the economy.

This shows the flaws upon the theory because it does not consist with the concern of divorce or bankruptcy. As society has proven, we adapt and an independent role takes over, once again providing stable government. The three main theories of sociology are symbolic interaction, functionalism and conflict. Symbolic interaction is the only theory that is on a micro-level, focusing on the cause and reaction between two variables. Functionalism and conflict are on a macro-level and view society on a larger scale as a whole.

Conflict theory is the only theory that reflects a negative input, as symbolic and functionalism focuses on the positive aspects of society. I believe, as an American, functionalism is most logical answer for our reality of a society. It embraces the way our government has adapted over hundreds of years, proving the best fit in my opinion. I believe it focuses on the economic infrastructure and capitalism of the United States of America. All the theories are alike in that they each have interaction, even if it on different levels.

Compare and Contrast of 3 Sociology Theories. (2017, Feb 08). Retrieved from https://studymoose.com/compare-and-contrast-of-3-sociology-theories-essay 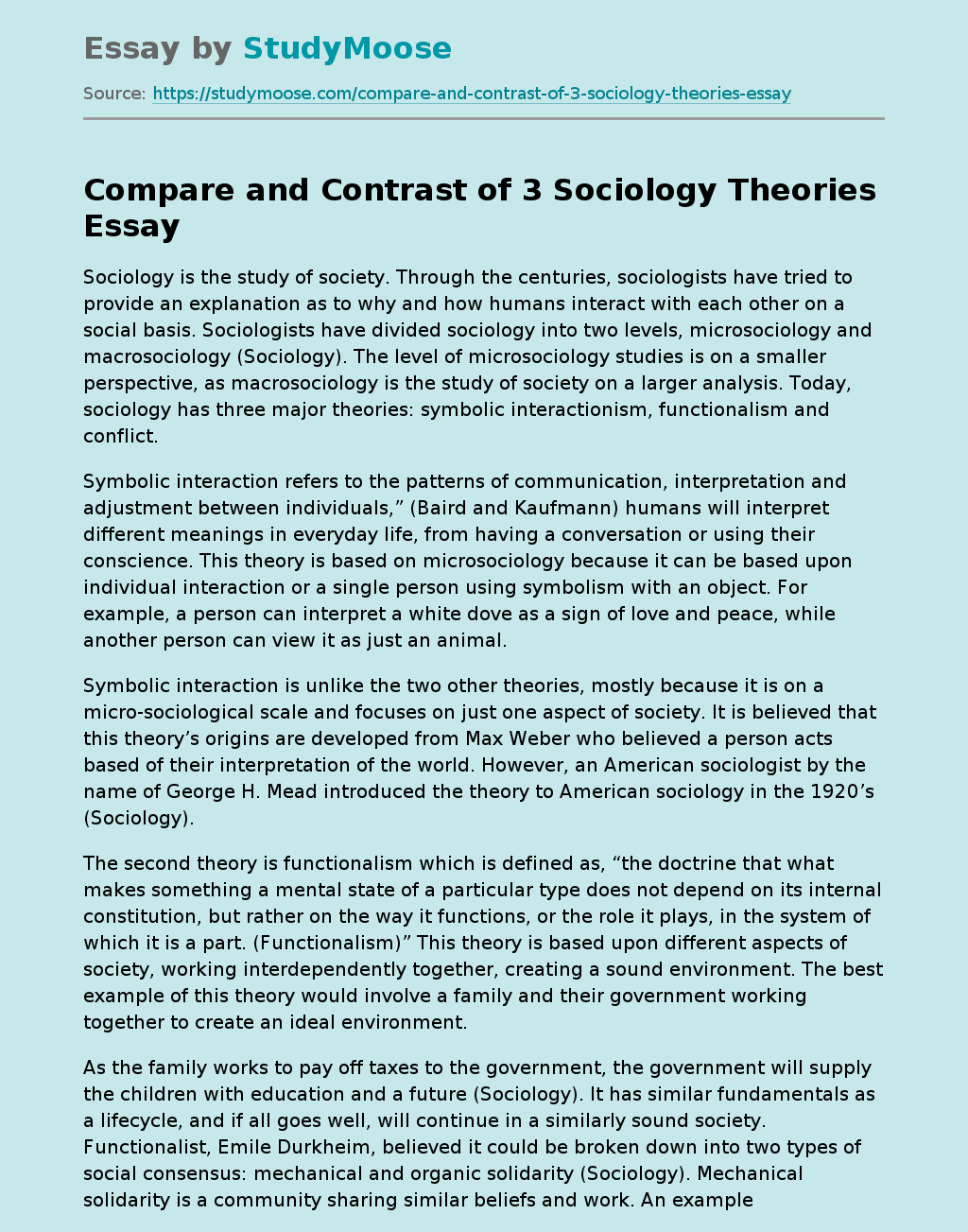