“As we venture further into the 21st century, the global population seems to be growing at an alarming rate. By 2030 the world is to home of estimation 8.3 billion, as compared to 6.12 billion just 30 years prior.” (UN 2008) This quote speaks to the increasing population growth that the world is facing right now. A demographic perspective is an understanding of how the causes of population are related to the consequences. Thomas Malthus and Karl Marx are population theorists who are concerned with the control of the population, modernization and economic growth, to name a few.

Don't use plagiarized sources. Get your custom essay on
“ Compare and Contrast the Demographic Perspectives of Thomas Malthus and Karl Marx with respect to the causes and consequences of population growth ”
Get custom paper
NEW! smart matching with writer

Firstly, Poverty was one of the leading problems that both sociologists saw would come out of the population growth. However they both ascertain it to two different causes. “Population growth is generated by human beings who like other species are driven by a special urge to reproduce.”

(Malthus) Malthus posited that it was due to persons in poverty with all their free time and their timeless passion that poverty is on the rise.

He believes that persons in poverty because they have nothing to do during the day just engage in sexual activity and reproduce causing population growth at an exponential level. On the other hand Marx attacked the writing of Thomas Malthus retorting that “free time to have sex” wasn’t the cause but in fact the cause was an exploitation of the workers by the owners of the means of production. He attested that the specific relations of exploitation which obtained at that time between wage workers and capitalists, and the antagonistic relations between the landed and the industrial interests, changing them into the operation of the natural law of necessity that manifests itself through positive checks to population growth.

Furthermore Marx and Malthus differ in opinions on if society continues to increase can they survive i.e. feed themselves.

Malthus in his essay on the Principle of Population (1798), Malthus presented a startling idea. He theorized that the population grew exponentially (i.e. 2,4,6,8 etc), whilst food supply grew arithmetically (i.e. 1, 2, 3 etc). This idea, dubbed the ‘Malthusian Equation’, was seen as proof that the world population would inevitably outstrip food supply. The result, he believed, would be human anarchy. The population would thus be dramatically reduced, as many ‘the majority being poor’ would die from starvation. This can be supported with the study in Calcutta; India which has witnessed unbridled population growth. In the streets of the city, which are notorious for being the dirtiest and most densely populated in the world, thousands starve to death. (Musapha, 2006). However Marx did not feel the same way as he disputes Malthus’ statement about society not being able to last.

Marx postulates that the food supply is not threatened by over-population. He claims that with the use of technology it is possible to produce food and other goods needed to meet the demand of a growing population. Therefore the growing population would survive as technological advancements would make it possible. Nevertheless the issue of over-population is a key issue to be discussed. These two sociologists see differing arguments when it comes to over-population. Malthus believes that over-population would lead to famine, pestilence and war which would act as a natural limit to human population increase. In order to combat the imminent demise of the human race, Malthus suggested preventative and positive checks. He was particularly critical of the poor, who he saw as thorns in the side of society.

He was a strong advocator of the abolition of the “Poor Law”, a welfare system which he believed encouraged the poor to reproduce themselves. He saw no reason to pay the poor as they wouldn’t be able to ameliorate their position and would continue to be a ‘parasite’ on society. Instead he advocated that the money be given to the upper classes, so they could contribute to high society: art, science etc. He believed strongly that it was the poor who were to be eradicated and the rich to take the dominion of the world and carry on the rich legacy. In Herbert’s Spencer this was “survival of the fittest”. On the contrary Marx’s most robust criticism of Malthus’ theory is the latter’s opinion that the poor are culpable for the global demise. He believes that it is not the poor that is to be blamed for the population surge, but the rich.

He believes that in an effort to accumulate and expand capital growth, the rich rely heavily on the poor to reproduce themselves. This is because when there is a large labour force but a scarcity of jobs the worker, in his desperation for employment, will work for anything. Thus the capitalists are able to keep wages very low and a “reserve army of labour” is endangered, who will work at anytime for anything. The bourgeoisie brainwash the proletariat into thinking that large families will result in greater chances of employment, and as a result, population sees a marked expansion.

Therefore, in Marx’s eyes, Malthus’ theory in the capitalist’s attempt to rectify social phenomena and blame the poor for something that is not their fault. In closing, both the Malthusian and Marxist theories on demographics have their similarities and differences. There are tenets of their ideas coming through in all aspects of modern society. However, to apply only one to the current situation is a flawed approach, as there must be a combination of the best elements of the two.

Compare and Contrast the Demographic Perspectives of Thomas Malthus and Karl Marx with respect to the causes and consequences of population growth. (2016, Apr 22). Retrieved from https://studymoose.com/compare-and-contrast-the-demographic-perspectives-of-thomas-malthus-and-karl-marx-with-respect-to-the-causes-and-consequences-of-population-growth-essay 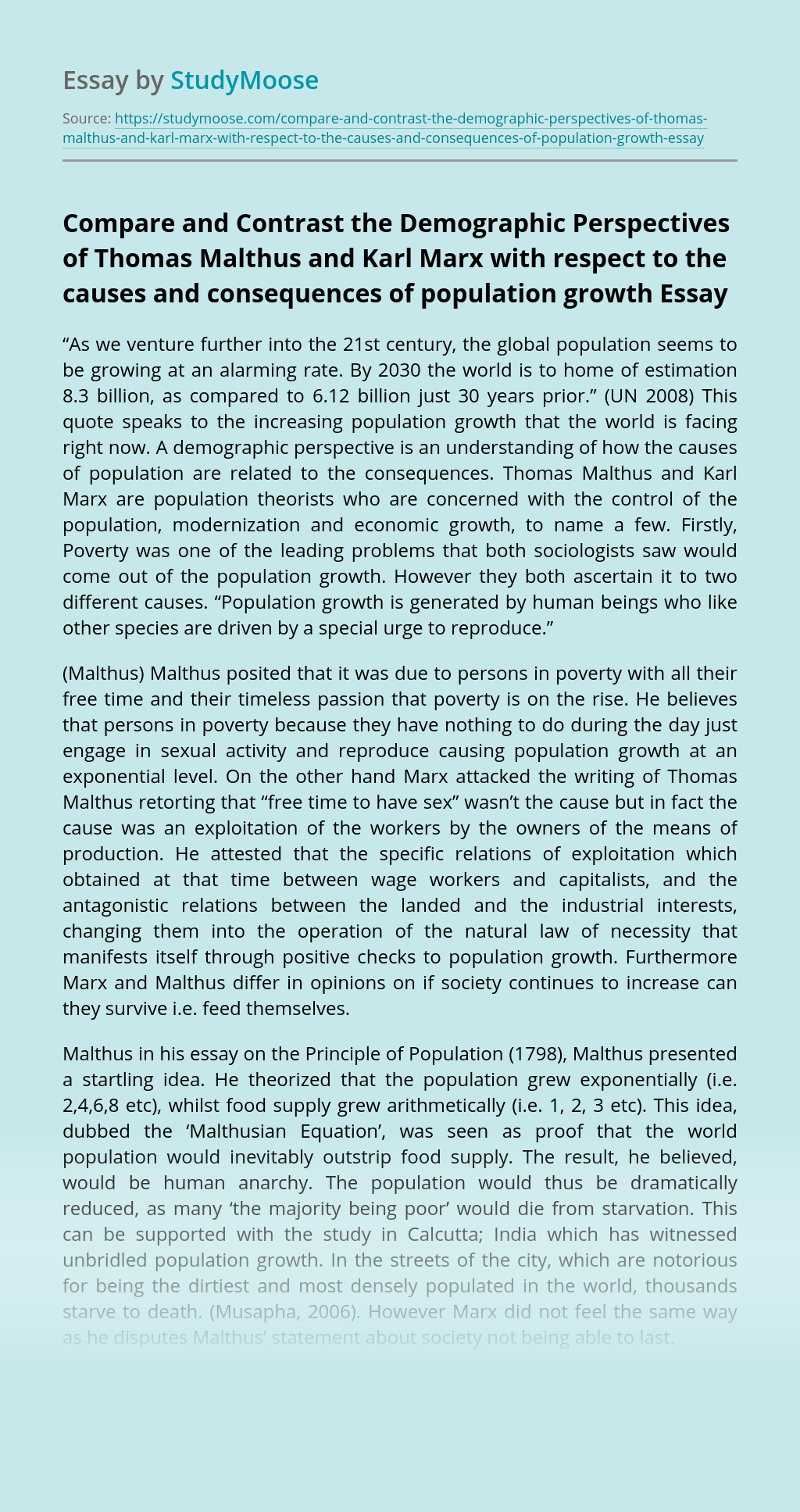