Post-Marxist Feminist Reading on the Progress

Upon reading F. Sionil’s short story “The Progress”, my initial reaction was that the characters where described based on the stereotypes of Filipino working citizens. The author was able to highlight common Filipino economic problems. However, a female portrays the role of a breadwinner, instead of the usual male character. Marina Salcedo, a government employee from the province who has worked for twenty years, experienced oppression in her male dominated work place. The author was not specific with Marina’s character, but rather, described her stereotypically instead; focusing on the experiences and roles of Filipino women in the society.

Don't use plagiarized sources.
Get Your Custom Essay on Post-Marxist Feminist Reading on the Progress Just from $13,9/Page

Although Filipino women have come to level with the working class society, there are still cues of their marginality, whenever and wherever a man is of higher rank than them.

Most of F. Sionil Jose’s story depicts economic and social issues. Studying his works in a Marxist approach is very relevant, since he himself also aims for equality in the hands of the economists, the government, and/or in the different social classes in the Philippines; he writes only aiming for social justice and change to better the lives of average Filipino families.

F. Sionil Jose is one of the most widely-read Filipino writers in the English language. He has written a number of novels, short stories, and essays (some of them are being studied in literary classes, and/or for thesis/dissertation papers). Jose was born in Rosales, Pangasinan, the setting of many of his stories.

He is currently a columnist in a national newspaper company in the country. This study aims to determine the cause of oppression of women in the working class society. It is analyzed in a Post-Marxist Feminist approach, focusing on Heidi Hartmann’s ‘dual systems’ stance on patriarchy and capitalism. Sexual division between men and women is also analyzed in this study, focusing on answering Marxist standpoints to feminist questions.

A Post-Marxist Feminism is defined as a commitment to feminism that involves a critical preservation and transcendence of Marxism (Tormey, 2006: 114). Contemporary Marxist Feminists simply focus more on things like the concerns of working women. They help us understand how the institution of family is related to capitalism; how women’s domestic work is trivialized and not considered “real work: and basically how women are given the most unfulfilling, boring, and/or low-paying jobs. These are all offered as partial explanations for gender oppression.

Post-Marxist approach is used in this study, rather than sticking with Marxist approach alone, because it moves away from the traditional Marxist perspective of the upper/lower class base distinction, or inequality of power in the society. Post-Marxism restates and revises Althusserian and/or Foucauldian theories, and, unlike the traditional Marxism, that emphasizes the priority of class struggle and common humanity of oppressed groups, these scholars all reveal social life’s sexual, racial, class, and ethnic divisions and progressive import (Goldstein, 2005:2).

Marxist-feminist approach on the other hand is a sub-type of feminist theory– among many other types – which focuses on the dismantling of capitalism as a way of liberating women. Marxist-Feminist analysis evolved as a feminist-inspired critique of the shortcomings of traditional Marxist approaches to the ‘women’s question’ according to Cecilia Sardenberg (Sardemnerg, 1994). She views Marxist categories as ‘sex-blind’ and thus incapable of addressing the analysis of gender-related issues, authors such as Heidi Hartmann and Z. Eisenstein (who call themselves ‘socialist feminists’) argued for a combination of Marxist and feminist theory, coining the term ‘capitalist patriarchy’.

My study will focus on Heidi Hartmann’s famous ‘dual systems’ thesis, which held that both capitalism and patriarchy is responsible for women’s oppression, allowing for some form of ‘cultural’ patriarchal autonomy from the economic base (Tormey, 2006: 114).

Capitalist societies, by definition, are based upon the private ownership of the means of production; the production process itself involved two major social classes: the Bourgeoisie who own the means of production, and the property-less Proletariat (Holborn, 2012). The relationship between these two social classes is based upon the profits of the Bourgeoisies. They have the power to control the wages of the Proletariat, usually amounting to less than the value of goods and services which the Proletariats actually produce; exploitation is another way to look at how capitalism works, an unjust system which generates social inequality and poverty for millions of members of the Proletariat.

The story depicts a modern capitalist society, making sure that laborers/employees are desperate enough to work for poor wages. The story describes how Marina, even after working for 20 years, is not able to save money because the price of everything keeps going up. She experiences the typical Filipino problems, like deciding how she can afford sending her kids to college and paying the mortgage at the same time. She even brings packed pork chop, hard boiled eggs, and fried rice to avoid buying lunch; most of the time she walks to work instead of riding a tricycle just to save a little.

The government itself contributes to the system of capitalism in the story. Just like the law of supply and demand, the more available workers or employees fitted to do a particular job, the less an employer will have to pay them for their work (Cyprus, 2012). Marina who is already tenured in her job as a Senior Clerk in the Ministry (a job position anyone can simply apply for, and perhaps is replaceable anytime), is expecting to have her application for promotion approved – which is five years overdue.

The higher officials in the government procrastinates their job in approving job promotions so that the employees themselves will give up in even thinking of having their salaries increased. Marina keeps on going back to her boss for an update of her application; in the end, her boss tells her that she will have to go to Manila in order to have it processed faster. An option that isn’t likely to happen and is risky for anyone who has less money saved, yet Marina decides that she should go because it is for the better.

Sexual division is represented through the roles of the men and women in the story. The Clerk position is mentioned several times, in the character of Marina and her female co-workers. Marina also encountered a female clerk when she was at Manila. Opposite to the roles of the female in the story are those of the men. The boss of Marina is a man, and the Chief that she has to go through for approval of her application is also a man. There is a sense of patriarchy in the story proving that men are employed with higher paying jobs than the women.

Patriarchy is defined by Hartmann as a set of social relations between men, which have a material base, and which, though hierarchical, establish or create interdependence and solidarity among men that enabled them to dominate women (Hartmann, 1981: 175). She explains that although men of different classes, races, or ethnic groups have different places in patriarchy, they also are united in their shared relationship of dominance over their women; they are depended to each other to maintain that domination.

Marina’s boss uses his position to get what he wants from her by making her buy him a pair of Levi’s pants and Gabardine (an expensive type of clothing). Instances wherein the boss insists to pay and the clerk refuses is an all too familiar ritual that actually happens even to this time. Marina can only say ‘yes’ to her boss since, well, he is the boss.

Patriarchy in the story is highly depicted on Chief Lobo’s control over Marina’s labor status and sexuality. The Chief knows very well that Marina is desperate to attain her job promotion, and thus, uses this against her. He tells her to meet him at a restaurant for dinner, and later that night, forced her into bed with him as a favor for signing her papers. Despite her pleas, he gets what he wants.

Marina’s life is still oppressed by men even when she got back to her province. While walking to her house, a man comes out from the dark and steels her bag (which contained the papers for her promotion). The story ends with her empty handed, and with the fear of having to go through all those bad experiences the second time.

“The material base of patriarchy is men’s control over women’s labor power; that control is maintained by denying women access to necessary economically productive resources and by restricting women’s sexuality. Men exercise their control in receiving personal service from women, in not having to do housework or rear children, in having access of women’s bodies for sex, and in feeling powerful and being powerful.” (Hartmann, 1981: 178)

The author was able to depict a character of women, not solely oppressed by patriarchy, but with capitalism as well. Women continue to experience oppression because, according to Hartmann, women are incapable of resistance; which in turn is men’s advantage towards them (Hartman, 1981: 179). Marina’s character is a stereotype of common Filipina worker, who, even with a full-time job, could not cope up with the economic demands of the society. There is always oppression whenever she is faced with an employee of higher position than hers.

Post-Marxist Feminist Reading on the Progress. (2016, Dec 19). Retrieved from https://studymoose.com/post-marxist-feminist-reading-on-the-progress-essay 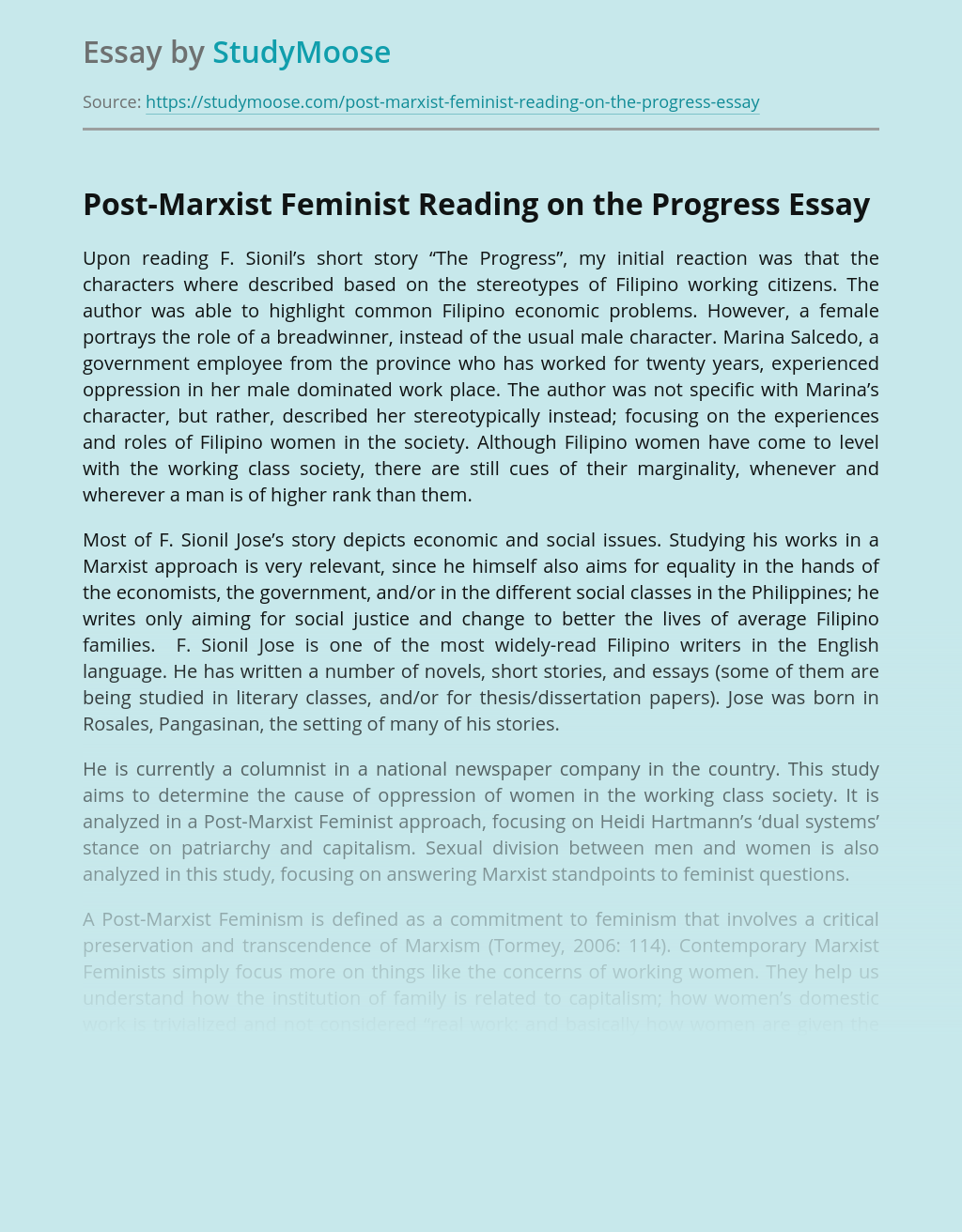 Since the 16th century, France has been the epicenter of high fashion. From elegant designs of the old royal court to the stylish threads made by contemporary French Fashion Designers like Christian Dior, Coco Chanel and Jean-Paul Gaulthier. I’m very sure we would all agree that location is a key factor in the success of...

The setting of this story remains in a small Mexican village. The walkways are cobblestone, the air is fresh and the sky is clear. From reading the story, I can tell that this town is extremely serene and desolate. Although the parish is bustling with secret eyes, the town itself is deserted and basic. The...

Explain and evaluate claims made by linguistic relativists regarding the relationship between language, thought and culture