Turn in your highest-quality paper
Get a qualified writer to help you with
“ Comparison Post-Colonialism and Post-Structuralism ”
Get high-quality paper
NEW! AI matching with writer

The main idea of post-colonialism is that it refuses the idea that nation-states are always the key actors in international relations and it rather focuses on the view on events from colonized parts of the world instead of the colonizing Western world.

The aim is to give the subaltern a voice so it can be heard. Post-colonialists argue that the effects of colonialism and imperialism are still being felt today among the countries that were colonized. According to Baylis, fiction, poetry are part of the scope of this approach (Baylis, 2011, p190).

Post-colonialism encourages the use of novels, diaries, poetry and testimonials.

These ideas and concepts have been used to produce new knowledge about world politics. Post-structuralism talks about different concept such as: discourse, deconstruction, genealogy and intertextuality. First of all, discourse will be briefly discussed. Discourse is defined as ‘a linguistic system that orders statements and concepts by the French philosopher Michel Foucault (Baylis, 2011, p. 170). It means that language is not only social but it is also essential to how we make sense of the world.

Genealogy is another of Foucault’s concepts and it is defined by Foucault as a ‘history of the present’ (Baylis, 2011, p. 171). Foucault analyses discursive practices in terms of their history or genesis, his aim was to show the history of truth claims. Besides there is also the concept of deconstruction. According to the theory of deconstruction of the French philosopher Jacques Derrida, language is made up by dichotomies and these dichotomies are not ‘neutral’ because of term is superior to the other.

For instance between the developed and the underdeveloped (Baylis, 2011, p. 171). Derrida thinks that texts create a clearing that we understand as reality. The central goal of post-structuralism is to problematize dichotomies, show how they work and thereby open op other ways to understand world politics. The theory on intertextuality is developed by semiotic theorist Julia Kristeva. She stated that each text is intertextual because they are all built from a mosaic of existing texts. All texts are connected to texts that came before them.

In this paragraph I will highlight and explain some similarities between post-colonialism and post-structuralism. To start with, both post-structuralism and post-colonialism are post-positivist theories. This means that in their view neither realism or liberalism is the full story and they rather focus on asking questions instead of claiming to provide universal answers. According to Baylis, both theories has provided ways to fill large gaps in IR knowledge and has put the state in its place as one of many sites of politics and relations in the field (Baylis, 2011, p. 93).

Although they are both post-positivist theories and have a lot in common, there are differences between these two approaches. In this paragraph I will highlight and explain some differences between post-colonialism and post-structuralism. First of all, post-structuralists focus on language. They see language as essential to how we make sense of the world (Baylis, 2011, p. 170). In relation to this focus on language there are four concepts that have been influential: discourse, deconstruction, genealogy and intertextuality.

Whereas post-structuralism maintains a concern with states’ constructions of threats and enemies, post-colonialism focuses more on culture and “the ordinary people” instead of the state. To conclude, post-structuralism and post-colonialism are closely related post-positivist theories that became a part of international relations in the late decades of the 20th century. Although the two approaches seem similar, they do differ in terms of their focuses. Post-colonialism focuses more on the view and theories of the colonized people rather than on the perspective of the colonizing “Western world”.

It also encourages the use of poetry, diaries and testimonials as sources of valuable information. The focus of post-structuralism is more on language and the four concepts that have been influential: discourse, deconstruction, genealogy and intertextuality. Another difference is focus on high and low politics. Whereas post-colonialism focuses on low politics, culture and the “ordinary peope”, post-structuralism focuses more on high politics and the concern with the states’ constructions of threats and enemies. 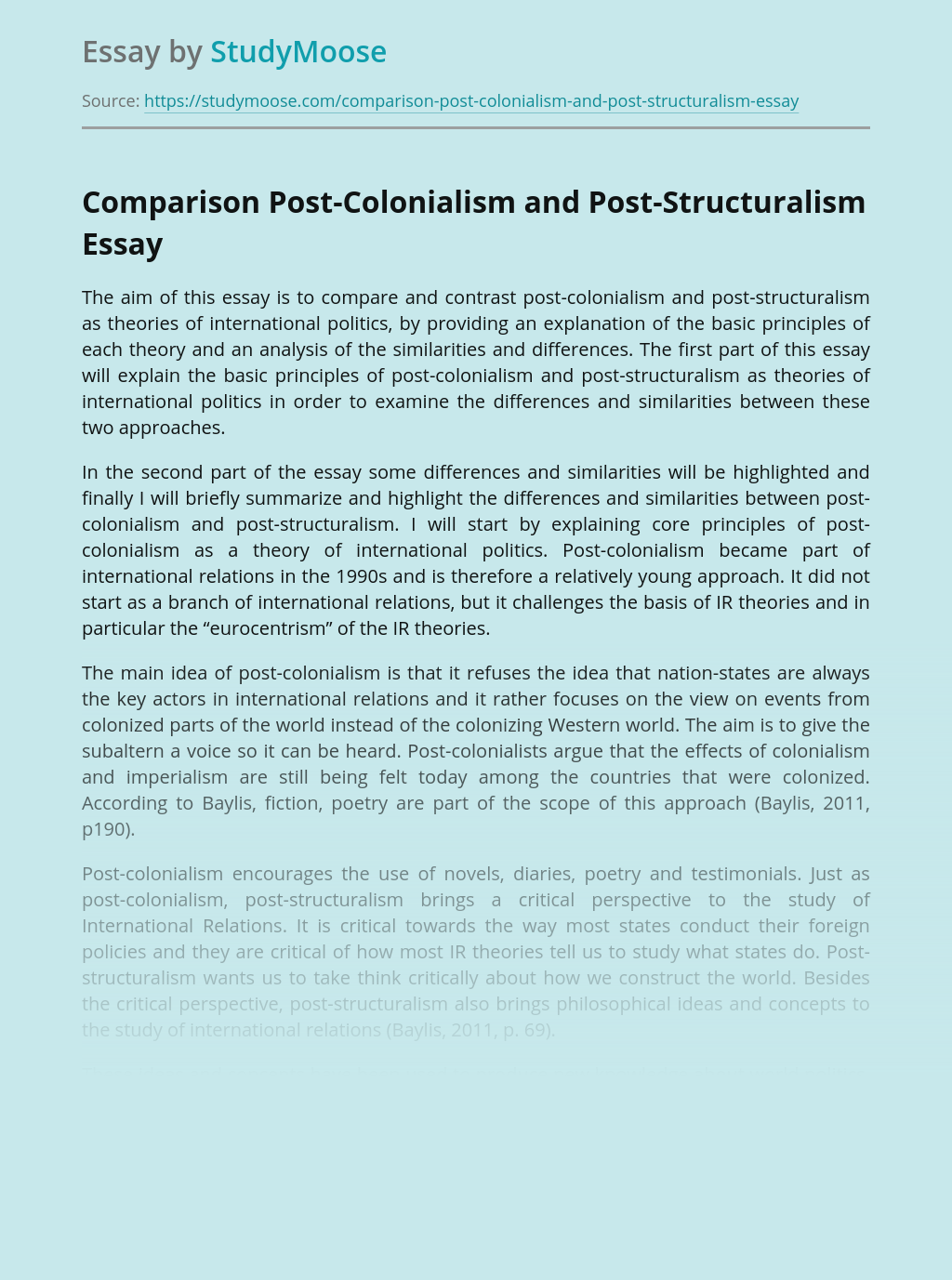 Turn in your highest-quality paper
Get a qualified writer to help you with
“ Comparison Post-Colonialism and Post-Structuralism ”
Get high-quality paper
Helping students since 2015
Stay Safe, Stay Original