“The God Stealer” is a short story by Filipino National Artist F. Sionil José. It is José’s most anthologized work of fiction. It is not just a tale about an Ifugao stealing a religious idol, but also about the friendship that developed between a Filipino and an American, a representation of the relationship that developed between the “colonized” and the “colonizer”.

The main characters in “The God Stealer” are Philip Latak and Sam Cristie.

Don't use plagiarized sources.
Get Your Custom Essay on The God Stealer Just from $13,9/Page

Philip, also known as Ip-pig, is an Ifugao who became a Christian and lived in Manila. By becoming a city dweller, Philip became less sentimental with his cultural identity, beliefs, and customs. His name was derived from the word Philippines. On the other hand, Sam Christie was an American who wanted to view the rice terraces of the Mountain Province (also known as the Cordilleras). He was also interested in purchasing an original figurine of an Ifugao god. His name was derived from Uncle Sam, a representation of the United States.

Philip and Sam were co-workers.

The story begins with two officemates, Philip Latak (an Ifugao from the Mountain Province now working in Manila) and Sam Cristie, an American on the bus to Baguio. Philip (Ip-pig) now lives in Manila against the wishes of his immediate family, particularly his grandfather who intended to bequeth to Philip his share of the famous rice terraces. They are on their way to Baguio for one purpose: Sam wants to buy a genuine Ifugao god as souvenir and Philip was to help him find an authentic one through his local connections.

Philip is a Christian who no longer has any respect or affection for the Ifugao customs and religion. He considers himself a city boy and has no inclination to return to mountain life. Despite this attitude, his grandfather is pleased to see him and decides to throw a big party in his honor. On the day of the party, Sam and Philip discovered that no Ifugao is willing to sell his god. And as a last resort, Philip offers to steal the god of his grandfather because he feels it would be his way of showing his gratitude to Sam for giving him a rise at work. The consequences of this act are severe.

The next day, his grandfather died because he discovered that his god was stolen. He also informs Sam that Philip will no longer be going back to Manila. Curious, Sam looks for Philip and found him working in his grandfather’s house. Philip sadly explains his reasons for choosing to stay in the mountains: “I could forgive myself for having stolen it. But the old man- he had always been wise, Sam. He knew that it was me who did it from the very start. He wanted so much to believe that it wasn’t me. But he couldn’t pretend – and neither can I. I killed him, Sam. I killed him because I wanted to be free from these. These cursed terraces because I wanted to be grateful. I killed him who loved me most…” a faltering and stifled sob.

In the dark hut, Sam noticed that Philip is now attired in G-string, the traditional costume of the Ifugao. Furthermore, Philip is busy carving another idol, a new god to replace the old one which Sam will take to America as a souvenir. Philip’s repudiation of his Ifugao heritage may be extrapolated to mean that Filipino’s rejection of his own roots and its replacement with colonial values.

Philip’s denial of his Ifugao custom may mean that Filipino’s rejection of his own roots and its replacement with colonial values. It is significant that Philip steals the God for Sam out of gratitude. Thus is it the Filipino gave up his most precious symbol of his past traditions to the Americans as an expression of gratitude? And by giving this symbol away, the Filipino murders his own roots. Again, the colonial culture has been a negative force in the Philippine History and the true Filipino is the tribal Filipino, or the poor Filipino least touched by colonial culture.

Philip’s act of thievery represented the Filipinos’ giving up of their past tribal origins and traditions, only to be replaced by an “unnatural” culture brought by colonialism. At one time in history, colonialism brought to the Filipinos a state of confusion, troubled emotions, helplessness, torment, embarrassment and the inability to embrace the past. It is symbolic of the foreigner’s exploitation and imperialistic ambitions on the Filipino.

But it’s not only about the Filipino culture and tradition it is also about the good characters of the Filipino people, the life they have suffered, the difference between the Ifugao belief and the stranger, about the love of Filipinos in their native land, the contentment of Ifugao of what they have. 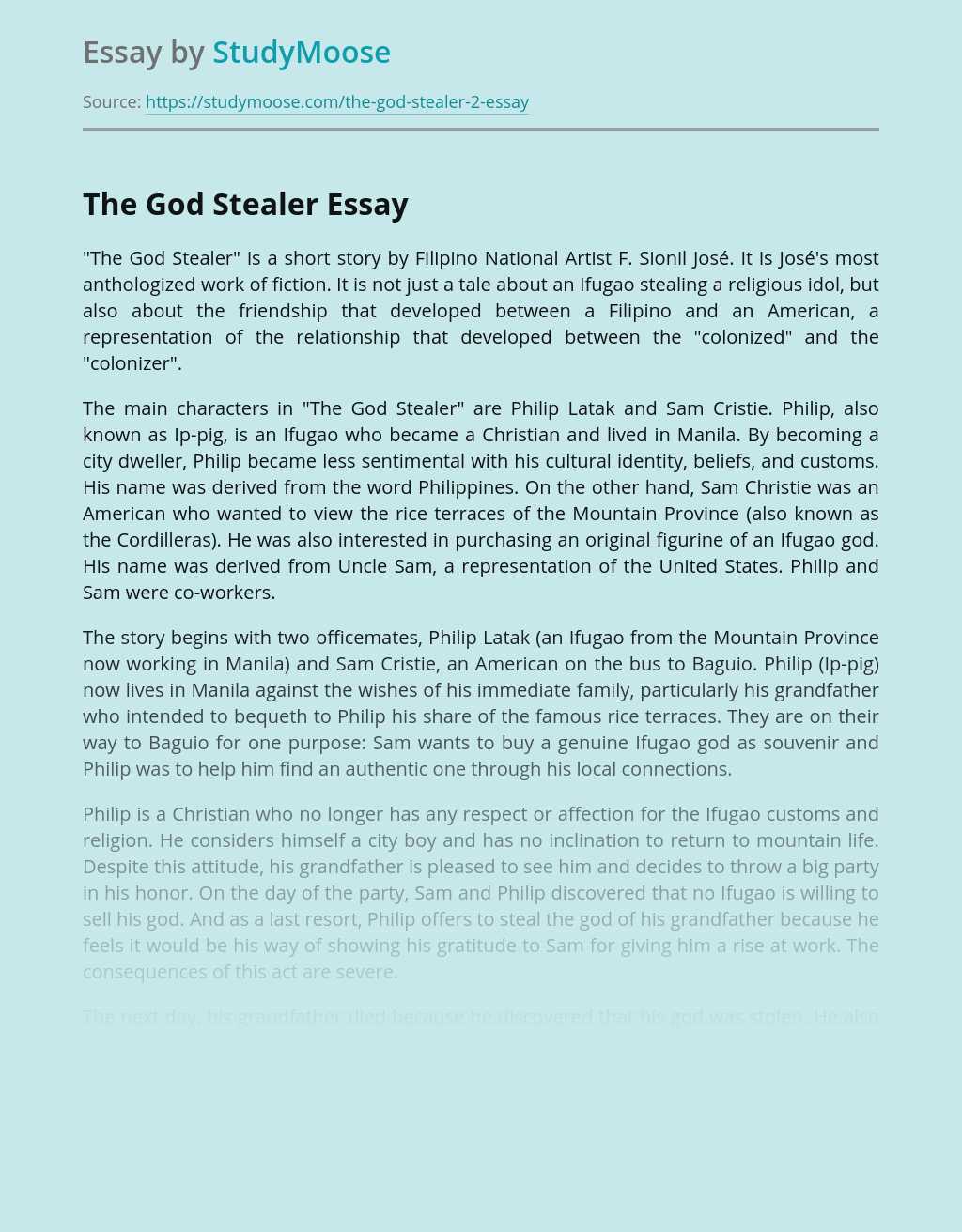 Waiting for Godot by Samuel Beckett

Rate this post The tragicomedy Waiting for Godot, written by the Irish playwright Samuel Beckett, is one of the pioneering pieces of literature which were a part of a new genre, called Theatre of the Absurd. Upon reading it, one can easily infer why this is the case- throughout the 2 acts the play consists...

Rate this post The poet explores the relationship between cultural identity and language. When you speak a language you likewise learn its culture. Lines 19 and 20 amount up the style. Which language has not been the oppressor’s tongue? When another nation is the conquerer, that nation brings its language and culture to those who...

Rate this post Jonah and the whale is a very popular children’s story, the classic Sunday school lesson. However, many children grow up with the idea and picture of Geppetto and Pinocchio being swallowing by the whale and sneezed out back onto shore. Though we may not want to tell our children every gruesome detail...

The Role of God

Rate this post For years Christians have argued about what role God has in humans attaining salvation. The most popular belief in American culture is the concept of free will. Free will is the belief that coming to Christ and being saved is a freewill choice of the person. Most churches believe this concept to...

A God Divided: Understanding the Differences Between Islam, Christianity and Judaism

Rate this post Christianity, Islam and Judaism, are the world’s greatest monotheist faiths. These faiths have some similarities and differences. In this paper analysis of what is common amongst Islam, Judaism and Christianity is analyzed at an in-depth level. Islam is the world’s largest religion after Christianity. It is a monotheistic faith that traces its...