The Functionalist and Marxist views on the Family

Functionalists argue that societies consist of inter-related social institutions such as schools, mass media, political systems, the Church and the family each of which contribute positively to the maintenance of stability of society as a whole. Broadly speaking it is assumed by functionalists that societies operate in the interests of all of their members so that there is no reason for fundamental conflict in society. Instead there is a high degree of consensus that societies are organised efficiently and relatively fairly.

Don't use plagiarized sources.
Get Your Custom Essay on The Functionalist and Marxist views on the Family Just from $13,9/Page

According to Herbert Spencer, the family performs functions which are necessary for the society, as a whole, to operate smoothly with little or no conflict. He used the analogy of an organism to explain the operation of the society. They believe that all parts of the family interrelate and if one thing does not work, the whole family will become dysfunctional. In this way, functionalists say the family is like an organic analogy-where everything in society depends on each other.

George Murdoch, Talcott Parsons, Ronald Fletcher, Young and Willmott are the main theorists who have functionalist perspectives on the family.

When analysing the family, the functionalists focus on two main areas. Firstly is the functions that the family provides and secondly is the functional relationship between the family and other social systems i.e. the economy. Murdoch argues on the basis of his study, using 250 societies, that the nuclear family was a universal social institution and that it existed universally because it fulfilled four basic functions for society. He believes that the family performs four central functions: sexual, reproductive, economic and educational (socialization). Sexual refers to the sexual gratification of the parents of the family. Reproductive refers to the family producing a new generation that will go into society and take up jobs. In the economic role, the family is a consumer and also provides workers for the capitalist system. The family is also an educational institution that teaches the new generation the norms and values of society.

The functions of the family play an important role in the creation and maintenance of order and stability in society and functions for the wellbeing of the individuals as well as society. However, Marxists say that the family’s purpose is to maintain the position of the bourgeoisie. So it is like a prop for capitalism. Unlike functionalists, Marxists do not agree with value consensus and the promise of meritocracy. From a Marxist point of view society operates largely for the benefit of the bourgeoisie. This makes the family responsible for passing on bourgeoisie norms and beliefs. Another functionalist theorist who put his ideas on the purpose of family life forward is Talcott Parsons who metaphorically relates the family to a warm bath. As he believes it can be used by individuals to physically relax, unwind, and generally de-centre themselves from the capitalist world. Due to obvious reasons this theory is referred to by sociologists as the ‘warm bath theory’ and is frequently used in order to explain why family institutions are essential, for society as a whole to function effectively.

Marxists also believe that the family cushions the main provider. This is similar to the functionalist “warm bath theory”. After a hard day of being exploited by the main provider-the bourgeoisie, usually the male will be comforted by his family. The family is there to relive the pressures so that he can go into work the next day feeling less stressed than when he left the evening before. Parson’s functionalist views on the family also include the family having two major roles, the male instrumental position and the female expressive role. The theory is that the male is the decision maker the female the problem solver and that this is essential to keep a family happy and together. According to Parsons, as society becomes modernized, the family specializes in fewer functions. However, it continues two basic and irreducible functions.

These are the socialization of children and the stabilization of adult personalities (warm bath theory). Although this idea seems to make some logical sense, it is highly criticized by the Marxist, Zaretsky, who dismissed the theory mainly because the family itself can often be the cause of emotional upset and stress within individuals. He argued that it is not always possible for the family to sustain the pressure and cushion all the shocks and frustration of the workplace. Ronald Fletcher also analyses the family from a Functionalist perspective but he denies that the modern nuclear family has lost functions to the extent suggested By Talcott Parsons. Thus Fletcher argues that even if the family is no longer a unit of production, it is a unit of consumption which can be appealed to by advertisers keen to sell a wide range of household appliances so as to maintain profits for the bourgeoisie.

There was a time of communal promiscuity and so there was no need for marriage since the idea of private property did not exist. However, as time passed, he realized that the monogamous nuclear family developed in order to ensure property inheritance was being passed on to the true heirs. Husbands needed more control over their wives so there would be no doubt over the paternity of their offspring. The monogamous family was the most efficient way for this purpose. Young and Willmott realised the changing structure of the family where the roles of husband and wife are now becoming increasingly similar (symmetrical). On the other hand Marxists believe that the family will always prevent women from achieving full equality. The main views of the Marxists is that the family serves the requirements of the capitalist society and the family will always portray male dominance.

In a capitalist society, people either own the means of production and be members of the capitalist class (bourgeoisie) or own their labour power (proletariat/working class) which they sell for wages to those who own the means of production. Capitalism is an exploitative, unjust system which generates social inequality and poverty for millions of members of the Proletariat. In this conflict between the different class interests, social order is maintained through what Marxists termed ‘ideology’. As used in Marxist theory, an ideology is a coherent act of ideas, which are not necessarily accurate, but which serve to advance or defend the social position of a particular group, in this case the ruling class. This ideology gives the working masses a state of false consciousness, where the present state of social organization is seen as normal, preventing them from realising where their true class interests lie. Neo-Marxist, Gramsci argues that false consciousness is maintained through hegemony.

That is, active consent to one’s own domination by a ruling class without challenging the unjust social order. Whereas according to Functionalists the socialisation process as it operates within the family is seen as encouraging conformity with desirable norms and values which contribute to overall social stability, according to Marxists the socialisation process in the family results in the transmission of a ruling class ideology whereby individuals are deceived into accepting the capitalist system and the dominance of the capitalist class more or less without question. The founder of Marxism, Karl Marx, based Marxism around capitalism and said that in order for the country to become communist, the proletariat would have to overthrow the bourgeoisie.

Communism is the idea that everyone in a given society receives equal shares of the benefits derived from labour. Whilst functionalism has been criticized for ignoring conflict within the family and assuming that family life is a safe haven for everyone, it can be also be said that Marxists are too deterministic as they exaggerate the importance of the economic system on family structures. Although the two theories are very opposite to each other, as functionalists give a positive view on the family and Marxist is quite negative about the family, both are fairly dated considering the changes within the family and the rise of alterative types of household.

The Functionalist and Marxist views on the Family. (2016, Aug 31). Retrieved from https://studymoose.com/the-functionalist-and-marxist-views-on-the-family-essay 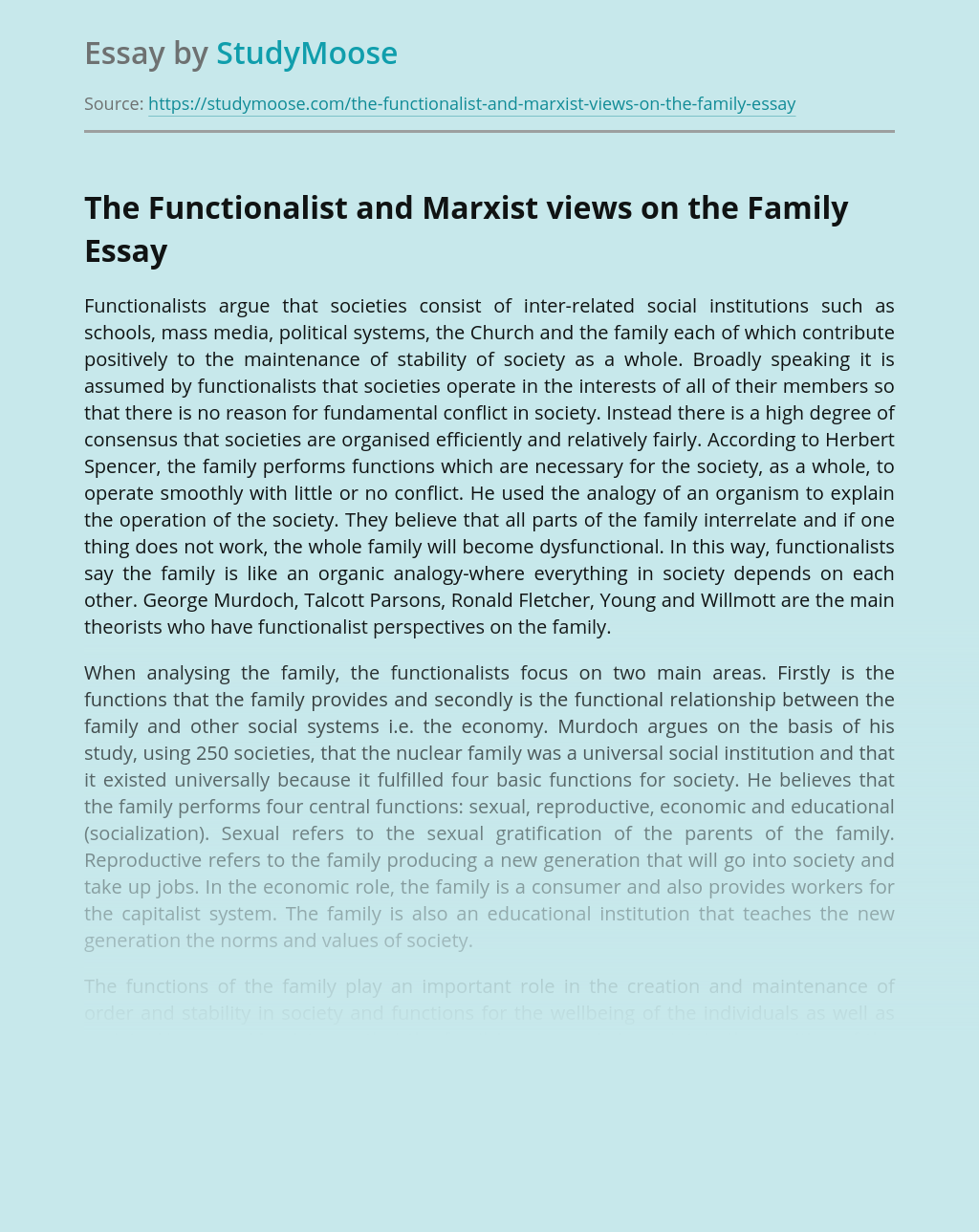 Functionalist And Marxist Perspective On Religion

Also known as the social conflict approach, critique of capitalism. According to Marx, in a capitalist society, religion plays a critical role in maintaining an unequal society, in which certain groups of people have more resources and power than other groups of people. For Marx, Ideology is a belief system that changes people’s perception of...

Modernization is the process in which social and economic change is obtained through industrial revolution, urbanization and other social changes that alters people’s lives. Modernization promotes individualism over the unity of traditional communities and encourages rationality over traditional philosophies. Modernization can have both positive and negative effects on society and can often bring about controversy....

Zinn opens chapter with the recognition that “war and jingoism might postpone, but might not fully suppress, the class anger that originated from the truths of normal life”. Regardless of the quick interlude that temporarily stopped class dispute, the problems in your home had actually never ever been dealt with and resurfaced with a revenge....

First published 1990 by Routledge 11 New Fetter Lane, London EC4P 4EE Simultaneously published in the USA and Canada by Routledge 29 West 35th Street, New York, NY 10001 This edition published in the Taylor & Francis e-Library, 2001. © 1990 Peter Saunders All rights reserved. No part of this book may be reprinted or...

Life in a Centrally Planned Economy

Assignment: Thinking back on the information you have learned in this unit about different types of economic systems, imagine that you are moving from the United States (which has a mixed economy) to a country that has a largely centrally planned (or command) economy. Then in a short essay of at least two paragraphs, explain...