The Functionalist Perspective on the Role of Education

Functionalist are macro sociologist so they look at how education contributes to the whole of society. As they are consensus theorist they believe that education benefits society. The first functionalist sociologist is Durkheim ,the founding farther. He said that education passes on the norms and values of society. They do this thought the teaching of history to give the children a sense of commitment as they can see that they are part of something much bigger than just themselves. This helps create social solidarity, where individuals are united together into a whole.

Don't use plagiarized sources.
Get Your Custom Essay on The Functionalist Perspective on the Role of Education Just from $13,9/Page

Another thing that Durkheim suggest education does is prepare individuals for their social roles. The individuals learn to co-operate with people who are neither kin nor friend under a frame work of rules. In the adult world children work within a frame work of rules and also co-operate with people who aren’t really friends. This is how school is seen as a miniature of society. Postmodernist would argue that in society we have a diversity if values so how can school pass on values if they aren’t the same.

Another functionalist sociologist is parsons he agrees with parson that education helps pass on values.

He said that education acts like a bridge, a bridge between particularistic values in childhood and universalistic values in adulthood. So therefore education helps individuals go from being treated like a particular child by their parents to being treated as equal as others no matter how their parents treat them. Another theory of parsons is that education is meritocratic. Where pupils are rewarded for the hard work that they do. Marxist however argue that meritocracy is a myth because education only rewards the middle class and fails the working class and the working class don’t get rewarded for the work they do.

The last two functionalist sociologist are Davis and Moore they say education sifts and sorts pupils according to their ability, this is formally known as role allocation. The more intelligent and gifted pupils are allocated to the more important jobs this is done thought grading and streaming from exams, test ect. Davis and Moore also say that education gives individuals equal opportunities to success if people don’t succeed its usually down to the fact that they didn’t put enough effort into their work so their failure is down to their own responsibility.

Interactions would disagree with Davis and Moore they would say that people fail due to the label that the teachers and others have given them as they didn’t give them the help that they gave to the other students that they believed would succeed. Overall functionalists believes that education is helpful in the future for the individuals. Equipping them with the correct skill needed for later life. They believe this is done thought the passing on of societies culture.

The Functionalist Perspective on the Role of Education. (2016, Sep 15). Retrieved from https://studymoose.com/the-functionalist-perspective-on-the-role-of-education-essay 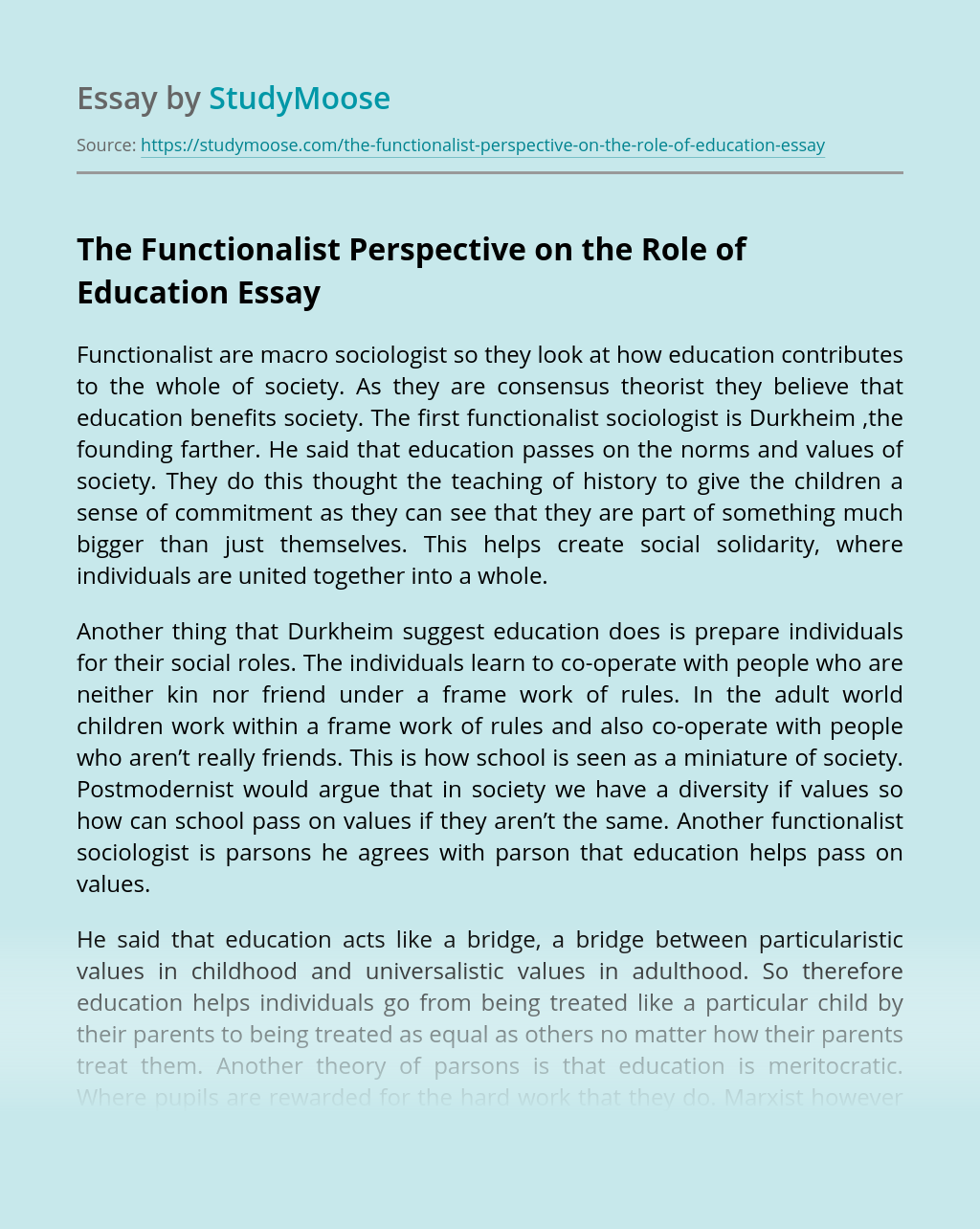 Past formal or informal language learning experiences.(any language which is not your first language.

My mother tongue is Bengali which is being spoken in our house since my childhood. I have done my preliminary education from Doon. While schooling I’ve studied in English as my first language and Hindi being the second. Thereafter after completing my secondary education I came to Kolkata where in I got a chance to...

View sample
Get Essay
What makes an effective teacher

Teaching is one vocation that is hard to define if you look it up in the Oxford English dictionary a Teacher is defined as “A person who teaches, especially in a school”. This definition is very vague and leaves a lot of room for expansion on what a teacher actually is, on the other end...

Prayer is a way of communication between me and God. It allows me to talk to Him and listen to Him so that I can establish a closer relationship with Him. As I went about my CLE classes, I learned that there were proper ways and intentions that are needed in order to make the...