The Functionalist Theory of Stratification

The Functionalist theory of stratification is more relevant According to Haralambus and Holborn, stratification is referred to as a particular form of social inequality. That is, the presence of distinct groups which are ranked one above the other in terms of factors such as prestige and wealth. Functionalism and Marxism are both sociological perspectives that ask and state certain theories about society and the people that live within it.

They both explain how society influences people and how people influences society.

Don't use plagiarized sources. Get your custom essay on
“ The Functionalist Theory of Stratification ”
Get custom paper
NEW! smart matching with writer

According to Marx and Engels,1970, “the driving force of virtually all societies is the conflict between the rich and powerful minority who control the society and the powerless and poor majority who survive only by working for the rich and powerful. In studying Karl Marx’s perspective on stratification, you will clearly recognize that he believed whatever economic system was the norm at any one time in history is what determined the nature of the classes of people in that society.

In other words it determined the social stratification of society as a whole. Marx saw that the current economic system of industrialized capitalism had created two major classes of people and one relatively minor one.

The upper class he called the Bourgeoisie were the class of people who owned and controlled the means of production of society, The lower class he called the Proletariat were common laborers who owned nothing but the right to sell their own labor and third class which he called the petty Bourgeoisie or small capitalists were people like lawyers, doctors, architects, small business owners and other similarly situated people who were wealthier than the common laborer but did not own or control the means of production.

Functionalist views society as a whole and that any theory that arises has to operate with the society as a whole. There are three main Functionalists that dealt with the stratification theory and these were Talcott Parsons, Kingsley Davis and Wilbert Moore. According to Davis and Moore, filling the positions within s social structure with the most talented people is a basic need of sny society and so it is accomplished through the unequal distribution of rewards. People have to be motivated to fill certain positions and perform their duties. Stratification, or unequal distribution of rewards ensures that the most talented and trained individuals will fulfill the social roles of greatest importance and thus, stratification encourages all members of society to work to the best of their ability.

The two theories are so different that they only have similarities. Marxist sees society as a domination culture where one group stands above the rest; The leaders are not sharing the subordination and misery of the working class, whereas the Functionalist believes that society is one of shared values; it works together and shares perspectives to reach common ends. Functionalists also views society as an organism with each part of society being a necessary piece. Marxism has been extremely evident in the Caribbean even since the slavery period. The bourgeoisie European planters exploited the black slaves during the time of the plantocracy system. This system of stratification clearly shows multiple traits of the Marxist theory. This system has served as the building blocks of the modern Caribbean society we live in today.

There are multiple bourgeoisie-proletariat systems throughout the Caribbean but are less evident than during the times of plantocracy. However the Caribbean region is governed by functionalism which is portrayed at a larger scale as our society is made up of interdependent parts relying on each other. We are molded by the influences and organizations in society and less of what the higher classes portray so how can there be a claim that Marxism is more relevant than functionalism in the Caribbean system of stratification? In conclusion, both theories attempts to explain how society influences people and similarly how people influences society, but when examining the stratification system in the Caribbean, the functionalist theory of stratification is more relevant than the Marxist theory because in the Caribbean you will find more class societies being meritocracies than there is class conflict

The Functionalist Theory of Stratification. (2016, Apr 29). Retrieved from https://studymoose.com/the-functionalist-theory-of-stratification-is-more-relevant-essay 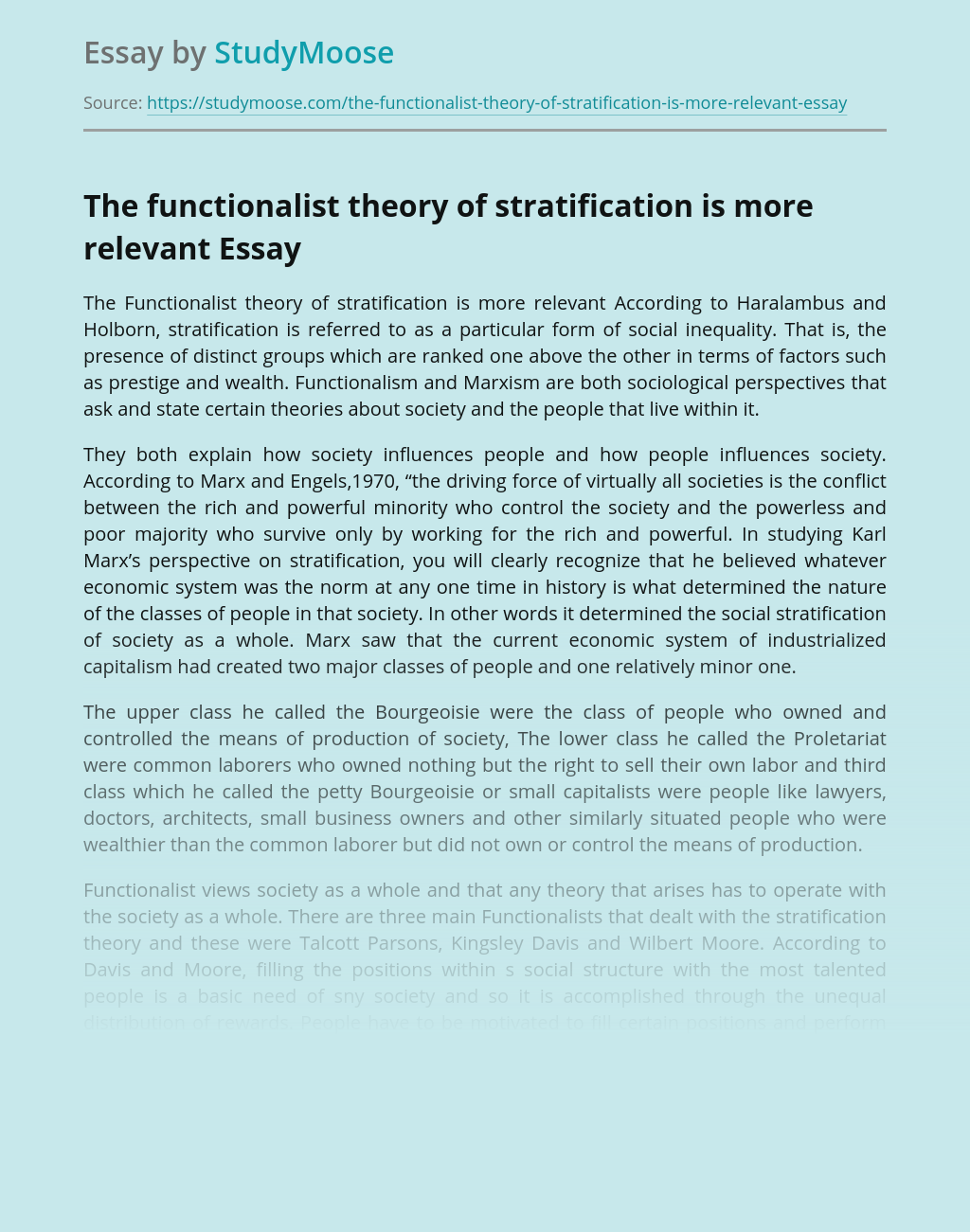