“ Explain the neo-malthusian theory with relevance to the current world situation” The term neo-Malthusianism was first used in 1877 by Dr. Samuel Van Houten, one of the vice- presidents of the Malthusian League. Neo-Malthusian theory is derived from Thomas Malthus’ proposition that limited resources keep populations in check and reduce economic growth. Neo- Malthusianism was not just a campaign in favour of birth control; it was particular perspective on the effects of population on human conduct and behaviour. It tried to justify the growing impoverishment of working people by pseudo-scientific theories of “absolute over-population, and diminishing returns on the soil”.

Don't use plagiarized sources. Get your custom essay on
“ Neo-malthusian theory ”
Get custom paper
NEW! smart matching with writer

The neo-Malthusian movement therefore was different from conventional Malthusian position on two counts: it stressed on birth control methods and also identified the working class with the problem of overpopulation. The overcrowded industrial slums were identified as sites of moral degeneration. However, some key facts on the neo-malthusian perspective must be identified. They believe that everyone can contribute to society, secondly, population increases geometrically and food supply/ subsistence increases arithmetically.

Also, they advocated race discrimination and thought that Birth Control, war epidemics are used to promote capitalism and alleviate misery of the masses. In contemporary societies today, it can be observed that there is an existent division of people, whether it may the rich or the poor, financially stable or financially unstable, or most commonly known, The Bourgeoisie and the Proletariat, as mentioned by Karl Marx. Neo-Malthusians strongly believe that all the individuals in society can contribute to society no matter the division and which class they may fit in ( upper or lower class).

They did not specifically measure the amount of contributions that each class were able to present but mainly focused on how the contributions of one class was beneficial to the other, (lower to upper), Marx would however argue that the Bourgeoisie only engage in such activities as it is more beneficial to them and it only helps exploit the Proletariat. It can be observed in society today, that the proletariat are exploited through a term called alienation, this is where the proletariat are cut off from consuming the goods they produced.

For e.g. sweat shops in China, proletariat are forced to produce goods/services for little to almost no income and after the good has been produced they are unable to obtain it as it is too pricy. It must be noted that there has been change in society today, as some individuals of the lower class are able to experience upward social mobility, and thus this reinforces the neo-malthusians suggestion that everyone can contribute to society, not only to the benefit of the capitalists but to the proletariat themselves. As it pertains to the population and food supply it can be observed that in societies today, 3rd world societies to be specific, the food supply to population ratio is quite uneven. The Neo-Malthusians, who agree with Malthus, would not only argue that this is due to the population growing at a faster rate than the food supply but this is due to the drainage of resources. As it known, that the world has limited resources, and they would argue that these limited resources help keep population in check. They state that population increases geometrically and food supply/ subsistence increases arithmetically.

Subsistence in this instance may be defined as “just enough” for human survival. As it pertains to the process where resources become exhausted, it can be noted that in many third world countries of the Caribbean (Antigua, Dominica) , Agriculture is used as a major source of income, however due it being done over and over the soil is ripped of it nutrients which is needed to help grow various crops. Even some simple resources are becoming scarce to societies today. For e.g the current situation in Antigua and Barbuda, where the population there are currently experiencing a shortage of portable water even though water by itself is there in abundance. Even though they have the technology to produce such resources they are in no economic position to maintain the technology. However, critics may argue that there are mechanisms put in place to help sustain goods(food). Namely, the increase in prices of various products (inflation), they would state that this could cause individuals of the population to purchase/consume smaller quantities of different goods and would therefore cause the ratio of population growth and food supply to turn towards a more even figure.

However, the neo-Malthusians may however argue that this doesn’t help the problem of excess population growth since the individuals who produce most of the population (lower class) would not be able to afford these goods. The socialists consistently maintained that the hue and cry over population was a way to divert the focus from the core issues of inequality and class struggle. For the socialists, the real issue was unequal access to resources than rising population. According to them, there was enough for everyone, provided resources are shared equally. The problem lay in the lack of equal distribution, with the bourgeois and the propertied class unwilling to give up the large share of resources under their control. As noted The neo-Malthusian movement was different from conventional Malthusian position on two counts: it stressed on birth control methods and also identified the working class with the problem of overpopulation. The overcrowded industrial slums were identified as sites of moral degeneration. This diverted the debate on population from issues of poverty and unequal access to resources, to birth control per se. In fact, the assumption was that access to commons or availability of resources would give the poor little reason to abstain from having more children. Neo- Malthusianism thereby reinforced the ideology of private property, individualism and capitalism.

The neo-Malthusian position found favour with the elite sentiments on the issue of overpopulation. The elite, threatened by the growing numbers of commoners, considered birth control as an important means of checking future conflict over their property. It can be observed that such an argument is true, as in societies today, many individuals seek to install security systems on their homes, cars and other fixed assets, these individuals are usually members of the upper class. They do this as a means to try to prevent members of the proletariat from obtaining their assets. Theft is a common issue in most societies today, one problem can also lead to another, theft to homicide. All of which are blamed on the proletariat as they are unable to provide for their families after they engage in mass reproduction. For example, in third world countries today it is usually children of the poor that drop out of school at an early age that engage in violent activities and are usually beggars at the side of the street. Paul Ehrlich is a very vocal and prominent neo-malthusian.

He wrote the book “Population Bomb” which warned us of a coming mass starvation because of over-population and pushed population control (abortion and birth control). He encouraged government intervention into the population issue. Lastly the Neo-Malthusians advocated race discrimination, it can be observed in societies today that there is not only a division of class, but also of race and color (Black and White). This may have stemmed from slavery however and is still present in society today. It is usually the blacks who partake in agriculture and hard labor work while the whites who are in the offices and even though their work may not be as hard they still gain higher incomes. No need to debate as the top three richest individuals in the world today are White. In conclusion, it can be observed that the neo-malthusian theory follows Mathus’ theory that the world’s resources will not be able to support the population at a certain point, and the population will turn to chaos, finally resulting in extinction of humans. It indicates a correlation between food and population growth, and lastly they saw abortion and birth control as a way to slow this decreasing resource that the future holds.

Neo-malthusian theory. (2016, May 20). Retrieved from https://studymoose.com/neo-malthusian-theory-essay 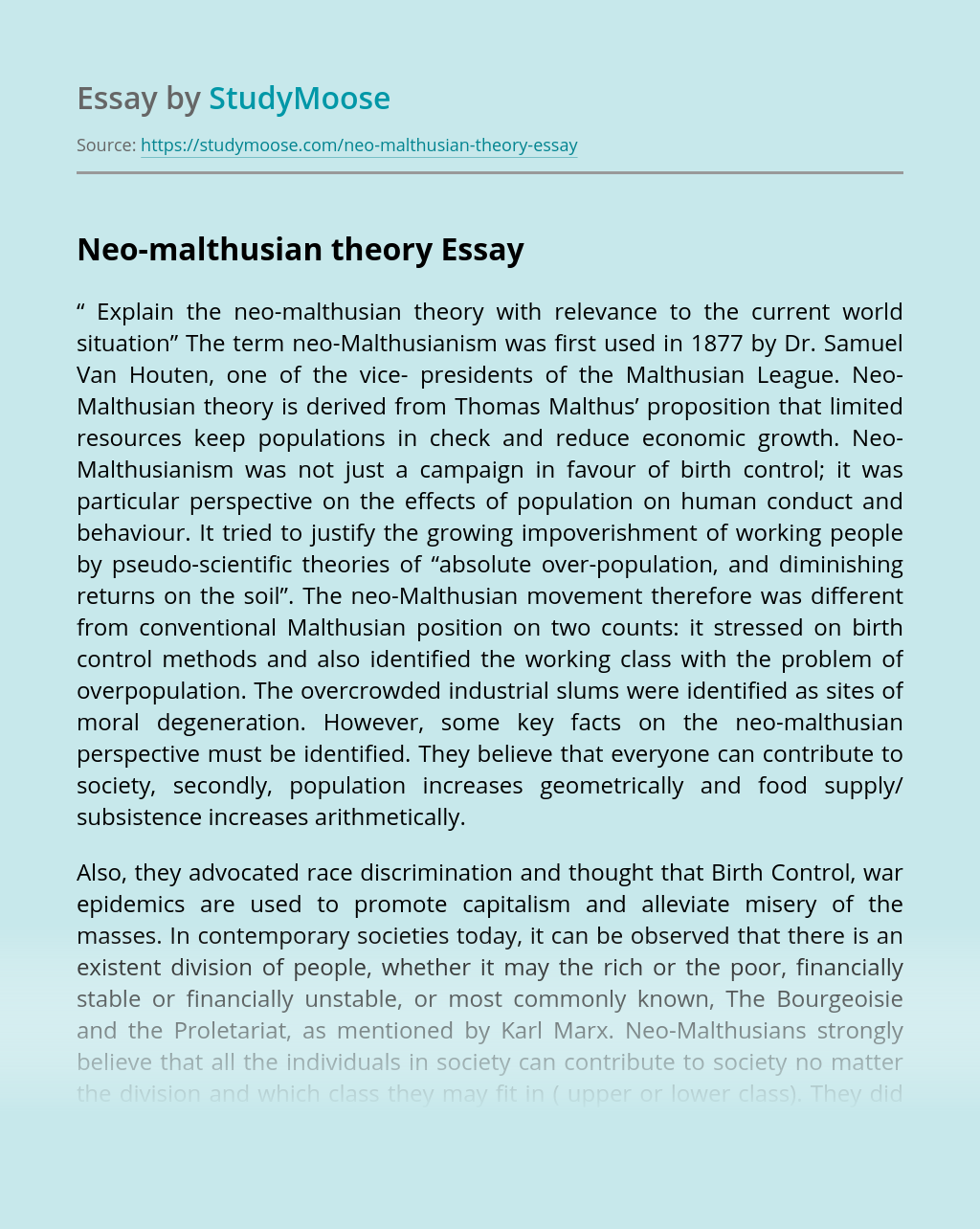