Often, man resorts to story-telling as a way of reconciling with a formidable incident in the past. By re-telling the story to another party, he comes to accept that this is a reality to be faced. He realizes that acceptance, rather than denial, is the best way of going about this trouble. Aside from the rehabilitating ability of story-telling with its contributory effect in dealing with a painful memory, others simply do this as a way of remembering.

Concretizing the past as a piece of literature would ensure that the incident would not just be buried in the recesses of the memory; that it would be kept alive and the pains and suffering would not be without significance.

Don't use plagiarized sources. Get your custom essay on
“ Kindred: A Neo-Slave Narrative ”
Get custom paper
NEW! smart matching with writer

In this light, it would come clear for readers how and why the proliferation and the presence of slave narratives came about. One may think that with the end of the painful era of slavery, all dialogues and discussion about the subject would also desist.

For the African-American slaves and their descendants, this was not the case.

The words of Robert Crossley of the University of Massachusetts rerated the thought: “First-person American slave narratives should have ceased being written when the last American citizen born into institutionalized slavery died. But the literary form has persisted, just as the legacy of slavery has persisted, into the present. ” To be more specific, the birth and popularization of the slave narratives started in the nineteenth century. James Olney stated that each narrative “a unique production” as an autobiography, and “is not every autobiography the unique tale, uniquely told, of a unique life?

” (148). Therefore, the uniqueness of each narrative from the others is a trait of this genre, as it narrates the experiences of the writers which are unique to another’s. However, certain characteristics are evidently similar in the work to be considered a part of the genre. For one thing, it has to tell the story of a black slave’s struggle for literacy and freedom, while testifying against the “peculiar institution/’ which in practice meant human bondage and humiliation (Gates, “Introduction” ix).

The authors base the structure of their fictional work on the oral histories and existing slave narratives to make sure that the story would still echo true events in the historical sense. The birth of this sub-set of the slave narrative genre may be attributed to the void that it fills, or attempts to fill. Anita Wholuba in her paper said that the chasm which is attempted to be explored and filled is the ironic presence of silence in slave narratives, despite of the voice earned by the slave narrative writers.

Wholuba said that “while a significant number of scholars have established that certain silences exist in the traditional narrative of history, neo-slave narrative authors have committed themselves to the task of identifying and sounding those silences where the representation of the American slavery era is concerned. ” A novel titled Kindred, penned by Octavia Butler, is among the body of neo-slave narratives published in the last century. It was published in the year 1979, and speaks of an African-American woman’s sojourns to the past.

The character Dana, lives in contemporary California, but is transported back in time to the antebellum South. In her involuntary travels to the past, she understands how difficult the situation for people before her ancestors actually was. As I was reading Kindred, I had the initial impression that it was just to be appreciated for its science fiction values. Although the science element in this novel was not so much as it was felt in other novels from the same genre, her meshing of science fiction and history was an innovation that should be noted and lauded.

In any case, what caught my attention more was the similarity Kindred has with other novels we have read subsequently in the class, which were the Narrative of the Life of Frederic Douglass, Incidents in the Life of a Slave Girl, and Up from Slavery. Evidently, there were characteristics of a slave narrative in the novel Kindred. However, the text didn’t meet the five criteria for it to be called a slave narrative, the genre which the other works fell under. As Kindred is a work of fiction, it would naturally be categorized as a neo slave narrative, a concept I came to be familiar with after research.

Kindred as a neo-slave narrative With the plot and simple and direct language employed by Butler, Kindred could not be missed as a neo-slave narrative. Characters that are actual African-American slaves and Caucasian American masters and violence inflicted on slaves are presented in the novel. On a deeper sense, on the other hand, the novel follows the same pattern present in other slave narratives. Wholuba in the same paper added that although the text refers to other slave narratives such as the work written by Douglass’, in an effort to explore existing themes, the novel still manages to introduce new themes.

The new themes that this novel presented, according to Wholuba still, include a more blunt “analysis and depiction of the slave’s struggle for sexual autonomy, the experience of middle passage, and the concept of memory. ” As was mentioned, the novel Kindred follows the typical pattern for a slave narrative, and this will be the thesis of the paper. It will attempt to discuss and prove the characteristics of a slave narrative present in Butler’s popular piece of art. Another writer mentioned some of the other patterns commonly found in neo-slave narratives.

Lysik mentioned in her essay that neo-slave narratives portrayed the “vital slave culture” in a positive light as it could serve as a means of surviving the brutal reality they are subjected to (Lysik). What this implicates is that the writers of the neo-slave narratives provide a new perspective in terms of viewing the arduous tasks and obligations slaves have to fulfill. Most authors show how slaves then turn this otherwise appalling condition to something that they could actually seek refuge in.

First and foremost, the novel carried a prefatory statement by a person from Caucasian American race attesting to the authenticity of the author. The second criterion which has to be satisfied is the movement from slavery to freedom. Kindred has been classified under slave narratives by critics as leans toward the freedom narrative category. This concept will be further discussed in the following paragraphs. Aside from this, the most obvious criterion which the novel has to satisfy is that the story should portray the physical, emotional, and spiritual deprivation of slavery.

Kindred, undeniably, does not fall short on this end. As the journey through time and space allows Dana to witness the events during the period of slavery firsthand, the novel is rich with narration regarding the struggles of the African-American slaves. Through Dana’s experiences, the tales of the different forms of deprivation and coercion were regaled to the readers. James and his contemporaries talked of this in a paper, saying that many forms of violence and intimidation were observed to be used to maintain white dominance in the slave economy through the eyes of the character of Dana.

These “preservation” measures, so to speak, included the sexual violence against black women that was common during slavery, the assault on black families, the difficult choices that black people were compelled to make in acts of love, survival, and resistance, and the outcomes of internalized oppression (James, et. al). A specific scene in the novel would be that time when Dana personally witnessed the beating of a slave. The slave was hunted by white patrollers because of a crime that would seem absurd for people of the modern times: the slave was found spending time with his wife in their own bedroom without the slave master’s permission. 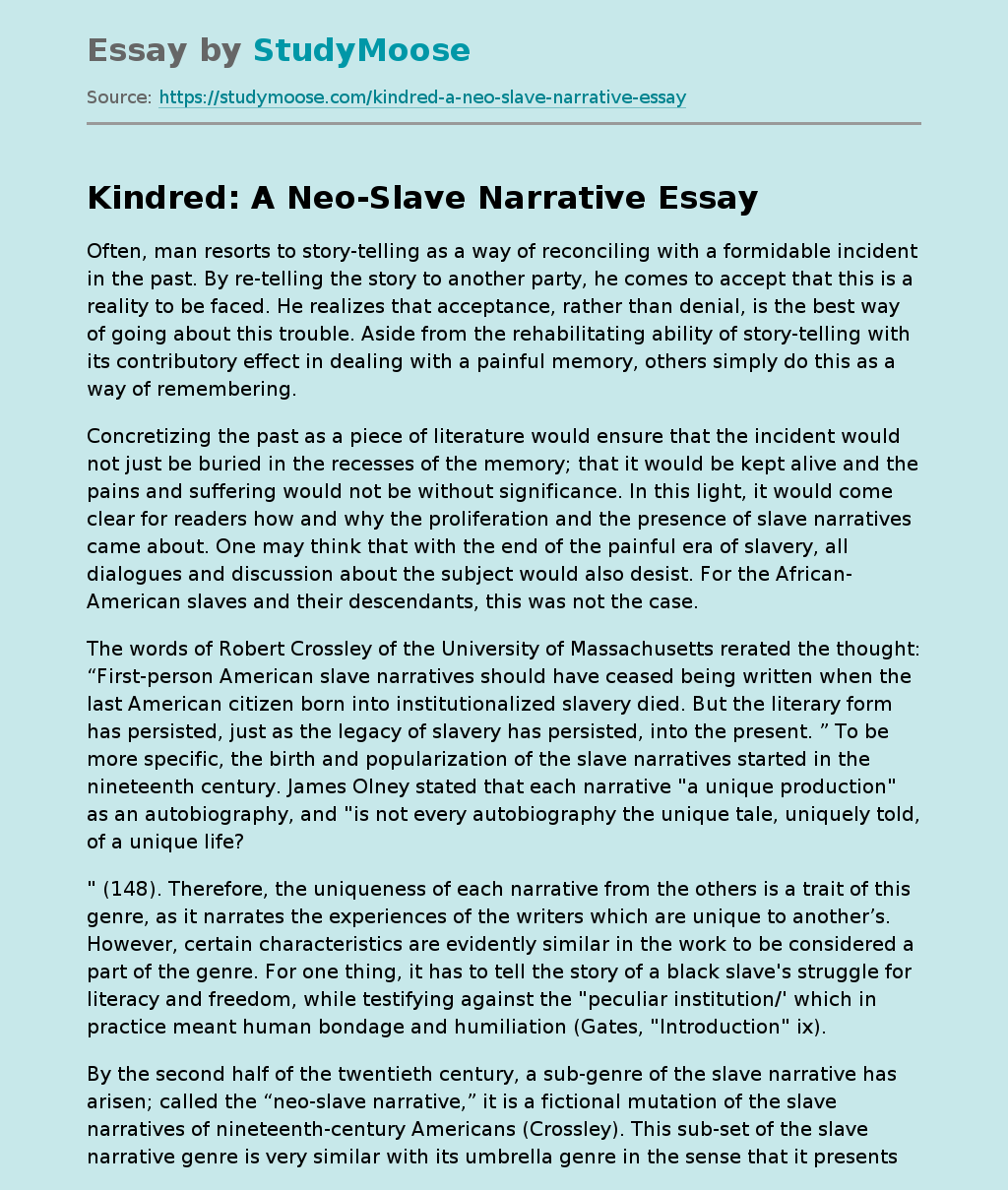