ThePerson-Centred and Psychodynamic Models of Counselling Understand the Person

Compare and contrast how the person-centred and psychodynamic models of counselling understand the person, and how these two approaches explain psychological distress experienced by individuals. (1250 words) Within society today, there is an extensive range of theoretical approaches used by Psychotherapists and counsellors. The aim of this discussion is to compare and contrast two of these approaches, the person-centred and the psychodynamic models of counselling, especially how these theories understand the individuals and psychological distress. In order to understand psychodynamic therapy, it is imperative to consider the work of Sigmund Freud and the development of Psychoanalytical theory.

Don't use plagiarized sources. Get your custom essay on
“ ThePerson-Centred and Psychodynamic Models of Counselling Understand the Person ”
Get custom paper
NEW! smart matching with writer

During all his life, Freud attempted to unravel the human mind creating methodical systems to discover answers relating to the unconscious and its impulses. He ignored conventional science and believed in free association (patients talking what comes to mind). Among many of his assumptions was the belief that all behaviour has a cause, and all repressed feelings and thoughts of early childhood are banished to the unconscious mind, therefore leading to future problems in adulthood, as the patient is usually unaware of true meaning of these past experiences.

In this type of therapy, the analyst seeks to interpret and convey a repressed feeling in a more acceptable and sensitive manner and it can also be a very long and intensive process.

It is important to acknowledge that Freud’s theories are the result of a particular historical time and culture. Furthermore it should be noted that the Psychodynamic approach is a broad perspective and has been applied successfully throughout time and has been backed up by large number of professionals and abundant literature.

Freud’s methods have been continually adapted and modified throughout time and through the work of many influential psychoanalytical professionals such as Adler (1927), Jung (1964), Klein (1926) and Erikson (1950). From their work, the Psychodynamic model of counselling was developed and its main characteristics were very similar to Freud’s psychoanalysis, such as the importance of the unconscious mind along with past experiences in shaping current behaviour. This theory also suggests that the personality is composed of three parts: the Id, consisting of the primitive sexual and hostile impulses; the ego which is the conscious mind and represents everything that is under our awareness; and the super-ego, which controls the Id and represents the moral ideas. Many professionals in the psychodynamic tradition believe that psychological distress results from inner conflicts that are not well negotiated by the defense mechanism.

In another words, the defense mechanism usually provides us with ways to ease these conflicts leading to a fulfilment of both the superego and the ID. Some individuals defence mechanism, however, fails or is dysfunctional, often leading to ill-adjusted behaviour. Moreover, the Psychodynamic model highlights the dynamics between the patient and therapist and more importantly the transference that occurs in this process, and also in the interpretations of the patient’s dream and fantasies. This approach uses counselling as a vehicle for interpretation, where the client is stimulated to talk about childhood and relationship with parents, among many other past experiences leading to the awareness of the true causes or impulses surrounding her/his actions in adult life. The process of transference above mentioned would occur when the patient converses with the therapist, projecting onto the latter feelings experienced in previous relationships, being that these feelings are significantly influenced by the patient’s unconscious mind. This process can often provide a very effective solution to assessing and treating emotional distress in individuals.

In the 1950s a more Humanistic approach developed by Carl Rogers became popular in the USA. The Person-Centred Therapy or Rogerian Approach emphasised personal growth and believed that the process of analysis should be easy to understand, warm and enthusiastic towards the individual. Contrary to the hierarchic relationship between therapist and patient encountered in psychodynamic therapy, the person-centred approach classifies both the individual and therapists as equal partners, referring to those in therapy as clients instead. This empowerment gives the clients the independency and control for improvement of their lives. Another crucial difference between the Rogerian approach and Psychodynamics is Rogers’s elimination of all interpretation around therapy. Rogers believed that despite the symptoms alighting from past experiences, it would be much more helpful for the client to focus on the present and future rather than the past. Although there are only a few established techniques in the Person-centred approach, it is important to note the emphasis is placed around the therapeutic relationship, aiming on the individuals ability to achieve a perfect understanding of the world themselves. By emphasising on this ability, the therapist would lead the client to reduce conflicts between the ideal self and present self, significantly increasing the person’s self-worth. This kind of therapy works based on encouraging the client, to focus on their ability to achieve self-knowledge rather than basing his interpretations on the client’s unconscious motives, as psychodynamic traditionalists would.

The techniques used in the Person-Centred approach involve some basic principles such as congruence (letting clients to experience themselves as they are); positive rapport (maintaining a positive attitude towards the client) and empathy (capacity to comprehend the clients’ feelings). Although both theories differ in approach, there are some similarities in beliefs that help to shape the individual’s behaviour. As well as the psychoanalyst Sigmund Freud, Rogers believed that the therapeutic relationship could lead to a better understanding of the clients’ behaviour and perhaps would also lead to a sense of improvement. In addition, both theories agree that by verbalising distress (‘the talking cure’) people would feel relieved and would then be more productive and live a more satisfying life than they would otherwise have had. To sum up, the main concept of both models is strongly based on how the individual’s conflicts and distress are addressed. While Freud focused on interpretations of what he believed were the unconscious conflicts to a patient’s suffering, Rogers believed that the therapist should encourage free expression and problem resolution in a non-directive way.

The perspective of the client/patient in each theoretical approach would differ in the way each theory describes the cause of mental illness, or mal-adjusted behaviour. Moreover, in the Person-Centred approach, the therapist operates by some basic principles such as congruence, positive rapport, and empathy towards the client while in Psychodynamics the therapy operates based on the principle of transference between patient and therapist and the interpretation of dreams and fantasies. The therapist would reveal little about himself in the psychodynamic tradition, but in the Rogerian approach, therapists would show more authenticity and reveal more of their personality. Rogerians advocate that the client would be better helped if encouraged to look at their existing problem rather than an unconscious reason or someone else’s analysis. The individual would be in the centre of therapy and would be given full control of what to talk about. Each approach has its strengths and weaknesses and one size does not fit all. People should take into account the severity, length and depth of their cases in order to achieve a psychological change and fulfil their potential.

ThePerson-Centred and Psychodynamic Models of Counselling Understand the Person. (2016, Mar 08). Retrieved from https://studymoose.com/the-person-centred-and-psychodynamic-models-of-counselling-understand-the-person-essay 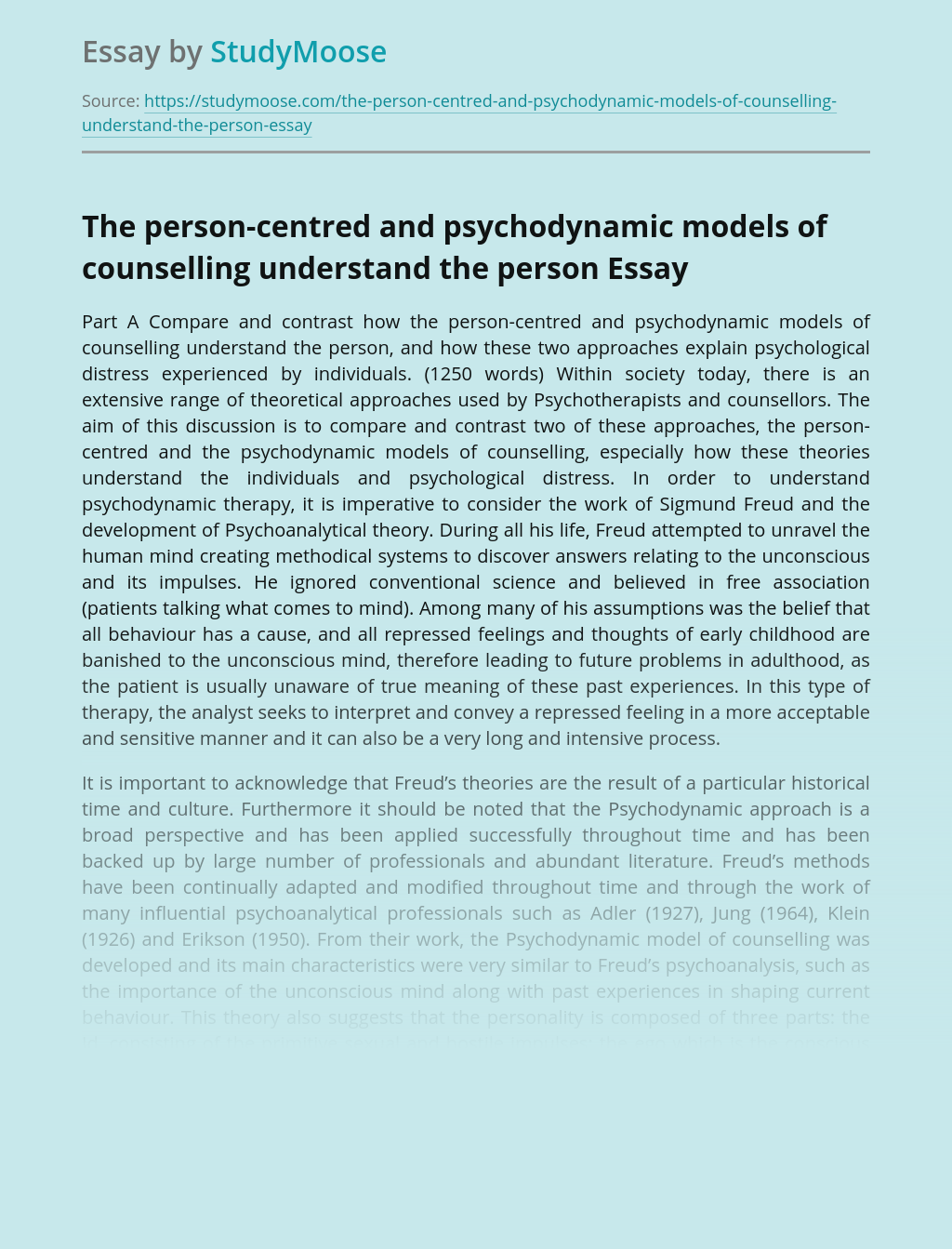