Bill of Rights; identify how these principles play out in the criminal justice system and security settings of today and finally describe freedom in relationship to personal rights and ethical standards and obligations. To begin with, Locke’s theory is one in which he felt that man should have individual freedom and rights, which for all intense purposes equates to what democracy is in modern times. He believed in the concept of individual freedoms and government, also known as liberalism.

He had a great respect for man’s moral judgment and thought that men were all “pleasant chaps”.

Locke’s’ ideals were that of a capitalist mentality, and exercised perfect freedom in relation to fulfilling financial interests. He believed in an orderly society in which we should leave the state of affairs in every man’s hands within that orderly society. And last but certainly not least, he believed in separation of powers and in the system of checks and balances. How is liberalism in the criminal justice system today? We are very fortunate to live in a time where we can exercise our own individual thoughts.

As I Iook at the criminal justice system of today, I believe that our right to have freedom of speech goes a long way in helping to make decisions based on who we should follow and what we feel is right and wrong. In order to see the major differences of the social contract theories, we must take a look at the major theories as a whole. Well to begin with, Hobbes believed in the absolute power of kings. He also believed in the “state of nature” which said that all individuals were naturally equal. He thought that they should do whatever they needed to do to survive.

As a result, everyone suffered from continued fear and danger of violent death; and the life of man was solidary; poor; nasty; poor; brutish, and short. He believed that the government was a leviathan that would swallow up the people. His government was headed by the king and that king was better than a group. He warned against the church meddling in the king’s affairs and felt that the king was more powerful than God. He felt that the people should obey the king or choose to die. The other schools of thought came from what are called the enlightenment group which is comprised of Locke, Rousseau, and Montesquieu.

They wanted to improve human conditions on earth. They generally valued natural rights as well as reason, religious tolerance, and science. We’ll begin with Locke. Locke agreed with Hobbs about the state of brutality and the natural law, but disagreed with other points. First, he felt that man by nature was a social animal. He believed that the natural right of an individual could never be taken away or even voluntarily given away. In the state of nature, men mostly kept their promises and honored their obligations, and though insecure, they were mostly peaceful, good, and pleasant.

According to Locke, the natural rights of individuals limited the power of the king thus he did not have absolute power as Hobbes said, but acted only to enforce and protect the natural rights of the people. Although Locke spoke out for freedom of thought, speech and religion, he believed property to be the most important natural right. Rousseau felt that man was essentially good – “a noble savage” in the state of nature. This goes back to when there were mainly animals roaming around and the condition of man was uncivilized. Once societal standards came along, he felt that man became unhappy because society was artificial and corrupt.

He felt that furthering society would be the cause of more unhappiness. He believed that the advancement of the arts and sciences did not benefit mankind. On the other hand, progress of knowledge made government more powerful and crushed individual liberty. He felt that the material progress had actually undermined the possibility of sincere friendship, replacing it with jealousy, fear and suspicion. He felt that we could secure freedom regardless of the will of the majority. In some respects he agreed with Locke, but he also felt that the community should be in charge.

He further believed that all people were not equal and he approved of slavery. He felt that women were the weaker sex and should obey their husbands but also felt that women had the ability to function in government feeling that they had a calm gentleness that were helpful qualities in the decision making processes in government. Thomas Hobbes (1651), John Locke (1689), and Jean-Jacques Rousseau (1762) are the most famous social contract thinkers. Each drew quite different conclusions about the nature of political authority.

Hobbes advocated absolute monarchy, Locke advocated natural rights, and Rousseau advocated collective sovereignty in the name of the general will. The Lockean concept of the social contract was invoked in the United States Declaration of Independence, which clearly states, “We hold these truths to be self-evident, that all men are created equal, that they are endowed by their Creator with certain inalienable Rights, that among these are Life, Liberty and the pursuit of Happiness, – That to secure these rights, Governments are instituted among Men, deriving their just powers from the consent of the Governed….

“,. The key principles associated with Locke’s theory are that in their natural state humans are drawn to doing good over evil; that they naturally know right from wrong, and that naturally humans prefer peace over chaos. His views are justly stated as (1) that all men are created equal; (2) that our rights are given divinely by our creator; (3) that government exists to secure and protect those rights, and (4) government exists by the consent of the governed, namely you and I.

These principles play out with relation to the criminal justice system and private security setting of today by attempting to maintain peace and justice over chaos, and by helping society to live in its natural state. It is also within our realm to be fair and just with our response to crimes. One such specification is that we should be swift, balanced and just in our reaction to crimes and criminal behavior.

Along these lines, it is essentially important that, for example, we decide on an appropriate punishment for the exercise of a capital punishment such as murder and rape. Locke set forth the view that the state exists to preserve the natural rights of its citizens. When governments fail in that task, citizens have the right and sometimes the duty to withdraw their support and even to rebel. Locke’s social contract theory inculcated in The U. S.

Bill of Rights by his argument that governments, by virtue of the ‘social contract,’ are responsible for protecting the natural rights (life, liberty, and ownership of property) of citizens and he was in favor of participation of the people in government affairs, and their input is clearly embedded in the Declaration of Independence of 1776. We know that the Bill of Rights stipulated freedom of speech and prohibited cruel and unusual punishment. And finally freedom in relationship to personal rights and ethical standards and obligations has to do with our long list of personal freedoms and the ability to carry them out. 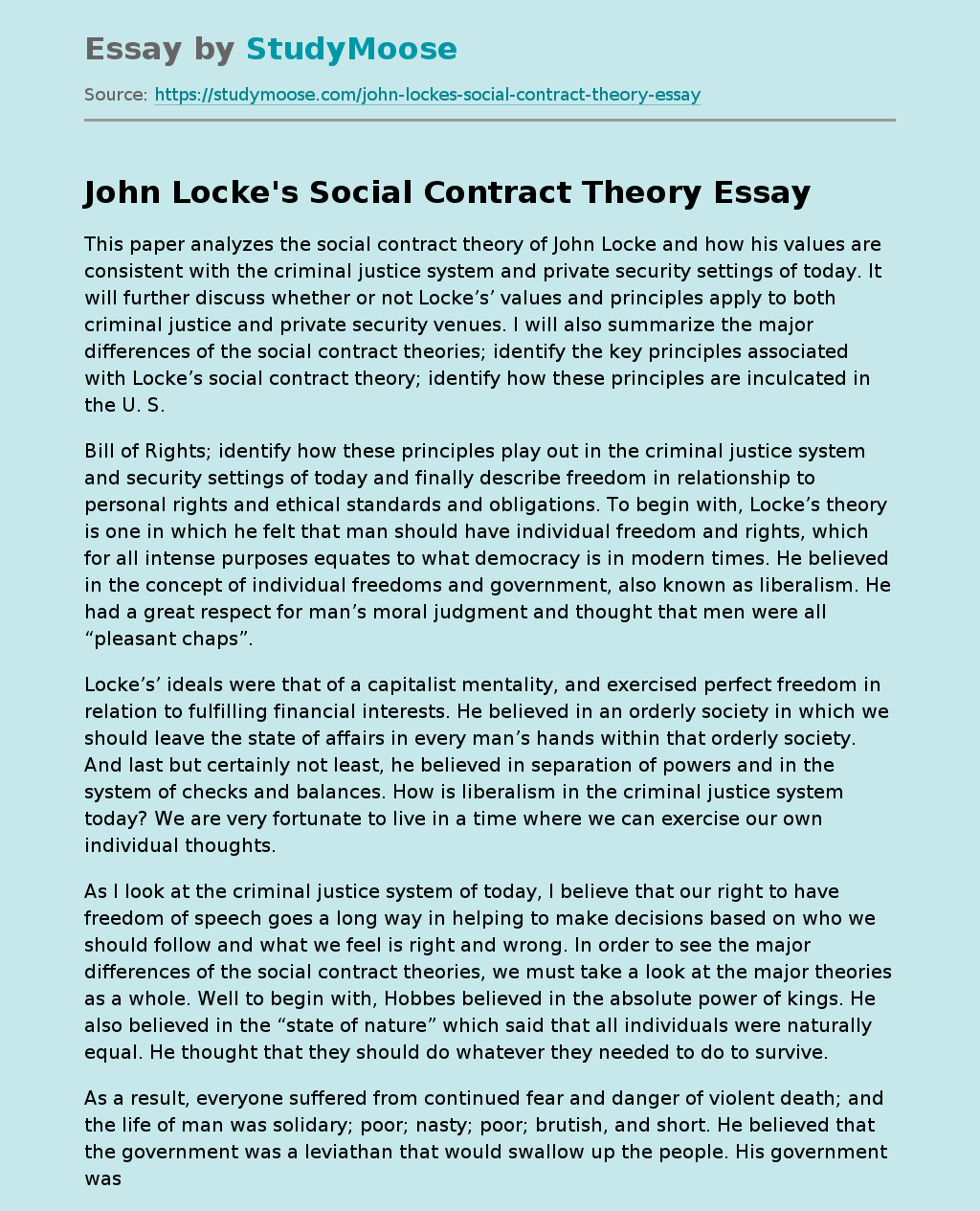