The Social Learning Theory of Bandura

The Social Learning Theory of Bandura emphasises the importance of observing and modelling the behaviours, attitudes and emotional reactions of others. The Social Learning Theory explains human behaviour in terms of continuous reciprocal interaction between cognitive, behavioural, an environmental influences, suggesting that behaviour can be learned at the cognitive level through observing other people’s actions. (Blackburn, 1993) This suggests that people are capable of imagining themselves in similar situations, and of incurring similar outcomes. Once the behaviour is learned it may be reinforced or punished by the consequences it generates.

Don't use plagiarized sources. Get your custom essay on
“ The Social Learning Theory of Bandura ”
Get custom paper
NEW! smart matching with writer

Bandura subscribed to several of the essential concepts of the Operant Conditioning Theory: reinforcement, punishment, and motivation. (Ewen, 1980) Each of these concepts can be used to explain Paul’s initial and prolonged criminal activities.

Based on Social Learning Theory, criminal behaviour is maintained through a complex schedule of reinforcement and punishment throughout the life of the individual. The reinforcement for criminal behaviour comes from both internal and external sources. Reinforcement can be in the form of tangible rewards stemming from the criminal activity itself such as an outlay of money, or from a social perspective like an increase in peer status.

Due to Paul’s dysfunctional childhood and strong negative influences in his life he found himself tempted by criminal activities in his early teens. He was sent to a boy’s home when he was fourteen for stealing, and has been in and out of juvenile and adult institutions ever since. In relation to the Social Learning Theory, Paul was motivated by direct external reinforcement, by the tangible and social status rewards.

Due to his upbringing and lack of parental discipline these Paul thought these rewards easily outweighed the consequences of this criminal actions.

The time Paul served in juvenile institutions did not discourage him from criminal activities, instead it had the opposite effect. Contact with other people who have favourable criminal antics and perceptions leads to an individual learning similar modes of action. (Hollin, 1989) The theory does not indicate that these people are necessarily associated with crime or criminal activities; they only have to express favourable attitudes towards crime. (Hollin, 1989) However, while Paul was in juvenile institutions he did mix with other criminals which did strengthen the likelihood of him continuing in his criminal behaviour.

Bandura also believed that there was another aspect to motivation, he called it self-reinforcement. (Ewen, 1980) Self-reinforcement refers to ones’ sense of pride, or as meeting of standards in ones’ own behaviour. (Ewen, 1980) Paul’s belief that he was a criminal was reinforced while in these juvenile institutions. He was happy to be a part of this group of criminals and he continued to act criminally to some degree in order to remain a part of the group and as to maintain a sense of pride and social identity.

A study in which young children were shown adults interacting with a character called “Bobo Doll” was conducted in order to prove that observation is a primary form of learning. In one film, the adults attacked Bobo, and in another they were friendly to it. One group of children were shown one film another group shown the other.

The adults attacked Bobo in a distinctive manner, they used a hammer as a weapon in some instances and in others threw the doll in the air and shouted “Pow, Boom!”. As a result of this violent version of the film, the researchers claimed that if the children repeated such behaviour, they learnt it rather than it being acted out spontaneously.

The prevalent factor that is stressed in Bandura’s theory is that observation is the process of attention. He states that the individual notices something in the environment (retention), the individual remembers what was noticed (reproduction), the individual produces an action that is a copy of what was noticed (motivation) and the environment delivers a consequence that changes the probability the behaviour will be emitted again (reinforcement and punishment). Therefore, Paul’s learned criminal characteristics were reinforced by observing his father’s and brother’s criminal activities and the constant repetition of this behaviour enabled Paul to scaffold long lasting criminal tendencies.

Criminality is a function of individual socialisation, how individuals have been influenced by their experiences or relationships with family, peer groups, teachers, authority figures and other agents of socialisation. Therefore, Paul’s immediate family had a substantial impact on his behaviour. Paul came from a dysfunctional family environment. He did not have a male authority figure in his father and his father was often absent from the family home, serving his many prison sentences.

Moreover, when his father was home he drank heavily and was regularly violent towards his wife and the children. Paul and his siblings grew up in a family where discipline was nonexistent or grossly excessive and did not have a chance to learn what behaviour was tolerable and what was completely inappropriate. Paul learnt criminal characteristics such as violent and aggressive behaviour through observing his father and how this behaviour was reinforced and repeated by his older brothers.

Paul’s mother had limited intellectual and social resources which resulted in a poor education for her children, which later on had a substantial effect on their employment chances. Paul was born into a life of poverty, he grew up in a lower class neighbourhood with a criminal subculture or criminal way of life was common. Paul was exposed to criminal subcultures where criminal behaviour was merely a social deviance and was influenced by this was of living.

There are two main issues which Paul uses to justify his initial actions. Paul justifies his actions through higher principles; believing that stealing from a commercial factory is not wrong because they are insured. He also believes that he was also subject to legalities which increased his sentence. If he committed the same crime on a private home, instead of a commercial factory, he would have received a shorter sentence. The other is being a victim of peer pressure or social psychology. Social psychology involves the behaviour of an individual when they are within a group. One such relationship is the Conformity Effect which explains that behaviour is dictated by social bonds; Paul priding himself that he is not a ‘dog’ (he does not tell on others). Also, there is a tendency for an individual to adopt group norms even if they contradict their own values. Paul stated that he had no intention of committing the act prior to going to the local pub, but was subject to peer pressure or ‘conformity’ when he ran into old prison friends. (Study Asch, 1995)

However, there is some hope for Paul, it is possible to coach a person using the Social Learning Theory to eliminate or reduce certain behaviours. The process is lengthy and the success rate is dependant on factors that differentiate from person to person. When using the Social Learning Model the subject must progress through the modelling process. Firstly, Attention – through the observation of positive behaviours and responses that interest the individual and captures their undivided attention. Secondly, Retention – Paul must be able to remember, or store the new information.

Thirdly, Reproduction – through modelling the desired behaviour and coaching, Paul must be able to demonstrate the new skill or behaviour. The next step is Motivation – Paul must have a motivating incentive for learning or changing his behaviour; and then finally Self-regulation – which involves changing the unwanted behaviour, Paul must self observe and judge his own behaviour. (Boeree, 2003) Using this theory as a comparative model it is quite possible to coach Paul to reduce or eliminate his criminal urges, he does feel ashamed of himself for committing criminal acts and the presence of his family may be the paramount underlying motivation.

Bandura’s Social Learning Theory examines the way a person behaves is dependant on how the personal, behavioural, observational and environmental factors interact and how they affect the learning process. Paul’s characteristics have been primarily instigated through observation of his family, his peers and his social environments.

The Social Learning Theory of Bandura. (2016, Jul 24). Retrieved from http://studymoose.com/the-social-learning-theory-of-bandura-essay 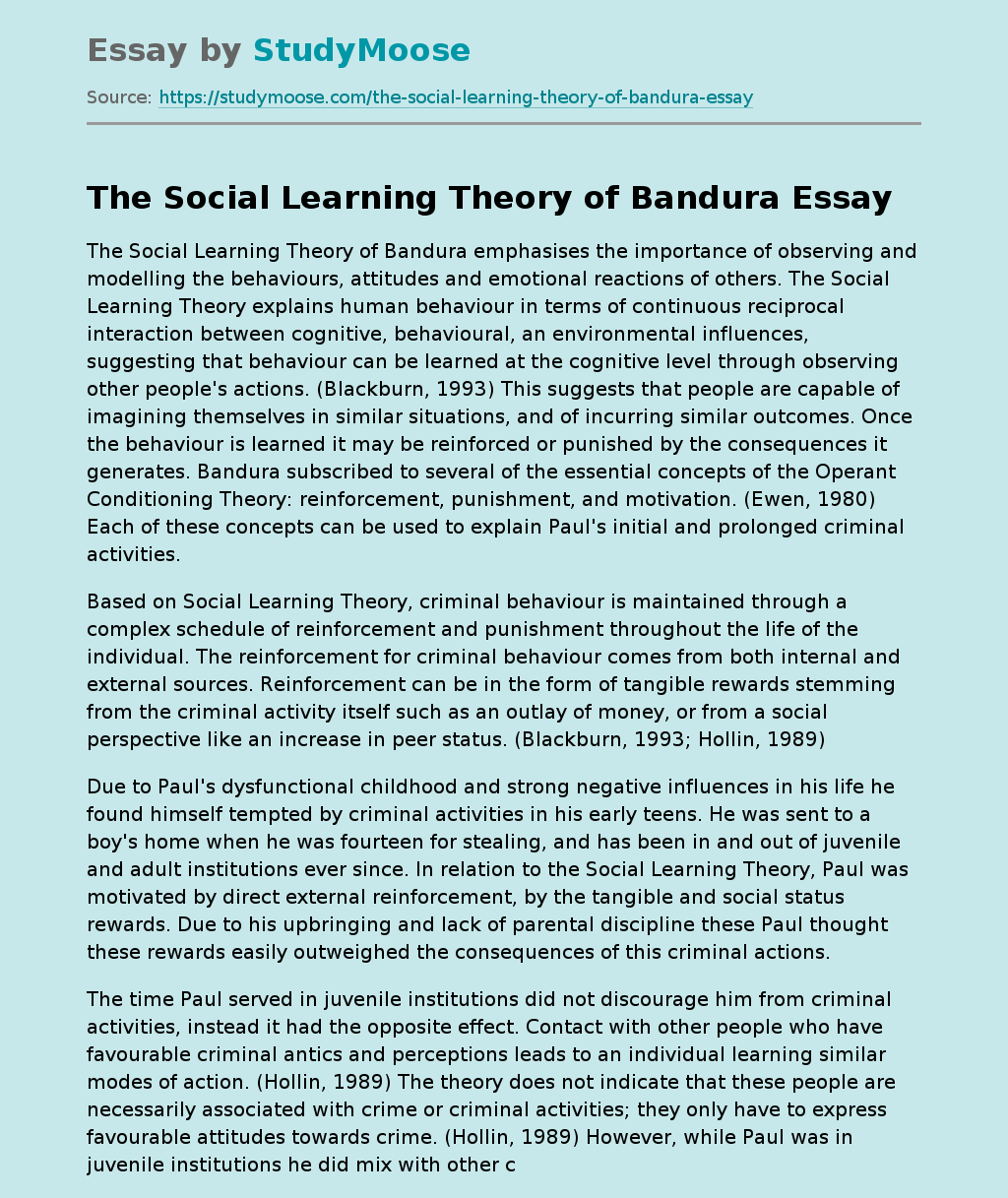