This essay will therefore discuss how far sociologists would agree that teenage criminal and deviant behaviour results from parents failing to socialise their children correctly.

Don't use plagiarized sources. Get your custom essay on
“ Discuss how far sociologists would agree that teenage criminal and deviant behaviour results from parents failing to socialise their children correctly ”
Get custom paper
NEW! smart matching with writer

According to functionalists, one of the key roles of parents is to appropriately socialise children to become good citizens of society. However, in conjunction to this, it has also been theorised that failure to appropriately socialise a child at home may lead to criminal and/or deviant behaviour later on in life. This may be that the parents them self’s display criminal and/or deviant behaviour, which that child them copy’s and learns.

Proficient in: Parents For Children

The new right approach for example theorises that children from a parentally deprived home are more likely to look for guidance and comfort elsewhere and are more prone to crime. They are therefore more likely to find role models in such situations who they aspire to grow up like. The Marxist theory of alienation however is another factor that sociologists have recognised. Marxist theorise that young, impressionable adolescences often feel pressurised by those in power who often use the law to benefit themselves and are therefore forced in to demeaning work.

Due to this, many turn to crime in order to be able to control what they do but also get certain objects that they may not have been able to receive should they have stayed on the other side of the law, objects which the rich and powerful are usually the only ones to receive. Therefore, Marxists would agree that while failure to properly socialise children is an important factor in why teenagers turn to crime and delinquency, the oppression of the bourgeois is just as far reaching. In regards to teenage behaviour, labelling is a common factor found right across the board. Whether it is in school, in peer groups, in the neighbourhood or even in the home, labelling can eventually lead to a self-fulfilling prophecy.

If a child is labelled as a delinquent early on in life, it is extremely likely that that child will eventually become to believe it they are told it enough. They will therefore begin in act as they have been labelled and become criminal and/or deviant. Many sociologist would agree that labelling is a major factor in why teenager criminally and/or deviantly. Another factor is peer pressure within a sub-culture. Sub-cultures are a common day thing in many environments, especially in school. Most of them in areas of material and capital deprivation have developed a laddish sub-culture, where you must be tough and hard in order to be popular where as those who do well in academics are often viewed as uncool and nerdy.

Therefore, many teenagers are pressured in to behaving criminally and or/deviantly by the threat of being socially outcast and labelled as uncool by their peers. Therefore, many sociologists would agree that peer pressure within a sub-culture does affect the criminal and/or deviant behaviour of teenagers today, possibly more so than poor socialisation in some situations. In this essay, I have explained four different factors that can affect how deviant and/or criminal teenagers behave in today’s society. However, although poor parenting may result in teenager criminal and deviant behaviour, other factors such as the Marxist theory of alienation, labelling and peer pressure within a sub-culture affect teenagers just as much as poor socialisation by parents.

Discuss how far sociologists would agree that teenage criminal and deviant behaviour results from parents failing to socialise their children correctly. (2016, May 21). Retrieved from https://studymoose.com/discuss-how-far-sociologists-would-agree-that-teenage-criminal-and-deviant-behaviour-results-from-parents-failing-to-socialise-their-children-correctly-essay 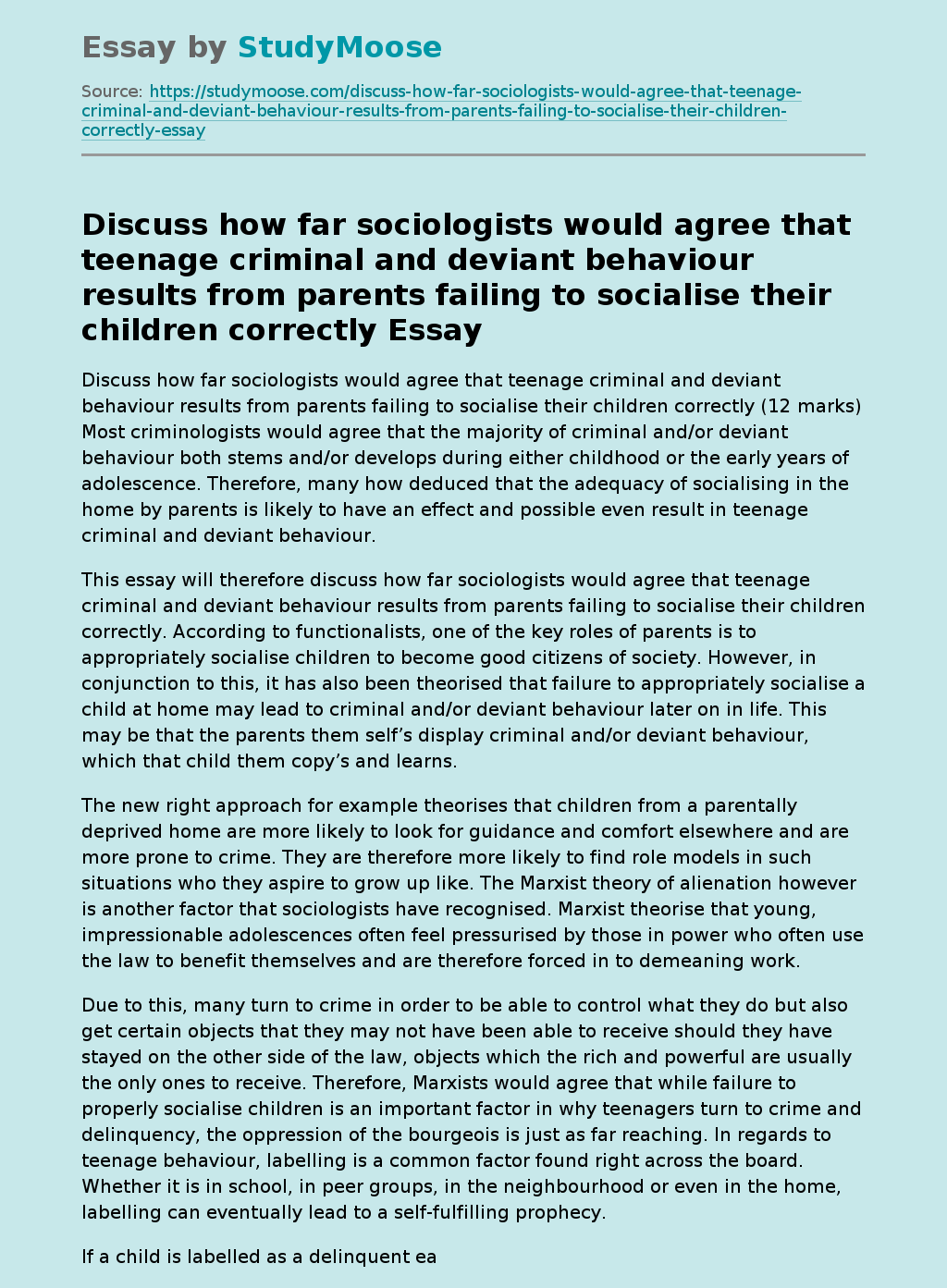