The Role of Capitalists DBQ

More often than not, America’​ s antebellum capitalists were accused of being the “​ robber barons​ ” of industrial America. The common conception is that these men took advantage of a naïve and growing economy to reap its benefits without giving anything in return. While it was true that the majority of America was poor in comparison to the few elites, the philanthropists efforts and contributions to our country and its people through the use of their wealth to improve this nation can not be denied.

They were able to created thousands of job opportunities and build industries that benefited the entire nation. If not for these men and their efforts, there would have been no one to pave the road for America’s industrial domination. They were truly the “captains of industry”. While these successful capitalists of the late 1800s might be known to some as “captains of industry”, there were more commonly referred to as “​ robber barons​ ”. This was because of the common belief that they were responsible for the farmers​ grievances (doc.

The weapon of these “​ robber barons​ ” was the trusts that they created to gear economical power and domination toward these men (doc. E). While it is true that these men did utilize trusts and methods such as horizontal and vertical integration, they were able to turn a major profit for use in improving the nation. If these men had not created such methods to harness the industry, there would have been no other alternative for America as a whole to grow.

The South had already proved that dependence on a one-crop economy was a failing gamble. They had shown that all other innovations were Stark 2 too primitive now, and the nation needed these men​ ’s wealth and power to grow as a country. The capitalists of this period had created many job opportunities during the time as well. Thousands if not millions of Americans found work thanks to Carnegie’s US Steel, Rockefeller’s Standard Oil, or working on the railroads owned by Cornelius Vanderbilt.

These jobs brought rural Americans off of their farms and immigrants onto ships to come in search of an opportunity to make something of themselves. However, many critics complained that these jobs did not pay very well. This reminded some of the medieval system of lords and serfs, as shown in “The Robber Barons of Today” (Document D). While it was true that jobs were sometimes on the end of low labor that paid poorly, the fact that people still clustered from faraway places to work at those jobs shows that they were better than what the people initially had. Even with the low wages urbanization didn’t stop and Immigration didn’t stop. The United States had to enact restrictive laws, such as the Chinese Exclusion Act of 1882, to keep people out because they still wanted to come here so badly and take the jobs of Americans that did not want to work in such conditions.

The laboring classes did argue though that work conditions were horrible; they were unsanitary, overbearing, exhausting, and the list continues (doc. F and G). While this argument may be true, it can not be denied that that was somewhat of a necessary. For if more money had been spent on salaries and the beautification of the working environment, the manufacturers would have had no wealth to redistribute for use in their philanthropist purposes. If Rockefeller had not “borrowed” from his workers, who then would have contributed to the University of Chicago​ s educational and enlightenment funds? If Andrew Carnegie had not donated his funds for the creation and Stark 3 prosperity of Carnegie University, what would have become of the University​ as well as its present day achievements?

The fact of the matter is that if it were not for these ”robber barons”​ ​ and their philanthropy, there would be less improvement of the education and improvement of America as a whole. And without some form of education, the innovations that America​ s greatest inventors created may have not ever found their way to industrial success. So while it is true that these capitalists’​ wealth widened the gap between the rich and poor, the argument that these men were more like the leaders of a growing industry is even more valid (doc A).

These Northern capitalists led the South away from sole agricultural economic dependence, but more importantly, they used their wealth for the growth of America​ s industry (doc. B). If these men did not transfer their wealth to educational development as well as the creation of thousands if not millions of American jobs, there would have been no means for industrial growth and development. if America’​ s industry could not develop, it would never have risen to the industrial excellence that allowed for America to become the powerhouse that it is today.

The Role of Capitalists DBQ. (2016, Aug 19). Retrieved from http://studymoose.com/the-role-of-capitalists-dbq-essay 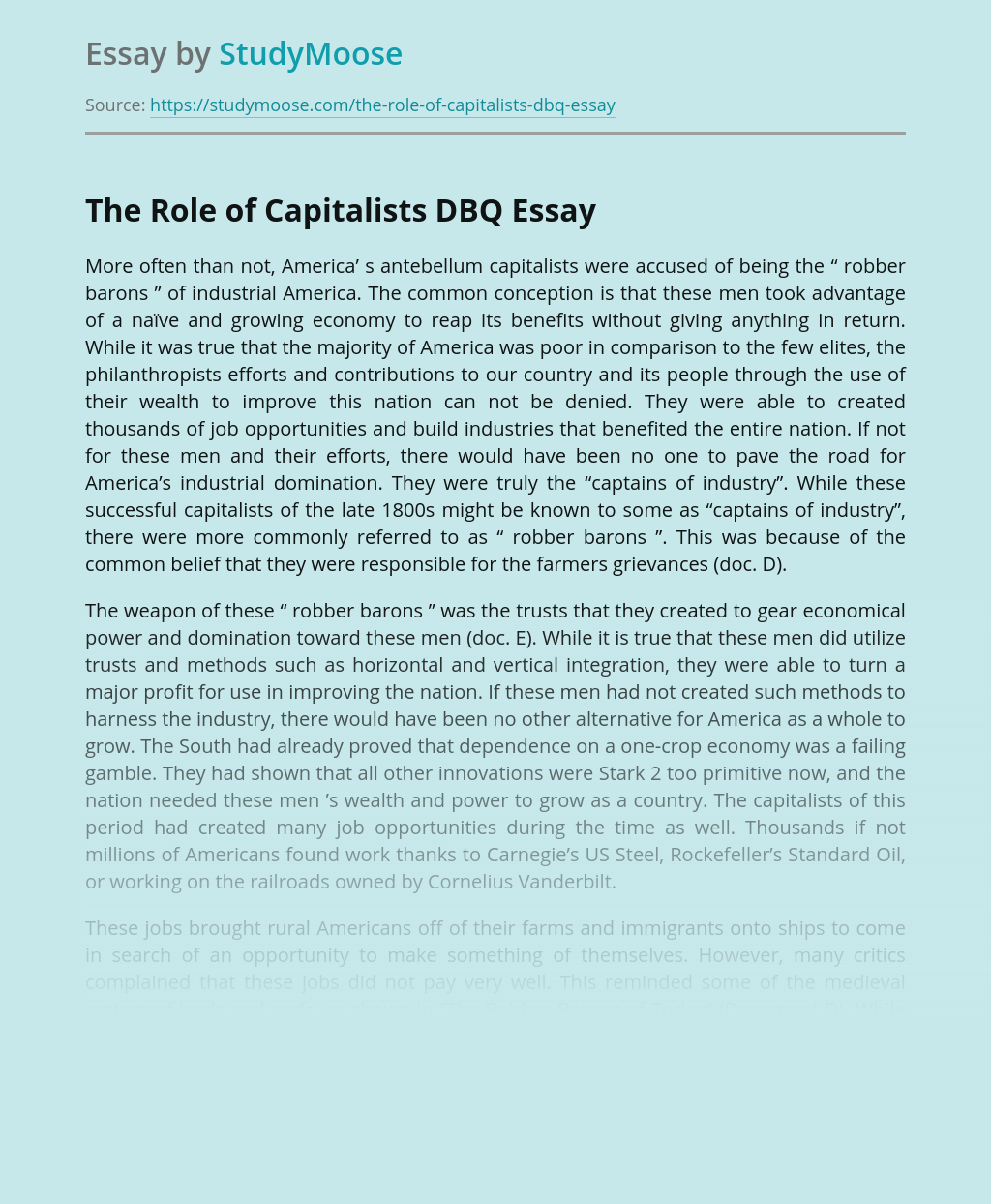 Don’t waste time
Get a verified writer to help you with The Role of Capitalists DBQ
Hire verified writer
$35.80 for a 2-page paper
Stay Safe, Stay Original