During the Antebellum period, education was not a primary focus. Education was not all that important because everything seemed to be set in stone. The children of the wealthy would get the best possible education in private schools and academies, and would learn about business. This would prepare them for their inherited future. The children of the poor on the other hand would go to public schools which taught trade and industrial skills, which would prepare them to work in jobs at factories and such.

However, educational reformers saw that in order for the country to succeed, the poor had to be taught, or democracy would not succeed.

During the antebellum period, the north was in a very good position. They were manufacturing on a large scale and urbanizing. These two characteristics are they key role in educational reform. The south however was neither urbanized nor manufacturing. The south, which at the time was still heavily into slavery, could not be educationally reformed as well as the north because slavery was contradicting with the reform process.

There were many reform struggles in the south, all due to slavery. The north was reforming nicely, with new schools being built, the wealthy paying higher taxes in order to educate the poor and such.

The antebellum period gave birth too many education advocators. They fought for different people, but they shared one purpose, to provide education. For example, the most renowned education reformer was Horace Mann. As secretary of the Massachusetts Board of Education, Mann fought for higher teacher qualifications, better pay, newer school buildings, and better curriculum.

He believed that education was a child’s “natural right,” and that moral education should be the heart of the curriculum. Mann was firmly convinced that public education had the power to become a stabilizing as well as an equalizing force in American society.

Educational reform during the antebellum period was not only an effort to get better education for the poor white men, but also the women and African Americans. Women took this as their chance to try and gain some rights and become equal with men, in education. They fought for their right to get the same education opportunities as men. The women who did faced yet another obstacle. For example, the women who got into the colleges were given rigorous and challenging schedules. This was an effort to undermine their confidence, and keep them from graduating college. The women however didn’t falter, and did very well. African Americans also used this as an opportunity to get educated. However, only free African Americans had a chance, because it was forbidden for slaves to receive education. This reform and slight education gave the African Americans hope and some light in their future.

The educational reform during the antebellum period was very significant. It educated the poor, because the wealthy knew what needed to be done. Since working men were allowed to vote, and the majority of men were in the low middle classes, their vote made a big difference. Since most of them were uneducated, they would be ignorant and dangerous when it came time to elections. Education reformers knew that the poor needed to be educated in order for democracy to succeed. 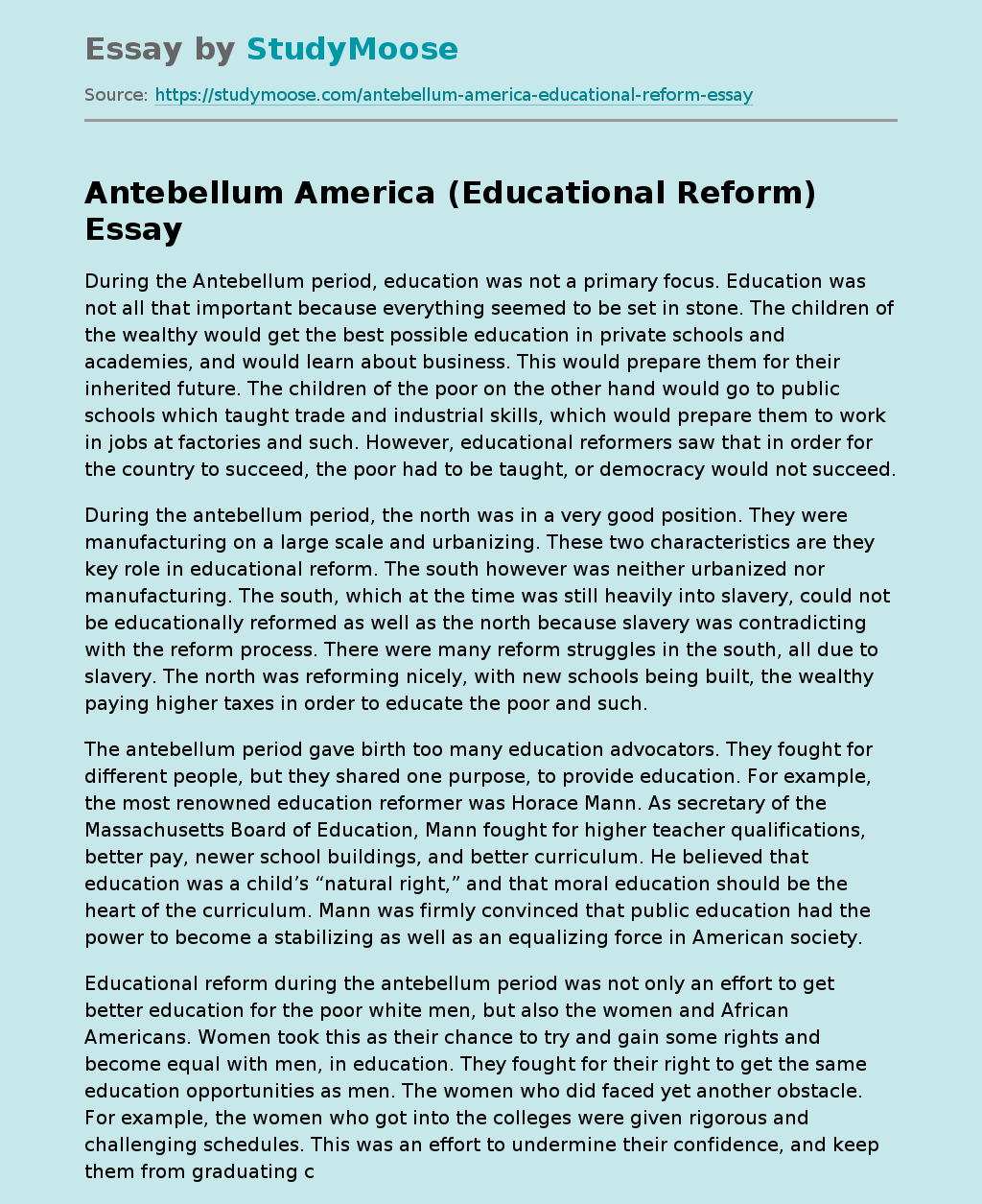