Peter the Great and his reforms: DBQ type essay

As the tsar of Russia, Peter the Great enforced many social reforms. He was very influenced by Western European ideas and incorporated many of them into Russian society. Throughout their history, Russian males wore long beards. After viewing European styles, Peter declared that all men, except peasants and priests were to cut off their beards and if they refused, they were to pay one hundred rubles a year.

Don't use plagiarized sources. Get your custom essay on
“ Peter the Great and his reforms: DBQ type essay ”
Get custom paper
NEW! smart matching with writer

Peter also passed a reform of proper attire for Russians. Nobles originally wore long garments that had touched the floor but Peter abolished this and ordered them to be influenced by French style fashion and accessorize their clothing with gold or silver jewelry.

The rest of the men were told of the new fashions and were expected to follow these styles.

Women also had a change in appropriate appearance. The new chosen way of dress was very similar to the English. Jean Rousset de Missy writes in the Life of Peter the Great, “The dress of women was changed, too. English hairdressing was substituted for the caps and bonnets hitherto worn; bodices, stays, and skirts, for the former undergarments….” (Document 2) Peter also took the European idea of women choosing who they wish to marry rather than their parents assign their husbands for them.

These social changes were some of the many that began to modernize Russia.

Peter the Great is credited with greatly improving Russia’s military. He established the first Russian navy in 1696. Before his rule, the Russian Army was very limited. He rearranged and enlarged the Russian army similar to that of European models. According to document 3, Russian Peter the Great and the Russian Empire, “Under Peter, the army drafted soldiers for lifetime terms from the taxpaying population, ands it drew officers from the nobility and required them to give lifelong service in either military or civilian administration.”(Document 3) He established the first Russian navy in 1696. This navy brought in many foreign exporters. By the year of his death, the navy had 48 ships and 800 galleys. Peter the Great felt very strongly about the Russian military and was very devoted to it. Paul Milikov describes Peter’s dedication, “In all of Peter’s activity we find nothing more deeply rooted, almost to the point of instinct, no other guiding idea other than this idea of service… the feeling of duty, without a doubt, helped Peter amidst all the fluctuations and vicissitudes of fortune, amidst his own impulses and caprices- to hold his will steady, to outlast his enemies, his allies, his helpers and his nation in the quest to attain the goals he had set.” (Document 4)

Most of the rule of Peter was consumed with war. He attempted to gain allies and capture ports. It is said that, ” Throughout his victories, Peter acquired a direct link with Western Europe. In celebration, Peter assumed the title of emperor as well as tsar, and Muscovy officially became the Russian Empire in 1721.” (Document 7)Throughout his rule of Russia in the 18th century, Peter the Great made many economic reforms. During his rule, he greatly tried to modernize the country. Before his reign, most people were assigned to a job based on blood lines. “In 1722, Peter introduced the Table of Ranks, which determined a person’s position and status according to service to the tsar rather than to birth or seniority. Even commoners who achieved a certain level on the table were ennobled automatically.” (Document 3)

Peter also allowed for the state treasury to increase revenue with taxation. He also increased education for the people of Russia. He built many new schools throughout the country. The style of this education was one based on Western Europe. Peter was also concerned with trade and commerce, in his will it reads, “Seek the alliance with England, on account of our commerce, as being the country most useful for the development of our navy (merchants) and for the exchange of our produce against her gold; keep up continued communications with her merchants and sailors, so that our s many acquire experience in commerce and navigation. ” (Document 7) Peter is also credited with reorganizing the government structure. This reorganization allowed the local government to maintain order and collect taxes.

After becoming tsar of Russia in 1682, Peter the Great established many types of reforms in Russia. These reforms proved to be positive in modernizing the 18th century Russia. Peter the Great’s rule of the country seemed to be one of the most influential.

Peter the Great and his reforms: DBQ type essay. (2016, Jul 20). Retrieved from https://studymoose.com/peter-the-great-and-his-reforms-dbq-type-essay 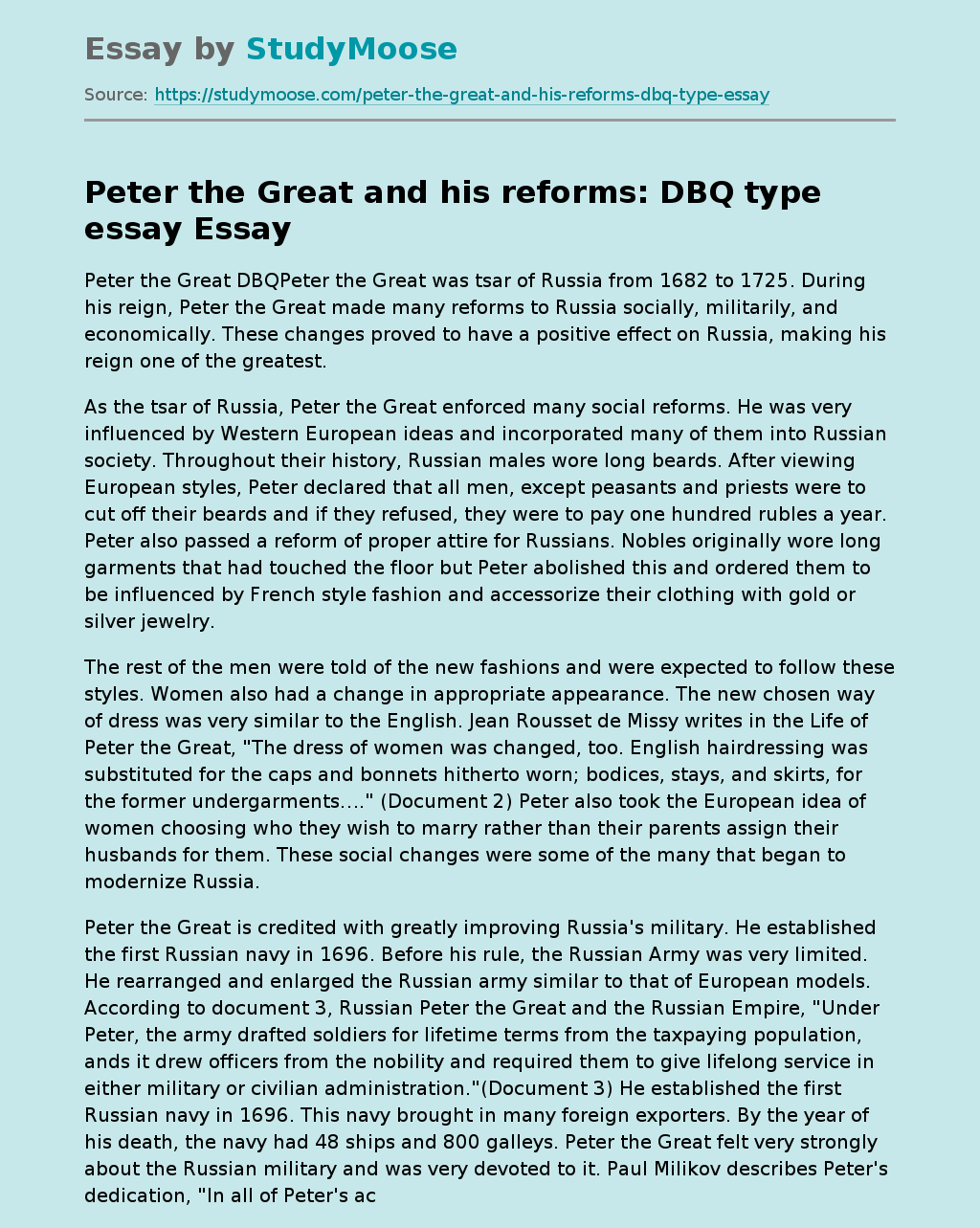