Educational reforms are a significant reference point in the educational history of Pakistan in terms of their scale, the amount of money invested in them, the order of their urgency and their official/political ownership.

The reforms are also important as their need was felt by the donor country (the US), and the contours of the implementation process were drawn up by consultants who came as part of the grant package.

Before we look at the politics of these educational reforms we need to understand that historically dominant groups have always used terms like ‘reforms’, ‘development’, ‘civilisation’, ‘emancipation’, and ‘peace’ for their hegemonic purpose.

Don't use plagiarized sources. Get your custom essay on
“ Educational Reforms in Pakistan ”
Get custom paper
NEW! smart matching with writer

Many imperialist powers annexed other countries ostensibly to civilise them, to develop them, to liberate their people, and to bring peace to the colonies.

The important point to note here is that hegemonic powers first turn development into ‘undevelopment’ and then offer reforms for their own version of development.

For instance, when the British came to India the country was doing fine economically.

Michael Parenti in Against Empire writes, “In 1810, India was exporting more textiles to England than England was exporting to India. By 1830, the trade flow was reversed. The British had put up prohibitive tariff barriers to shut out Indian finished goods and were dumping their commodities in India, a practice backed by British gunboats and military force. Within a matter of years, the great textile centres of Dacca and Madras were turned into ghost towns.”

This view of development is purely physical. This interesting pattern is also shared by military governments. It is claimed that most developmental works were carried out by military dictators like Ayub, Zia, and Musharraf.

We can also equate this pattern with ‘form’, ‘deform’, and ‘reform’. Military governments first dissolve parliament and then, after ruling for a long time, promise to give back democracy (their own version of it) as a token of favour. In other words, the dominant group first deforms the existing practice and then embarks on reforming the process.

Let us now look at the rationale of the post-9/11 reforms. Ironically the need for such reforms was not felt by the local government but by the US. In the 9/11 Commission report, the US is urged to “support Pakistan’s government in its struggle against extremists with a comprehensive effort that extends from military aid to support for better education, so long as Pakistan’s leaders remain willing to make difficult choices of their own.”

Following this commitment, a large sum of money was given to Pakistan for educational reforms. According to USAID, “From 2002 through 2006, USAID provided a total of $449m to address the most pressing needs: education, health, economic growth, and good governance.” One of the major reforms was to purge the curriculum of hate material. It is important to note that most of this hate material was in fact included during the period of the Afghan war.

Besides help in the shape of weapons, money, training etc, a large sum of money was also allocated by the superpower for designing such primers and books that would excite the youth for jihad. This jihad was a political need of the superpower to settle scores with the Soviet Union. For this purpose a centre was established in Peshawar to design such books. Tariq Ali (quoted in Mamdani) referred to primers that stated that the Urdu letter tay stood for tope (cannon), kaff for Kalashnikov, khay for khoon (blood) and jeem for jihad.

It is interesting that money is now being squandered on taking out the hate material which was once inserted with consent. This should not come as a surprise as education has always been used by hegemonic forces as a potent tool to realise their vested interests by moulding marginalised groups. Having looked at the upper level of politics in educational reforms now let us see political manoeuvring at the national level.

Pakistan has always suffered from the problem of poor allocation of funds for education. Here was a very good opportunity to make appropriate use of money to bring a qualitative change to the educational system of Pakistan. But on the contrary, the government used this money for its own image-building. To do wonders, a retired general was appointed as minister for education. At the local level, slogans of self-praise, such as ‘Parah Likha Punjab’ were coined to create the illusion of development.

On the top, political appointments were made, some of them quite controversial. A sizeable amount of funds was allocated to print and electronic advertisements for the image-building of the provincial leadership. In the books published by the Punjab Text Board a message from the chief minister was also inserted.

A typical practice in most research projects, initiated in the name of educational reforms, was to focus on the enhancement of numbers. Showing increased numbers at the end of a research project would satisfy the donors, and the salaries of the employees and consultants would be justified. What do we find as a result of such lucrative projects? We should expect a typical number-crunching game without any sustainable qualitative change.

It is important to realise that for real improvement in education, money is important. But money alone cannot bring about any meaningful change unless the desire for reform comes from within, appointments are made on the basis of pure merit, planning is done carefully, an effective monitoring system is in place and goals are not limited to demonstrating expansion in numbers. 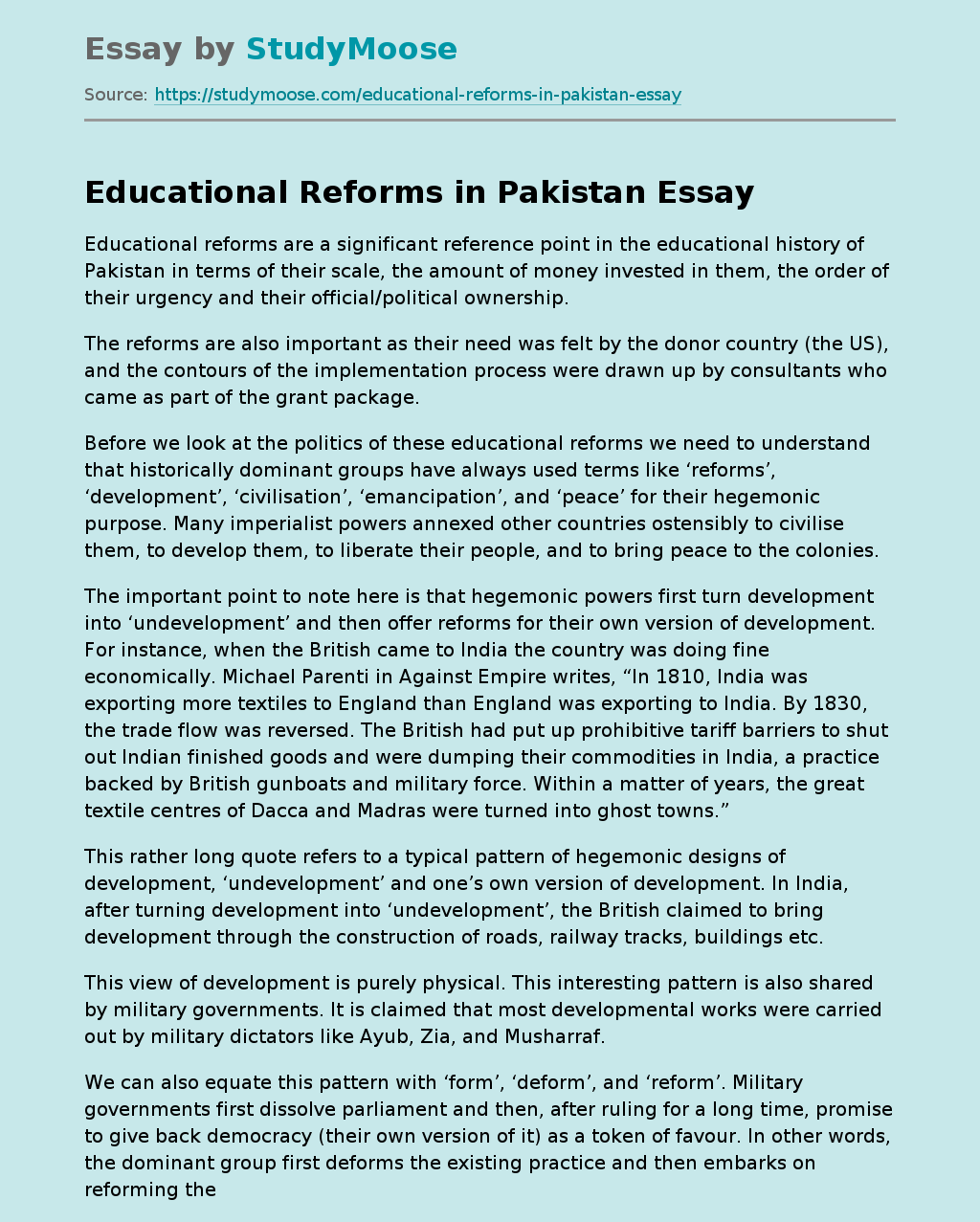