In this essay I will discuss all the situational factors that formed the basis of the reforms during the era of education reform from 1976-1994 in South Africa. The essay will critically discuss factors in detail regarding pre 1994 education. I will then give a conclusion on all the factors that influenced the educational reforms. The Soweto uprising in 1979 In 1979 there was a huge riot against the education act. The riot was about creating equal learning opportunities for everybody, black and coloured people rioted in the streets of Johannesburg because they were tired of being oppressed.

Don't use plagiarized sources.
Get Your Custom Essay on Soweto uprising Just from $13,9/Page

Thus putting education for people of “colour” in a deep crisis. Students were upset with three major issues: the standard of education, the quality of teaching and finally the poor state of school buildings and equipment.

The 1994 democratic elections In 1994 the first democratic elections took place, this is the first time that everybody was seen as equal, with equal rights and learning opportunities. People were also given the freedom to pick which languages they wanted to learn in, as well as have a choice on subjects they learnt. People were also given freedom of choice in other areas not only education and some of these choices are: freedom to vote, freedom to live where they want, freedom to marry between races and International sanctions, against South Africa, in sport and economics were lifted.

Differences in schooling between the four different race groups Along almost any dimension of comparison, there have been, and are glaring inequalities between the four schooling systems in South Africa. This applies to teacher qualifications, teacher-pupil ratios, per capita funding, buildings, equipment, facilities, books, stationery and also to ‘results’ measured in terms of the proportions and levels of certificates awarded. Along these dimensions, “White’ schools are far better off than any of the others, and ‘Indian’ and ‘Coloured’ schools are better off than those for ‘Africans’.

Schooling is compulsory for ‘Whites’, ‘Indians’ and ‘Coloureds’ but not for ‘Africans’. Which created unequal opportunities when it came to job opportunities. Curriculum during the apartheid era Curriculum development in South African education during the period of apartheid was controlled tightly from the centre. While theoretically, at least, each separate department had its own curriculum development and protocols, in reality curriculum formation in South Africa was dominated by committees attached to the white House of Assembly.

So prescriptive was this system, controlled on the one hand by a network of inspectors and subject advisors and on the other hand by several generations of poorly qualified teachers, that had authority, controlled learning, and corporal punishment were the rule. These conditions were exacerbated in the impoverished environments of schools for children of colour. Examination criteria and procedures were instrumental in promoting the political perspectives of those in power and allowed teachers very little latitude to determine standards or to interpret the work of their students. The Bantu education act.

The Bantu Education Act (No. 47) of 1953 widened the gaps in educational opportunities for different racial groups. The concept of racial “purity,” in particular, provided a rationalization for keeping black education inferior. Verwoerd, then minister of native affairs, said black Africans “should be educated for their opportunities in life,” and that there was no place for them “above the level of certain forms of labour. ” The government also tightened its control over religious high schools by eliminating almost all financial aid, forcing many churches to sell their schools to the government or close them entirely.

Christian national education(C. N. E) Christian National Education supported the NP program of apartheid by calling on educators to reinforce cultural diversity and to rely on “mother-tongue” instruction in the first years of primary school. This philosophy also exposed the idea that a person’s social responsibilities and political opportunities are defined by that person’s ethnic identity. The government also gave strong management control to the school boards, who were elected by the parents in each district.

Official attitudes toward African education were paternalistic, based on segregation. Black education was not supposed to drain government resources away from white education. The number of schools for blacks increased during the 1960s, but their curriculum was designed to prepare children for menial jobs. Per-capita government spending on black education slipped to one-tenth of spending on whites in the 1970s. Black schools had inferior facilities, teachers, and textbooks. Conclusion In conclusion to the above essay there were many problems such as;

Christian national education(C.N. E), The Bantu education act, Curriculum during the apartheid era, Differences in schooling between the four different race groups, The 1994 democratic elections, The De Lange commission, Erosion of the culture of learning and teaching (C. O. L. T)and The Soweto uprising in 1979. In all these situational factors that formed the basis of the reforms during the era of education reform from 1976-1994 in South Africa, the 1994 democratic elections were put in place so that everyone had equal opportunity at everything; it was the main “turn around” point after the period of 1976-1994.

I have discussed some of them in detail so that you can get a better understanding of the reforms that took place during the period of 1976-1994. Words: 1024 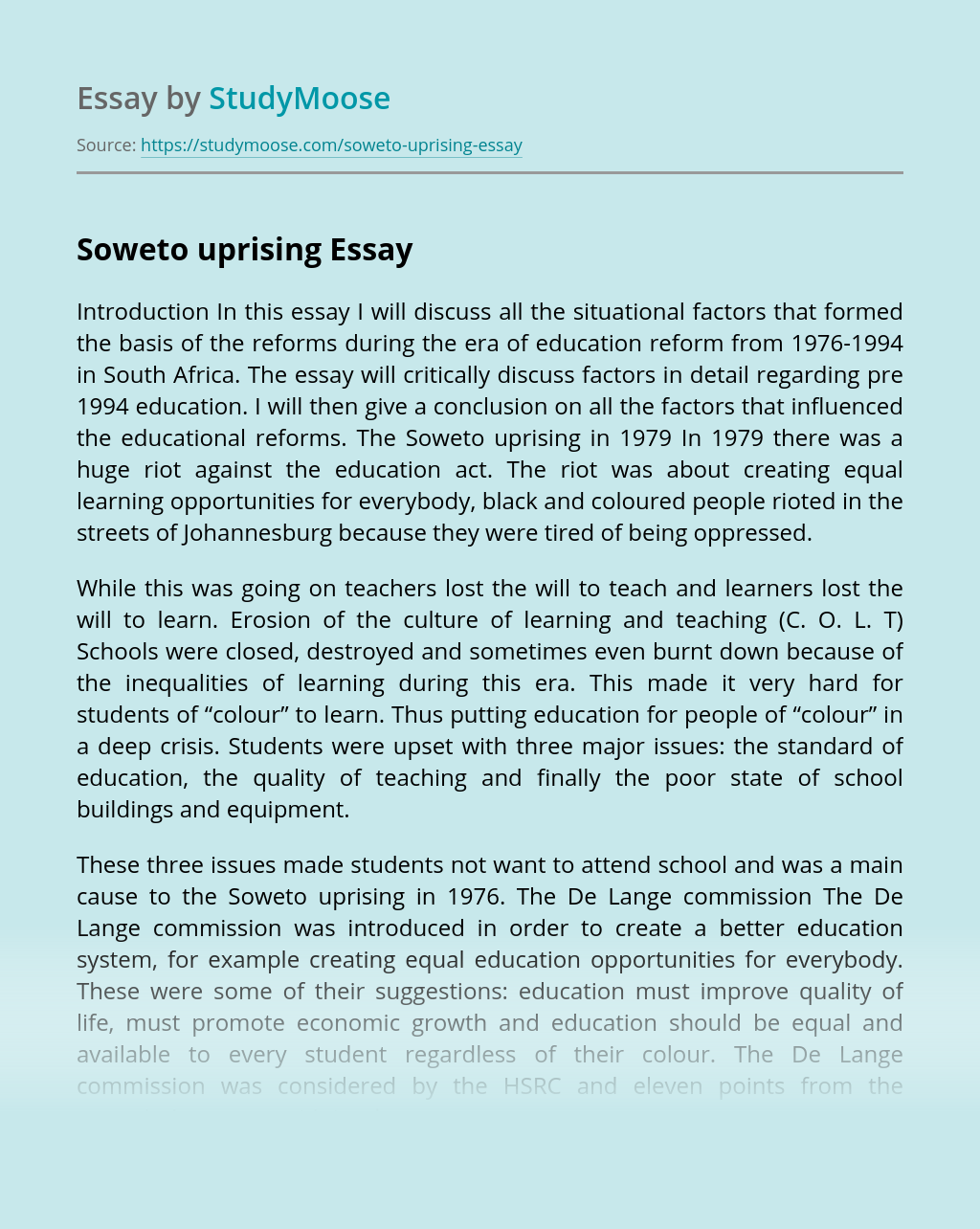 Rate this post Abstract School kills creativity – Ken Robinson In his speech at the TED conference in February 2006, Sir Ken Robinson explains his idea that education is an important and essential part of everyone’s life for the progression and prosperity of a better life for the individual and a better world for humankind....

Rate this post Paraphrasing and summarizing are very similar. Both involve taking ideas, words or phrases from a source and crafting them into new sentences within your writing. In addition, summarizing includes condensing the source material into just a few lines. Whether paraphrasing or summarizing, credit is always given to the author. Below is a...

Get Essay
Why Computers Should Be Used in K -12 Schools

Rate this post As described in the definition by the Oxford Dictionary a computer is an electronic device which is capable of receiving information (data) in a particular form and of performing a sequence of operations in accordance with a predetermined but variable set of procedural instructions (program) to produce a result in the form...

Understand ways to maintain a safe and supportive learning environment

Being a teen to being a toddler

Rate this post When Apple announced it’s new OS back in March, many people were very excited at a change to the old IOS 6. As beta testing for the OS began and bugs began to intoxicate the new OS many consumers were left wondering if the need to switch at the final release was...