Cry Freedom was a movie that took place in South Africa in the 1970’s. It is a movie about a journalist, Donald Woods, and a black activist, Steve Biko. While Woods was around Biko reporting what was happening, Biko invited Woods to go see one of the impoverished black township so he could see where black people in South Africa lived. When they arrived, Woods was shocked. The black people of South Africa were living in terribly poor conditions due to the government imposed restrictions on their lives.

Don't use plagiarized sources.
Get Your Custom Essay on Cry Freedom Just from $13,9/Page

Woods realizes how wrong the government is by putting these restrictions in place and begins to agree with Biko and his beliefs.

Biko was a very outspoken activist for the rights of the black people in South Africa. The government had already banned him from leaving King William’s Town, his hometown, due to his past efforts for the cause. Latter on in the movie, Biko ends up getting arrested after a political speech which is outside of the area in which Biko is supposed to stay banned to.

After being arrested, Biko is beaten to death. Since Woods had been reporting on the story, him and Biko had become good friends. After the death of his friend, Woods decided to work to expose the government’s part in the beating of Biko. After meeting with the South African Minister of Justice, Woods is banned by the government just as Biko was when the movie began. After being banned, Woods and his family are targeted and harassed by the government. Woods manages to escape the country of Lesotho disguised as a priest and the rest of his family joins him latter on. Woods escapes to Botswana with the help of an Australian journalist. 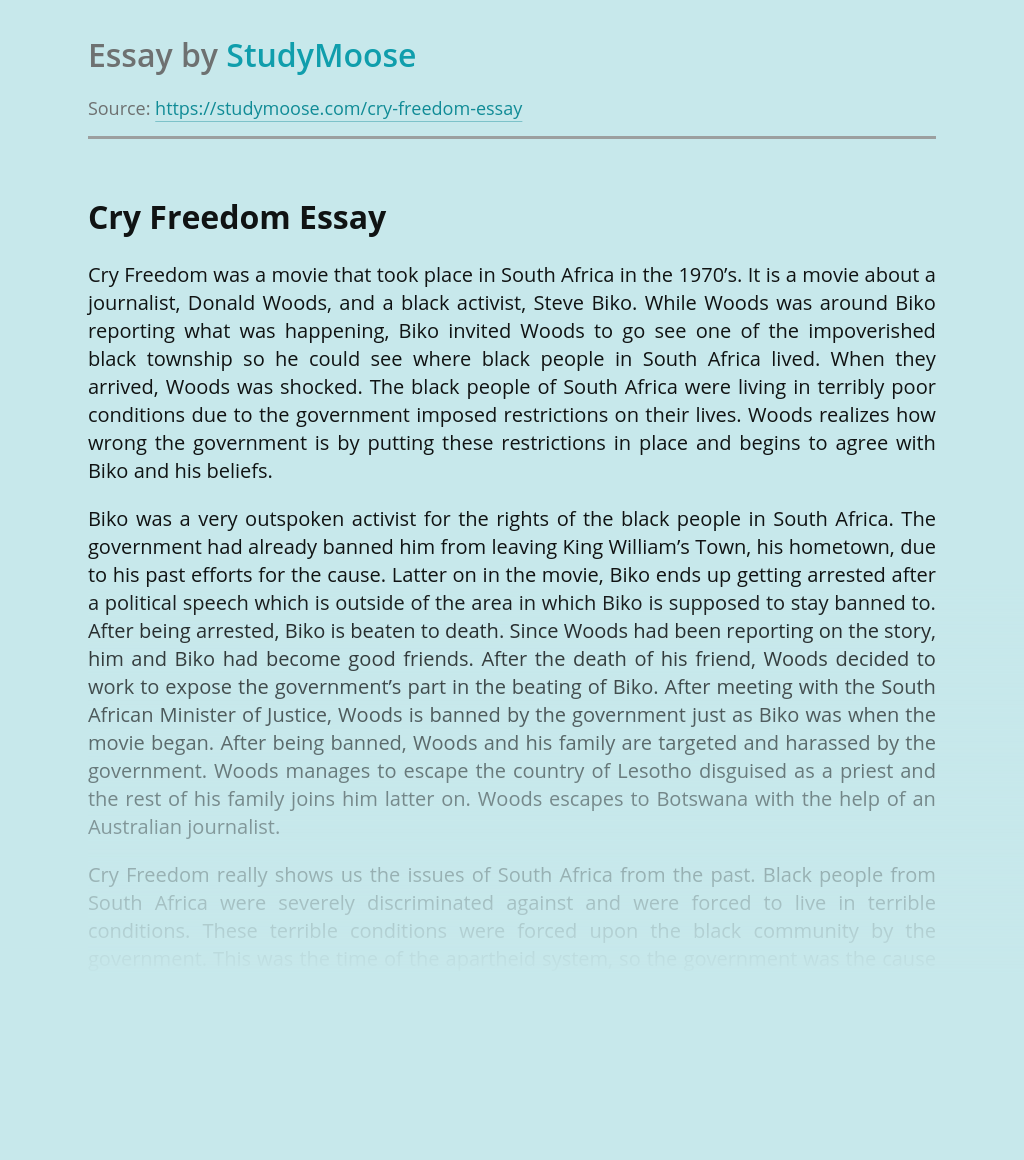 Rate this post In a time of political, economic, and social unrest, a new way of protest was beginning to emerge from Jamaica in the form of reggae music. It was 1963 when a young man from Jamaica by the name of Robert Nesta Marley, better known as “Bob Marley”, formed a band called The...

Get Essay
Youth, and Pop Culture of 1960s

Rate this post 1960s is one of the most transformative decades on the timeline of America, though those old days were gone now, its impacts were still so eventful and momentous that they cannot be neglected even in nowadays (which is already half a century away from then on). The impacts were mostly on popular...

Rate this post “Devil wears Prada” was presented in 2006, based on the Lauren Weisberger’s novel of the same name. This is the story about a girl named Andrea Sachs who want to be a real journalist. For her wish, she opted to become an assistance of Miranda, a tough editor-in-chief of Runway fashion magazine....

Rate this post The Australian identity is a diverse concept that has developed overtime through significant events in our history. As a result of these events, it is has established Australia into a multicultural society that now includes numerous new lifestyles. However, it is an evolving concept that is still becoming, as further cultures are...