Nelson Mandela a Most Admired Hero

Nelson Mandela is one of the best examples of heroes in contemporary times. He devoted his life to end the apartheid in South Africa. His struggle and devotion to this cause was so important that we could say that the international movement of solidarity with the struggle for freedom in South Africa was arguably the biggest social movement the world has seen. Nelson Rolihlahla Mandela was born on the 18th of July 1918 is a South African anti-apartheid revolutionary and politician who served as President of South Africa from 1994 to 1999.

Don't use plagiarized sources. Get your custom essay on
“ Nelson Mandela a Most Admired Hero ”
Get custom paper
NEW! smart matching with writer

He was the first black South African to hold the office, and the first elected in a fully representative, multiracial election. His government focused on dismantling the legacy of apartheid through tackling institutionalized racism, poverty and inequality, and fostering racial reconciliation.

A Xhosa born to the Thembu royal family, Mandela attended Fort Hare University and the University of Witwatersrand, where he studied law. Living in Johannesburg, he became involved in anti-colonial politics, joining the African National Congress and becoming a founding member of its Youth League.

After the Afrikaner nationalists of the National Party came to power in 1948 and began implementing the policy of apartheid, he rose to prominence in the ANC’s 1952Defiance Campaign, was elected President of the Transvaal ANC Branch and oversaw the 1955 Congress of the People. Working as a lawyer, he was repeatedly arrested for seditious activities and, with the ANC leadership, was prosecuted in the Treason Trial from 1956 to 1961 but was found not guilty.

Although initially committed to non-violent protest, in association with the South African Communist Party he co-founded the militant Umkhonto we Sizwe (MK) in 1961, leading a bombing campaign against government targets.

In 1962 he was arrested, convicted of sabotage and conspiracy to overthrow the government, and sentenced to life imprisonment in the Rivonia Trial. On 11 February 1990, Nelson Mandela is released from Victor Verster Prison after 27 years spent in jail. Four years later, Mandela is elected the first black President of South Africa. His presidency faces enormous challenges in the post-Apartheid era, including rampantnpoverty and crime. Mandela is particularly concerned about racial divisions between black and white South Africans, which could lead to violence.

The ill will which both groups hold towards each other is seen even in his own security detail where relations between the established white officers, who had guarded Mandela’s predecessors, and the black ANC additions to the security detail, are frosty and marked by mutual distrust. While attending a game of the Springboks, the country’s rugby union team, Mandela recognizes that the blacks in the stadium cheer against their “home” squad, as the mostly-white Springboks represent prejudice and apartheid in their minds. He remarks that he did the same while imprisoned on Robben Island.

Knowing that South Africa is set to host the 1995 Rugby World Cup in one year’s time, Mandela persuades a meeting of the newly black-dominated South African Sports Committee to support the Springboks. He then meets with the captain of the Springboks rugby team, François Pienaar, and implies that a Springboks victory in the World Cup will unite and inspire the nation. Mandela also shares with François a British poem, “Invictus, which had inspired him during his time in prison. François and his teammates train. Many South Africans, both black and white, doubt that rugby will unite a nation torn apart by some 50 years of racial tensions. For many blacks, especially the radicals, the Springboks symbolize white supremacy.

Both Mandela and Pienaar, however, stand firmly behind their theory that the game can successfully unite the South African country. Things begin to change as the players interact with the fans and begin a friendship with them. During the opening games, support for the Springboks begins to grow among the black population. By the second game, the whole country comes together to support the Springboks and Mandela’s efforts. Mandela’s security team also grows closer as the various officers come to respect their comrades’ professionalism and dedication. The Springboks surpass all expectations and qualify for the final against The All Blacks—South Africa’s arch-rivals. New Zealand and South Africa were universally regarded as the two greatest rugby nations, with the Springboks being the only side to have a winning record against the All Blacks up to this point.

The first test series between the two countries in 1921 was the beginning of an intense rivalry, with emotions running high whenever the two nations met on the rugby field. Before the game, the Springbok team visits Robben Island, where Mandela spent the first 18 of 27 years in jail. François Pienaar mentions his amazement that Mandela “could spend thirty years in a tiny cell, and come out ready to forgive the people who put him there”. Supported by a large home crowd of both races, Pienaar motivates his team. Mandela’s security detail receives a scare when, just before the match, a South African Airways Boeing 747 jetliner flies in low over the stadium. It is not an assassination attempt though, but a demonstration of patriotism, with the message “Good Luck, Bokke” — the Springboks’ Afrikaans nickname — painted on the undersides of the plane’s wings.

The Springboks win the match with a score of 15–12. Mandela and Pienaar meet on the field together to celebrate the improbable and unexpected victory. Mandela’s car then drives away in the traffic-jammed streets leaving the stadium. As Mandela watches the South Africans celebrating together from the car, his voice is heard reciting “Invictus”. Mandela has been a controversial figure for much of his life. Right-wing critics denounced him as a terrorist and communist sympathizer. He nevertheless gained international acclaim for his anti-colonial and anti-apartheid stance, having received more than 250 honors, including the 1993Nobel Peace Prize, the US Presidential Medal of Freedom, and the Soviet Order of Lenin. He is held in deep respect within South Africa, where he is often referred to by his Xhosa clan name, Madiba, or as Tata (“Father”); he is often described as “the father of the nation”.

Nelson Mandela a Most Admired Hero. (2016, Apr 11). Retrieved from https://studymoose.com/nelson-mandela-a-most-admired-hero-essay 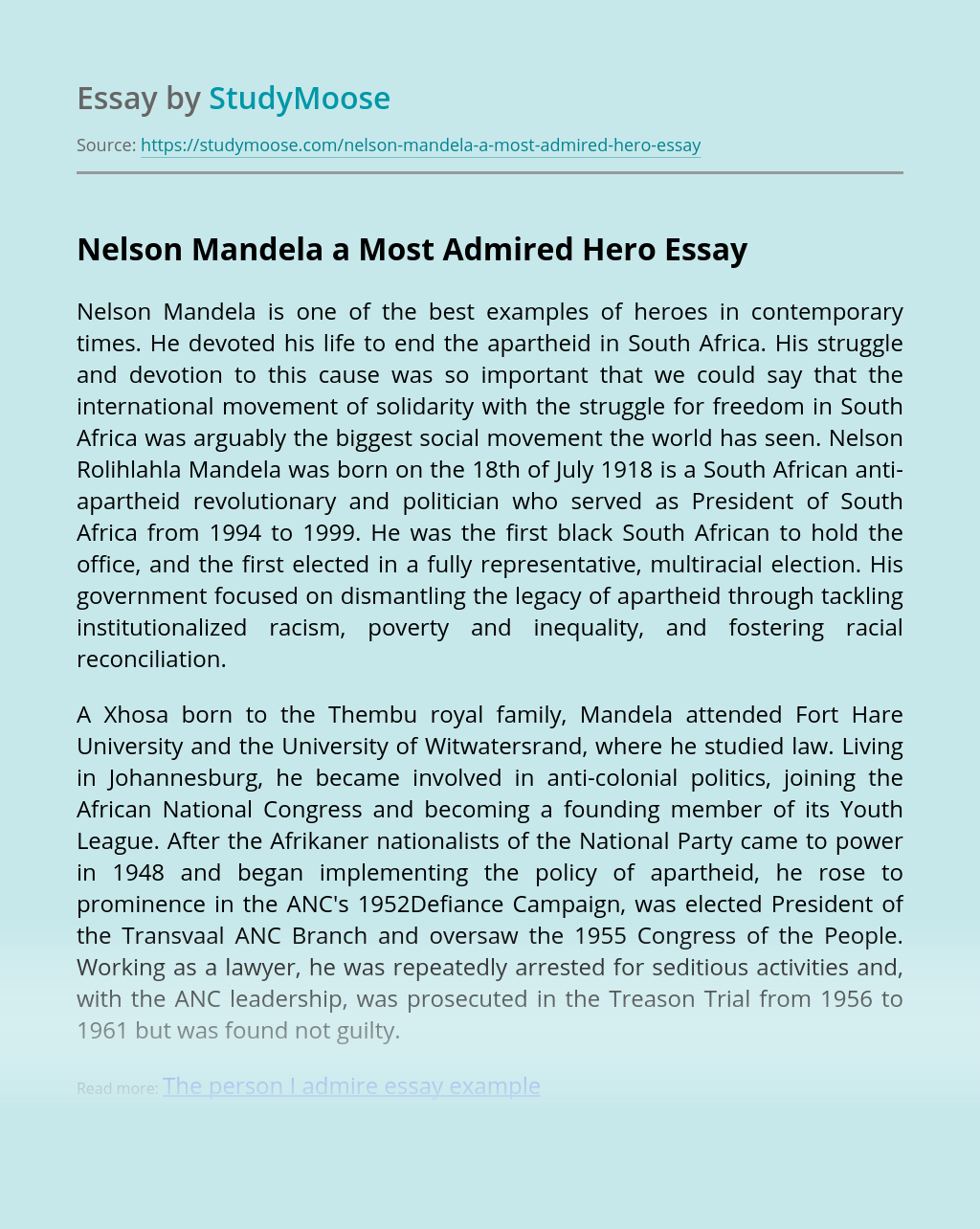