In a racially divided South Africa, Nelson Mandela emerged as a great leader. He joined the African National Congress (ANC) to lead a movement whose main goal is to eradicate apartheid. (Racial separation). He promoted peaceful protests to meet that goal; however, when the ruling party banned the ANC, he set a military wing within the ANC to take the resistance against the Apartheid to a new level where he had no choice other than using violence.

His actions landed him in prison for nearly three decades.

Don't use plagiarized sources. Get your custom essay on
“ Nelson Mandela’s Leadership ”
Get custom paper
NEW! smart matching with writer

He led secret negotiations with the ruling party while he was in prison aimed at dismantling the apartheid policies. Such negotiations, which resulted in his release in 1990, went on years later to bring an end to Apartheid. In 1994, he became the first black president of South Africa, forming a multiethnic government to oversee the country’s transition to a new era of democracy (1).

In 1999, he decided to retire from politics, but has not retired yet from promoting peace and social justice in South Africa as well as around the world.

Nelson Mandela developed “a strong relationship-oriented behavior, which contributed to his participative leadership style” (2). He learned from his guardian, when he was observing him presiding over tribal meetings, to listen to all sides of argument before venturing his opinion. It was his firsthand experience of how to lead from behind (9).

He always remembers the regent’s axiom. He said:” A leader is like a shepherd. He stays behind the flock, letting the most nimble go out ahead, whereupon the others follow, not realizing that all along they are being directed from behind.”(Long walk to freedom3). Mandela’s leadership success is attributed to his use of consensus.

He inspired his followers and gained their commitment to fight in the sake of abolishing apartheid when he was the leader of the ANC. He used the same participative leadership as president by forming a multiethnic government that includes the people who tortured him for 27 years. Throughout his battle against apartheid and helping to bring democracy to South Africa, Mandela adopted a democratic leadership style. According to Johnson and Johnson (2006), “Democratic leaders set policies through group discussion and decision, encouraging and helping group members to interact, requesting the cooperation of others” (4).

Mandela believed in the value of the democratic process, even though he did not always initially agree with the results. Some of his unsuccessful pursuits included when he tried during his imprisonment to have prisoners addressed more respectfully by guards, and later when he attempted to have the national voting age lowered to 14 (4). Charismatic leadership:

Nelson Mandela influential power stems largely from his charismatic leadership characterized by a compelling vision for the future, his willingness to take a risk for the sake of the well-being of his country, and the sense of forgiveness he demonstrated towards his enemy. Nelson Mandela was a visionary leader who articulated an idealized vision of a future that is significantly better than the present. He envisioned a South Africa where apartheid would finally abolished and everyone should live without worrying to be discriminated against based on race or color. It was this vision of a free and democratic South Africa that sustained him through the darkest days in prison.

Mandela knew that the risk he was taking was enormous, and the consequences could be devastating to him as well to the well-being of his family. He took the risk of setting a military wing within the ANC to combat the oppressive regime knowing that he will be the first one that the ruling party would target After becoming a president in 1994, he decided to forgive the people who tortured him for nearly three decades. Through this act, he demonstrated the the kind of charismatic qualities he possessed. .

Mandela acquired the respect and love of many citizens upon his release from prison, as it was inspiring to the nation that someone could “emerge from such hardship and humiliation and talk of forgiveness and reconciliation with the enemies who caused…suffering” (5). He used his servant leadership style to promote peace outside South Africa; he promoted reconciliation over retaliation to pave the way for progress and prosperity in the neighboring African
countries. (6) Ethical leadership

Mandela had strong ethical values through having a heart and soul of leadership by consistently promoting peaceful protests rather resorting to violence. From an early age, he was inspired to study law with the intention of defending black South Africans against the ruling party’s unfair treatment. Nelson Mandela as a lawyer voluntarily represented many detainees under the ANC. (Denenberg, 1995). (7) Leadership power

Specialized skills and knowledge gave Mandela expert power to be an influential figure. He graduated with law degree and huge political experiences gained when he was the leader of ANC. He utilized his knowledge to communicate with others prisoners who viewed him as a reference for any course of action within the prison such as hunger strike to get better living conditions.(8)

Also, Mandela inspired his followers by utilizing referent power, which was closely linked to his traits of trustworthiness and integrity. With his own lofty personality of charismatic leader, skills and knowledge, Mandela become a famous figure, which brought him a “prestige power” that he uses to promote social justice all over the world such as raising charities to overcome the poverty. Conclusion:

Nelson Mandela lived up to his quotation when he said: “it is better to lead from behind and to put others in front, especially when you celebrate victory when nice things occur. You take the front line when there is a danger. Then people will appreciate your leadership”. It’s clear that Mandela stood in favor of involving his followers in the decision making process.

He was always endeavored to listen to what each person has to say before he gives his opinion, which is often a consensus of what he heard in the conversation. That’s how he led from behind. He took the front and put his life as well as the life of his family at risk to free the black South African from the oppression of a white minority regime. Because he understood that unless that risk is taken, the unfair treatment against the native South African will continue forever. 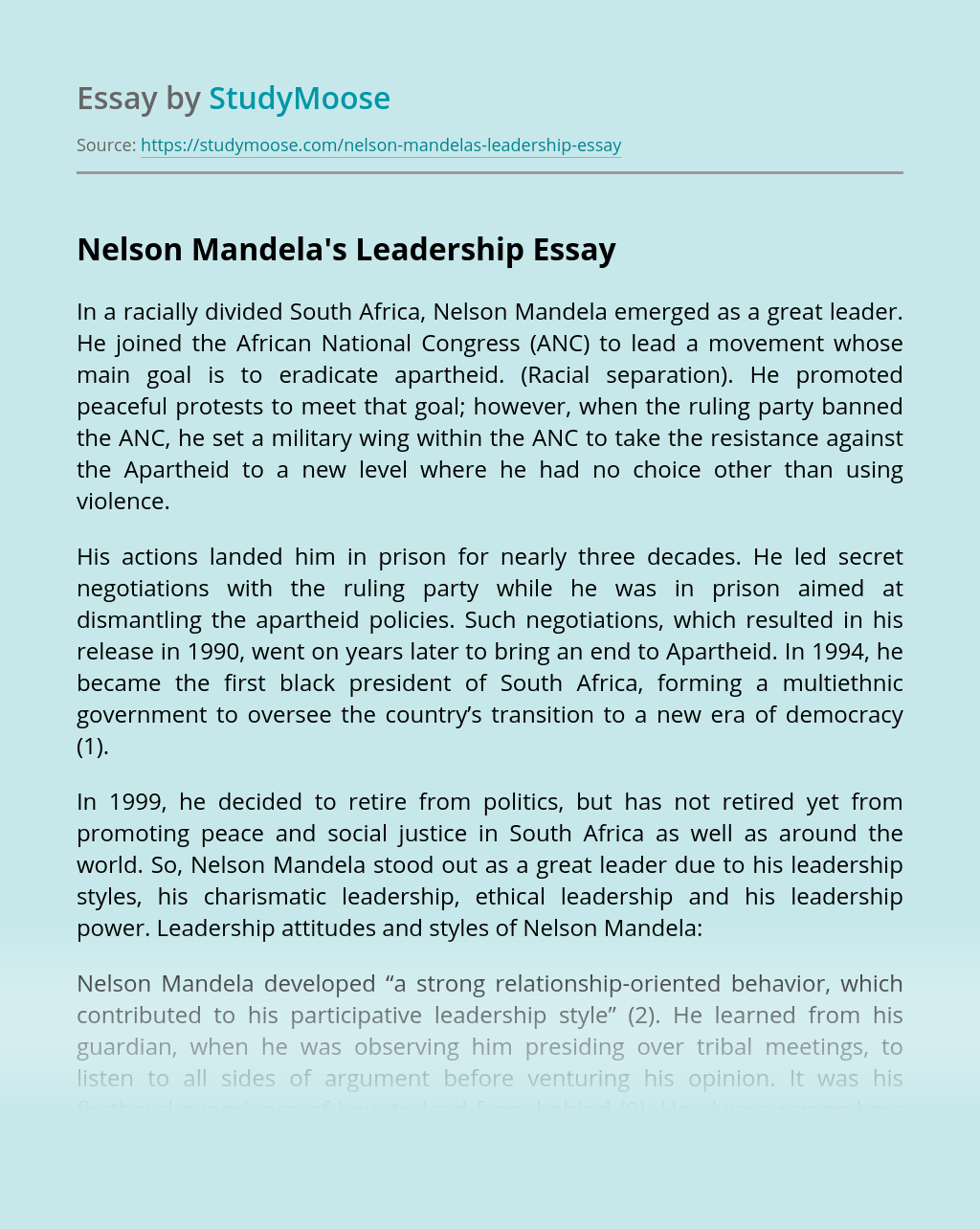