On May 10, 1994, Nelson Mandela was elected South Africa’s first black President, in that country’s first truly democratic election. Before his presidency, Mandela was an anti-apartheid activist and as a direct result ended up spending twenty-seven years in prison. He became a symbol of freedom and equality, while the apartheid government condemned him. After his release in February, 1990, he helped lead the transition into a multi-racial democracy for South Africa. The purpose of this communication is to look at Mandela’s effectiveness in his inaugural speech, which occurred May 10th, 1994 in Pretoria, through both the written speech as well as his presentation of that speech .

Mandela uses primarily the channels of ethos (character) and pathos (emotion). Through careful examination of both Mandela’s written work (his speech) and his actual presentation of that speech, I believe that Mandela’s written speech is a very effective piece of communication and thus argument. On the other hand, the way that Mandela presents and argues it, although effective, has its flaws.

Mandela’s written speech is eloquently written, in flowing sentences with dramatic and convincing language. His writing is uses many analogies. These are effective because it brings almost a third dimension to his speech. For example, “each one of us is as intimately attached to the soil of this beautiful country as are the famous jacaranda trees of Pretoria and the mimosa trees of the bushveld.” Here he uses not only an analogy, but also relates it intimately towards the people of South Africa.

Not only here, but through his writing he relates well to the people of South Africa (his audience) well. He speaks directly to them in fact, identifying himself as one of them.

This can be seen through Mandela referring to himself as “I” and to his audience not just in the informal, “you,” to break down a barrier, but in the very personal, “we,” thus including himself, and making himself a part of. This draws him closer to his audience through making his audience feel closer to him. Everything is an Argument talks about this, in Chapter 3, Arguments Based on Character, “Speaking to readers directly, using I or you, for instance, also enables you to come closer to them when that strategy is appropriate.” Through the use of analogies and his relation to the audience Mandela does two things; one establishes his credibility with his audience by becoming one with them, and two inspires them by touching their heart.

Another rhetorical device that Mandela uses which makes his writing effective is anaphora. Defined by americanrhetoric.com, this device is, “repetition that occurs when the first word or set of words in one sentence, clause, or phrase is/are repeated at or very near the beginning of successive sentences, clauses, or phrases; repetition of the initial word(s) over successive phrases or clauses.” One example of this device being used in by Mandela in this speech is, “Let there be justice for all. Let there be peace for all. Let there be work, bread, water and salt for all. Let each know that for each the body, the mind and the soul have been freed to fulfill themselves.” Here is another example of this device being used, “Never, never and never again shall it be that this beautiful land will again experience the oppression of one by another and suffer the indignity of being the skunk of the world.” In both examples this is effective because on top of the strong ideas and sentiment being proposed, due to the repetition, it is being almost branded into the audiences head.

I have watched Mandela present this speech several times , watching for what I believe are his strengths and weaknesses in making this a more effective argument. When Mandela speaks, there is hardly any inflection in his voice. However, simultaneously the tone of his voice does command respect from his audience. While Mandela speaks, he also uses no hand gesture, or gesture of any other form at all, nor makes any sustained eye contact at all. He holds his speech notes in his hand, and that is all, referring from notes and looking briefly at his audience, pausing and then looking back at his notes. One might say that this detracts from the effectiveness of his speech, in this reviewer’s opinion, I do not necessarily know if that is truth. I am not sure whether or not Mandela’s performance adds much to the written work, I think it is the fact that the speech is written so well that makes this speech such a top-notch argument and piece of communication; however I do not think that anything that Mandela does or does not do takes away.

While watching Mandela present his speech something that this reviewer also paid attention to was how his audience received Mandela which speaks loudly to the effectiveness. The audience seems excited to receive not only Mandela’s speech, but also Mandela the man. This means that Mandela’s argument has been persuasive; he has sold himself! Overall, I believe that Mandela’s speech is an effective argument and has written and presented an effective piece of communication. He has done this through these methods: using rhetorical devices, using pathos and ethos to get in touch with his audience, knowing his audience and thus knowing how to relate to and with them. 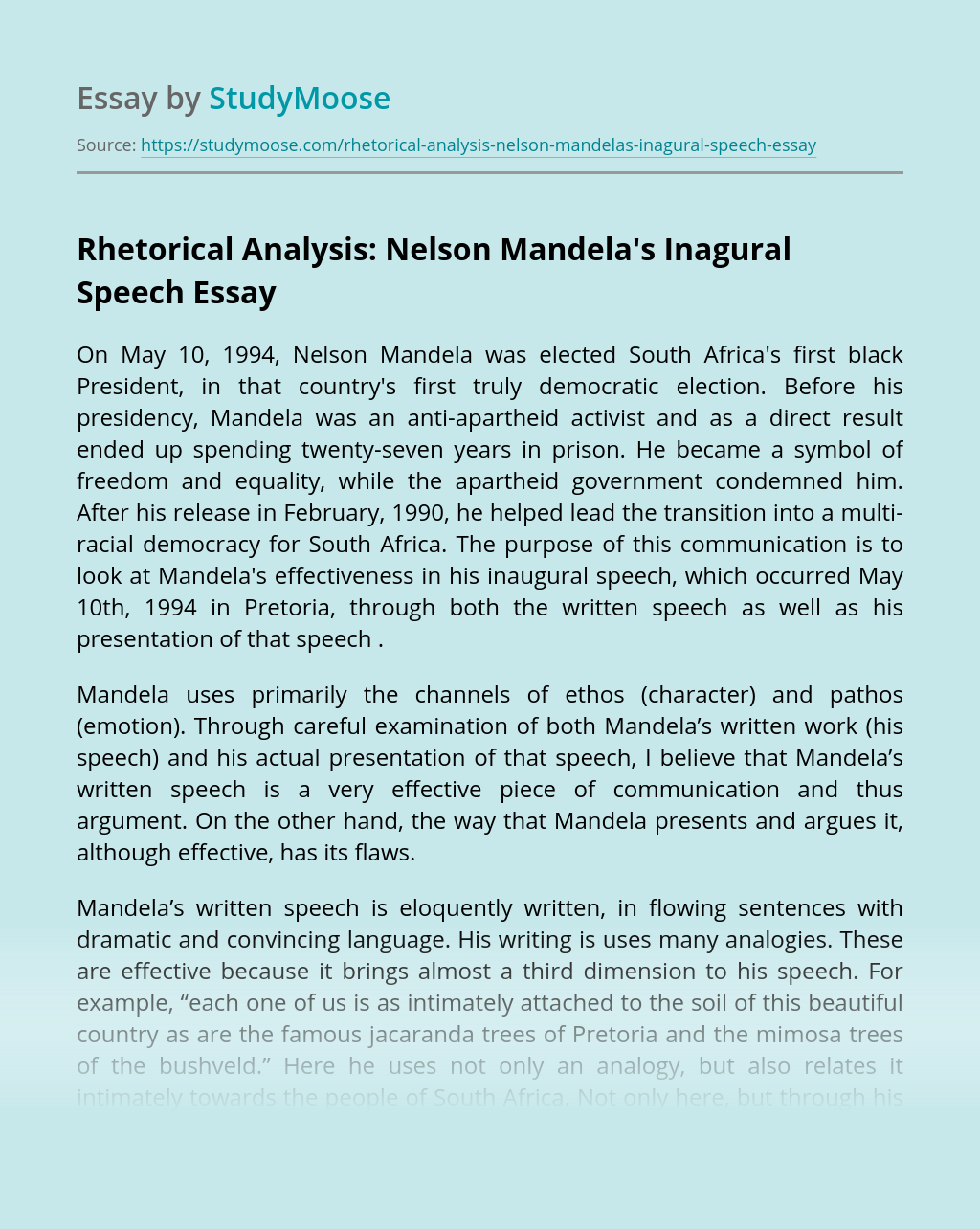