Nelson Mandela’s Speech “I Am Prepared to Die”

In 1962-1964, Nelson Mandela was charged for opposing the white government of South Africa, high treason, sabotage, and the conspiracy to overthrow the government. In his defense, Mandela gave a speech titled “I am Prepared to Die” at his trial. This speech is powerful and full of literary devices. In parts of this potent speech he utilizes facts, statistics, and allusions as a tool to his defense. In the beginnings of his speech he uses an anecdote, which is a short interesting story about a real incident or person.

Don't use plagiarized sources. Get your custom essay on
“ Nelson Mandela’s Speech “I Am Prepared to Die” ”
Get custom paper
NEW! smart matching with writer

Here Mandela states that as young boy in Transkei he listened to the elders of his tribe telling stories of how it used to be, and of wars their ancestors fought against the fatherland, and names such as Dingane, Bambata, Hinsta, and Makana were praised all over the African nation.

He uses this to elucidate that he hoped to help his people and make a difference in their freedom. As of the factual parts he states within them, that he admits he was one of the people who helped to form Umkhonto we Sizwe until he was arrested in August 1962, holds a Bachelor’s Degree in Arts and practiced as an attorney in Johannesburg, a convicted prisoner serving five years, and saying that more than 85,000 people defied the apartheid laws and went to jail.

With more facts throughout the speech, it gave Mandela more of a reasoning to not be convicted. As of the statistical portions of this speech he stated that more than 85,000 people were arrested for defying the apartheid laws, adaging that 70 percent of South Africa were not entitled to vote, also stating that sixty-nine unarmed Africans died at Sharpeville.

These statistics gave Mandela more edge to his defense and supported him.

Though Mandela’s speech was intense it wasn’t enough to find him innocent. He was sentenced to life, which he was released at 71 years of age, on February 11, 1990. Yet I still find that this speech was powerful. The literary devices gave him edge and his evidence was correct.

Nelson Mandela’s Speech “I Am Prepared to Die”. (2016, Dec 13). Retrieved from https://studymoose.com/nelson-mandelas-speech-i-am-prepared-to-die-essay 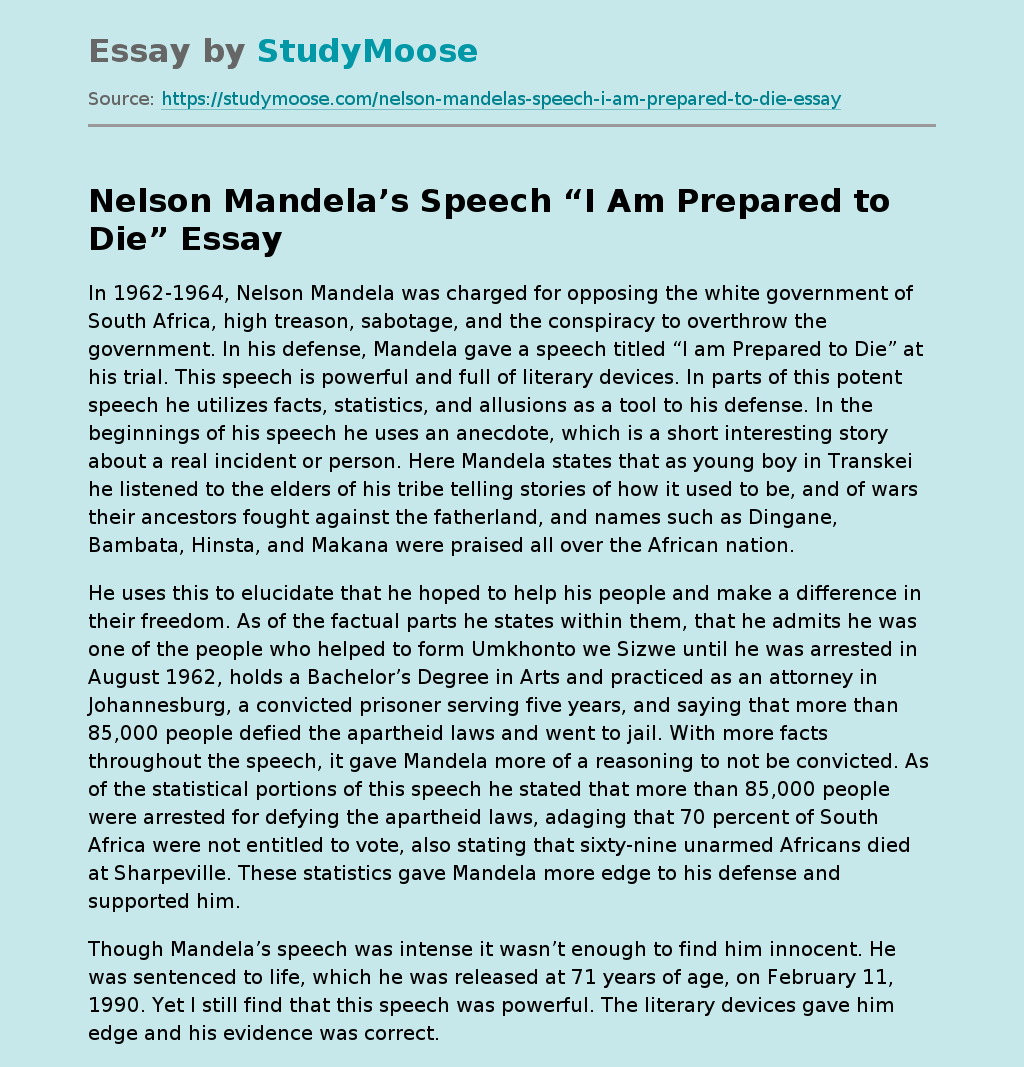