Liverpool has won more European titles than any other English club, with five European Cups (C1), three UEFA Cups (C2) and three UEFA Super Cups. Because of its remarkable achievements, Liverpool is known as “The Kop”. Liverpool’s Stadium is Anfield, which has a capacity of 45 522 people, located far from the city center about 4 kilometers. Liverpool has played at Anfield since it was founded up to now. They’ll expand the stadium in 2012 for more fans come to cheer home team.

Turn in your highest-quality paper
Get a qualified writer to help you with
“ Liverpool FC in Football History ”
Get high-quality paper
NEW! AI matching with writer

In the early days, Liverpool played well. Liverpool was promoted to First Division, which was renamed England Premier League from 1992, and won it in 1901 and 1906.

It also won consecutive two League Championships in 1922 and 1923. After then, the club began declining. It only won the fifth First Division in 1946-1947 season and it was relegated to the Second Division in the 1953–1954 season. In December 1959, Bill Shankly was appointed to club’s manager when Liverpool was weakening with old equipment and poor trained staff.

After that, he released 24 players who didn’t want to contribute to club anymore. He also created a room called “Boot Room” where the coaches could discuss the strategy. Shankly and other “Boot Room” members  Joe Fagan, Reuben Bennett, and Bob Paisley began reforming the team.

Since then, the history of club has gone to a next successful page. The club was promoted back into the First Division in 1962 and won it in 1964 after 17 years without titles. In 1965, the club won its first FA Cup and also won the League a year later.

Liverpool won both the League and the UEFA Cup in the 1972–1973 season, and the FA Cup again a year later. After this success, he retired in July 1974 and was replaced by his assistant, a Boot Room member, Bob Paisley. A statue of Bill Shankly was placed outside and he also was named to the big gate in front of the stadium in order to memorize his distribution at Anfield.

Bob Paisley even won more successful than Bill Shankly. In 1976-1977 season, his second season as manager, he led the club win both League and UEFA Cup. In the following season 1977-1978, the club successfully retained the League title and won the European Cup for the first time but lost in the FA Cup final, missed a chance to win a treble. Liverpool retained the European Cup in 1978 and regained the League title in 1979, only conceded 16 goals in 42 games. In 1980-1981 season, Liverpool won a League Cup and an European Cup.

During Paisley’s nine seasons as manager, Liverpool won 21 trophies, including three European Cups, a UEFA Cup, six League titles and three consecutive League Cups. The only domestic trophy he couldn’t win was the FA Cup. The most successful period in Liverpool’s history was the 1970s and 1980s, when Bill Shankly and Bob Paisley led the club to eleven League titles and seven European trophies. Paisley retired in 1983 and was replaced by his assistant, also a Boot Room member, Joe Fagan. Liverpool won the League, League Cup and European Cup in Fagan’s first season, becoming the first English club to win three trophies in a season.

In 1985, Liverpool came into European Cup final against Juventus at  the Heysel Stadium, Brussels, Belgium. Before kick-off, the Juventus fans were constantly throwing flares into the side of Liverpool fans made them angry. Then Liverpool fans attacked Juventus fans. As a result, many Juventus fans were herded into a wall then the wall collapsed, killing 39 fans. The tragedy was known as the Heysel Stadium Disaster. The match was played in spite of protests by both teams, and Liverpool lost 1–0 to Juventus. As a result of the tragedy, English clubs were banned from participating in European competition for five years.

Liverpool received a ten-year ban, which was later reduced to six years. The disaster was known as “the darkest in the history of football”. Fagan resigned after the disaster and Kenny Dalglish, also a Boot Room member, was appointed as a manager. During his reign, the club won another three League Championships and two FA Cups and a Double (League title &amp; League Cup) in the 1985–1986 season. 4 years after Heysel Disaster, another disaster related to Liverpool fans occurred. In an FA Cup semi-final against Nottingham Forest on 15 April 1989, hundreds of Liverpool fans were crushed against perimeter fencing.

Ninety four fans died that day, the 95th victim died in hospital from his injuries four days later and the 96th died nearly four years later. After the Hillsborough disaster there was a government review of stadium safety. According to the Taylor Report, the main reason for the disaster was overcrowding therefore the police lost control. After then, a law has been enacted that stadiums in the League Championships must remove perimeter fencing, the stands should be covered by seats. In 1991, Dalglish suddenly resigned due to the repercussion of Hillsborough disaster. 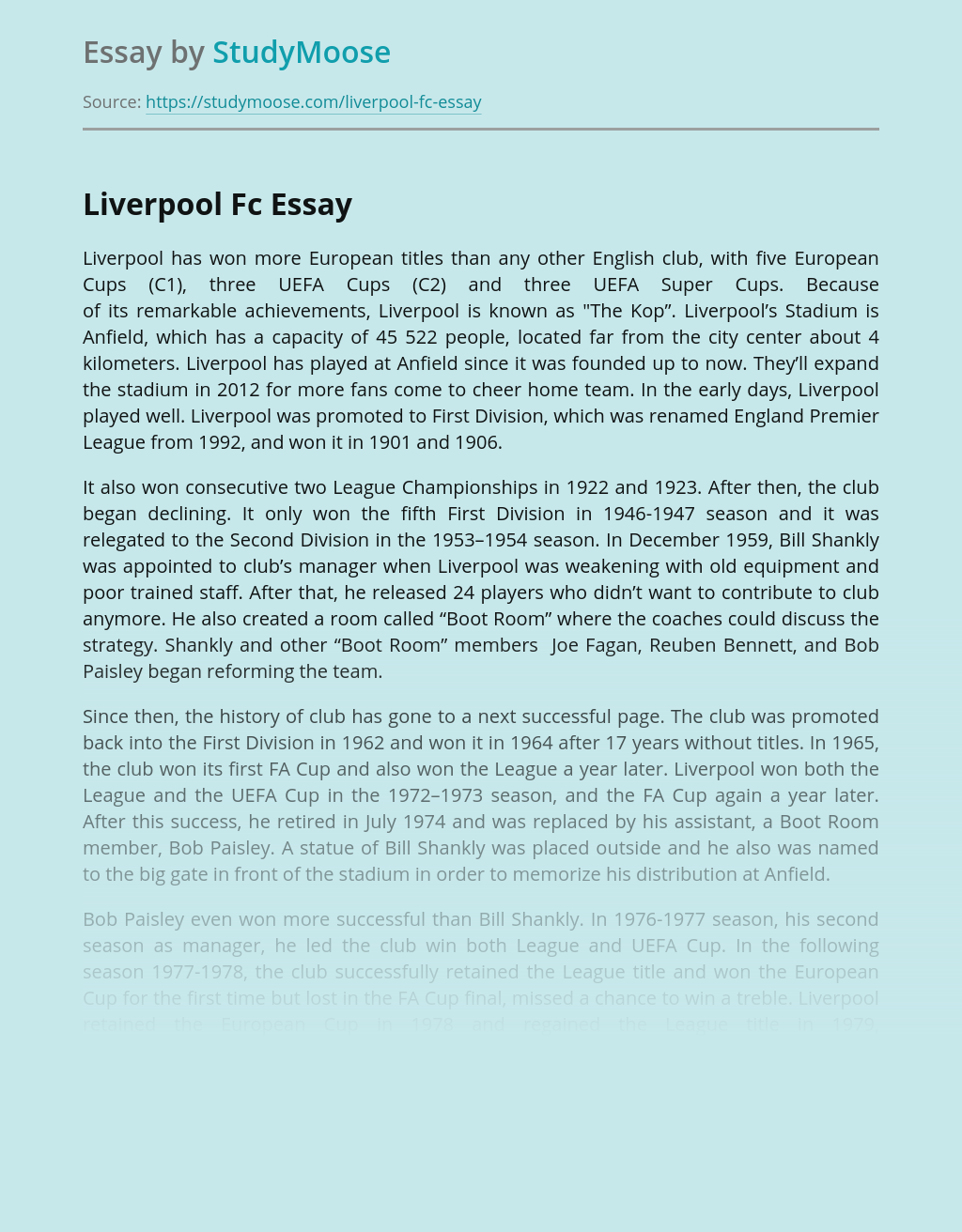 Turn in your highest-quality paper
Get a qualified writer to help you with
“ Liverpool FC in Football History ”
Get high-quality paper
Helping students since 2015
Stay Safe, Stay Original