Section 1
Disney’s corporate strategy till 1994 was rooted on Walt Disney’s vision to “create universal timeless family entertainment.” Disney’s synergistic and coherent strategies supported the enterprise expansions and market growths during this period with stellar financial results as well as the timeless brand image. The strategies and the successful effects can be described into four categories (see Exhibit 1 for Disney’s strategic activities) Control of quality and financials, vertical integration

Disney established its own distribution house, film studio, music label and so on to better control quality content and costs. Synergies among business sectors with the same corporate culture & value made the communication and production more efficient and effective. Control of Brand Image

To better promote and differentiate itself from competitors, Disney used horizontal integration to promote the same product to gain more customer interests. Disney’s Broadway shows were produced to promote Disney’s brand and parades were used to attract people’s attention.

Also, licensing characters was not only about cash flow, but also to refresh them and keep the characters live longer in customer’s mind. Therefore, it was important for Disney to be selective and careful about its copyright and distribution in order to maintain its high brand equity and to completely control the entertainment experiences.

In addition, more contents for adults were produced to expand beyond the “family entertainment” base which offered animation, theme parks, movies and many more that fit into the mainstream market. Geographic Expansion was the next logical step once the United States market was saturated and Tokyo’s positive feedback gave Disney the needed confidence and cash flow to implant the formula elsewhere. Leadership and Creativity

Disney relied heavily on one key executive who had a great vision for the company to manage the creativity of the company. Walt Disney created the animated film then led his theme park vision to create a total entertainment for the whole family. Eisner envisioned the annual 20% revenue growth by implanting leadership and creative market strategies to reach the goal. Section 2

Eisner recruited outside top executives to rebuild deteriorating TV and Movie business. To appeal to broader audience, Disney expanded into mature audience market. This strategy quickly turned movie division to be profitable and became the market leader. To maximize theme park’s profitability, Disney updated and expanded attractions at the parks to attract more visitors, and used attendance-building strategies as well as raising ticket prices to offset the investment.

In Eisner’s first four years, he aggressively focused on increasing revenue stream, and controlled cost tightly, which directly improved the bottom line. SG&A were maintained at flat level even with the increasing revenues from 1984 to 1988. By expanding movie and TV market to adults, revenues from these two divisions quickly improved. Eisner focused on moderately budgeted movies to keep costs low by identifying good scripts from unknown writers and hiring well-known actors in career slumps and TV actors. Cross promotion of licensing and TV syndication to re-use old materials were implemented to make quick profits. Section 3

Since the company started in 1923, quality, creativity, entrepreneurship, and teamwork have been the core of Disney’s corporate values. Walt E. Disney himself was known for his commitment to excellence and hardworking management style. The corporate structure was very flat and non-hierarchical where practically no one had a title. These values and corporate structure helped Disney to achieve synergy across the company, introduce creative ideas and control quality of the work. However, after Disney passed away in 1966, the corporate values began to fade as the management team in film division struggled to come up with creative and innovative ideas. Pre-1984 years, Disney also had been characterized as family controlled company and as family-oriented entertainment provider. In 1984, Eisner took over Disney as an outsider but he quickly instilled the same corporate values introduced by Walt Disney and simultaneously introduced frictions based on his promise of maximizing shareholder’s return of 20%.

The company structure became more hierarchical as Eisner hired outside talents to run the Disney’s motion pictures and television division, formed a strategic planning group, and introduced corporate marketing group. Eisner put heavy focus on financial performance and at the same time emphasized on expansive and innovative ideas, which created conflicts between financial and creative groups within the company. Furthermore, Eisner broke the tradition of only providing family-oriented entertainment and got Disney into mature audience market.

Section 4
The strategic logic of the acquisition of ABC was due to several reasons. First of all is growth expansion. Disney wanted to grow its entertainment business, and be the #1 entertainment company. ABC had been the top rated network and built a global media network channel. Acquiring ABC would give Disney access to viewers around the world. At the time of the merger, Disney’s business portfolio consisted mostly of cash cows: studios, theme park, consumer products (see Exhibit 2). Disney had significant market share and revenues, but the markets served were experiencing low growth rates, with the exception of internet content which Disney had a very small market share (see Exhibit 3). The media network business was, at that time, still a high growth business with a growth rate of 20.6% (calculated from ABC’s revenue 5 years following the merger), and ABC at that time was the market leader in that segment which would make it a star in the BCG matrix. Given Eisner’s goal of achieving return on stockholder equity of more than 20%, ABC offered high growth rate which fitted very well into Eisner’s plan. Also, ABC’s acquisition complemented Disney’s corporate strategy of vertical integration, giving more control over the value chain.

Instead of relying on partnerships and agreements with various distribution networks; Disney would own distribution network for complete control over its contents, as well as consolidated resources and reduced cost of operations. The acquisition also added to Disney’s horizontal integration as a content provider. ABC had rights to content media different from Disney’s traditional studio business. One such content category was sports, namely the ESPN sports channel, which was the most profitable sports channel at that time, as well as content targeted towards the adult audience. This would also enable cross-promotion between Disney’s content and ABC’s content. Overall, the increased vertical and horizontal integration would open up possibilities for synergy, which Michael Eisner had made a focal point of his management team. There were several well-intentioned strategic reasons why the merger made sense both to ABC and Disney, and they were aligned with Disney’s corporate strategies of fostering synergy, encouraging creativity, controlling quality and improving financial performance.

Section 5
The core corporate strategies of Disney from pre-1995 years continued on through the period 1995-2000: such as synergies across business units, cost control, distribution control, geographic, vertical, and horizontal expansions, etc. After the acquisition of ABC, even though ABC took Disney into other non-related markets, Disney actually maintained the same corporate strategies in terms of expansions with synergies by controlling high quality contents, distribution, and financial aspects of the business units.

However, the acquisition of ABC brought new challenges to Disney at the corporate level in dealing with the corporate strategies at much bigger scales and broader diversities. Disney was already experienced with managing multi-brands like Touchstone, Miramax, and Hyperion, but the association with ABC made the brand equity more difficult to manage due to the incongruent approaches of diversified businesses. Furthermore, the inherent synergies that Disney valued in the previous years became obsolete, thus Eisner had to put more efforts into making sure that “the outsiders” received the injection of Disney’s core values and establishing performance metrics based on synergistic business growth.

Geographically, ABC, CineNova, and Internet added to the global delivery arms putting Disney in good position for international and untapped regions growth. With the international market offering Disney the biggest growth potential, the global access certainly puts Disney in better position than before. Vertically, ABC added distribution channels with more TV and radio network, Club Disney added retail stores at malls, and internet added services for consumers to deal online. Disney’s long term corporate strategy of controlling the production and distribution puts Disney as a corporate in stronger position than before. Horizontally, Disney expanded into other types of entertainment like sports, cruise ships, and mature themed Broadway shows. With wider horizontal expansion and diversification, Disney is in better position to cross-promote at a bigger scale.

Overall, Disney’s acquisition of ABC and other expansions demonstrate good strategic fits with additional resources and capabilities to grow and enter into new markets. However, Disney’s financial performance has been deteriorating with ROE going from 12% in 1997 down to 4% in 2000, whereas ROE numbers were in double digits for the years leading up to 1994. One major area of difference is synergy being much weaker now with ABC acquisition diluting the traditional force behind the synergistic values. So, it appears that Disney is struggling with the execution of the core strategies. Disney’s success will attribute to how well the corporate coordinates the synergies among business units to bring values to each BU in terms of sharing, leveraging, cross-promoting the growth potentials. Disney’s corporate strategies for providing leadership and creativity, as well as tight financial management, will need to continue as the backbones of the company. 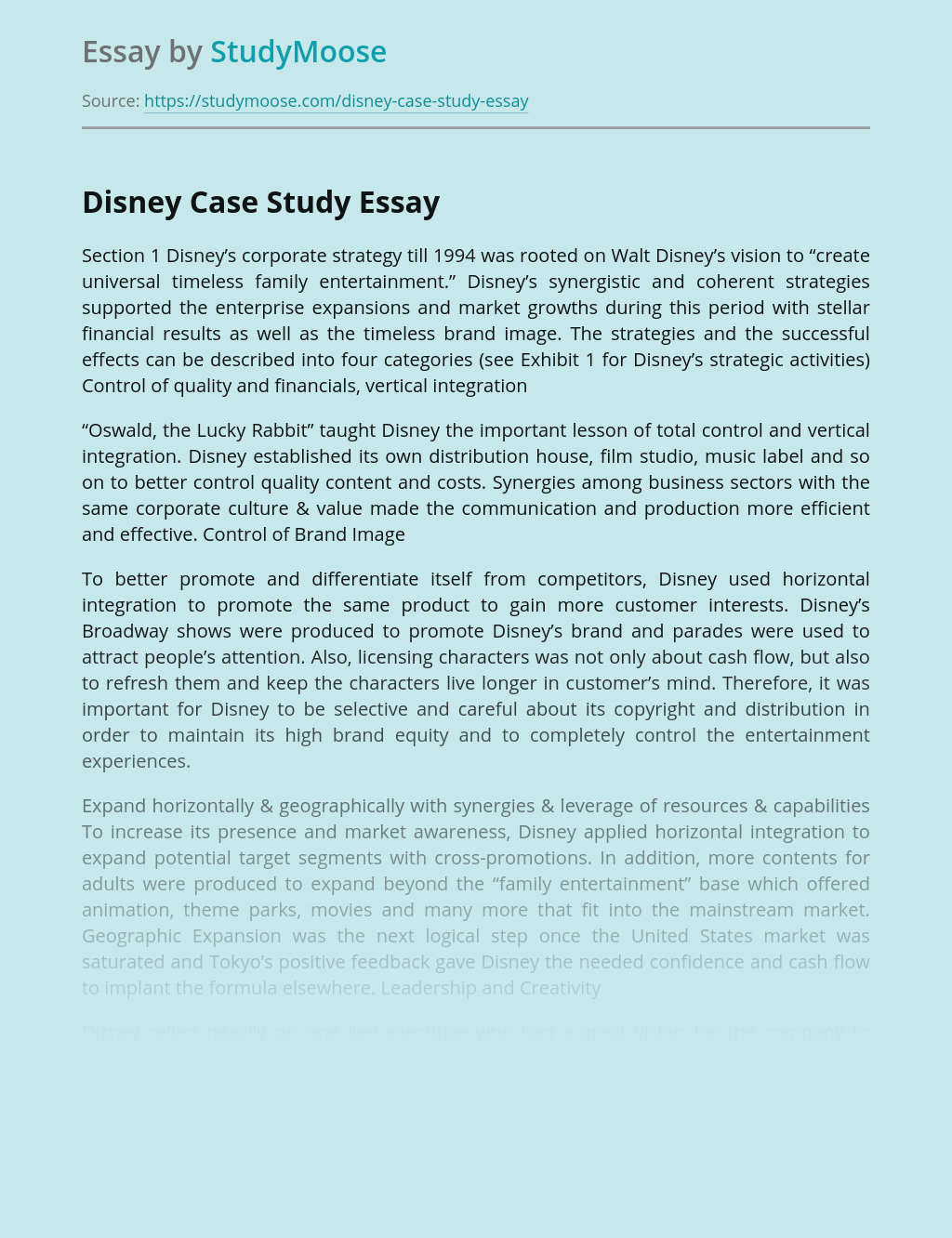