1.Briefly describe the type(s) of diversification strategies that Walt Disney pursues/has pursued over the years. The Walt Disney company can be seen as a highly diversified company. Over the years, it has pursued a wide range of diversification strategies that we can enhance:·Horizontal integration: obviously, Walt Disney has invaded several markets, diversifying its offer to many fields. In 2000, we can find five big main fields of action where Walt Disney operates: Media Network, studio entertainment, theme parks and resort, consumer products and internet and direct marketing.

Moreover, each of these categories is itself divided in other categories characterized by the horizontal diversification strategy. For instance, we can break the media network category in two: broadcasting and cable network. ·In a way, we can also consider that Walt Disney favored vertical integration: for instance, many of its products (books, magazines, VHS, audio and computer software, etc) were sold in stores simultaneously owned by Disney.

The acquisition of ABC can also be considered as an expression of this strategy of vertical integration, to the extent that it was a way for Walt Disney to diffuse some of its programs on its own.

·In 1954, Walt Disney started pursuing a strategy of financial economies: the ABC-produced television program Disneyland was actually destined to generate financing and stimulate public interest. The creation of the first park in 1955 pursued the same strategy. ·With Eisner, management incentives appeared with the employees training. ·At the same time, the efforts made to maximize theme park profitability were the result of a revenue enhancement strategy by coordinating the businesses in order to increase to willingness to pay of the consumers; The “retail-as-entertainment” concept is coherent with this strategy.

The calendar of promotional activities of the next six months, introduced in 1987, responded to this strategy too through the concept of “cross promotion”. The different strategies presented were used several times over the years, for different purposes. The main point is that Walt Disney relied on many logics of diversification to implement the introduction of new products on the market, and to diversify its activity, that is why its activity seemed to be so flourishing and so wide. 2.What is the critical resource that Walt Disney is trying to leverage in its businesses?Walt Disney handles a lot of resources in its businesses, but we can consider that there is one main critical resource that it tries to leverage: creativity, and in a way, all the resources that are linked to it (intellectual property for instance). Actually, over the years, Walt Disney adopted different strategies, diversified its activity, always trying to manage creativity in the best way. Under Einer, creativity was handled through the brain-storming meetings, and when they were reduced or became useless, they were regretted.

Furthermore, the only way to survive for the company was to keep being creative, which is why it had hard times when creativity was not sufficient or handled correctly. Diversification is also a way to expand creativity to many fields keeping the Walt Disney spirit and culture. 3.The period from 1984 until about 1994 was a successful one for Walt Disney. How was Disney set up to extract so much value out of its businesses?The years 1984-1994 were those of change for Walt Disney, under the management of Eisner. And success followed changes and innovations. Disney used several ways to extracts so much value out of its businesses:The movies industry was enhanced: Walt Disney released many new movies, basically 15 to 18 per year. Katzanberg was a major actor of this change, for he had a real talent in finding good script and attract good actors and actress and partners. New attractions made the theme parks even more successful, while they had remained profitable even after the Disney brothers’ death. A meeting of all divisions was frequently organized to generate new ideas.

Euro Disney was created. For the other parks, attractions were added, and expansion of the hostels emphasized in order to encourage longer says and to attract major conferences. Diversification was pursued over these years: the consumer products division entered books, magazines, and record publishing. The Walt Disney culture widened to a lot of products and markets. The “sell through” approach allowed Walt Disney to market videos at low prices to purchase by consumer. Acquiring a National Hockey League expansion team added also value to Disney businesses. Actually, the team was located near to Disneyland to Anaheim, was attracting and made Disney good advertising, expanding again its culture. Making theater shows of the motion pictures, like for the theater production of Beauty and the Beast, can also be seen as a way to increase the value of the motion picture. Finally, between 1984 and 1994, Walt Disney kept diversifying, but in more efficient ways, trying to add value to many of its businesses. Actually, many new activities added values to the motion pictures and the parks, which were Disney’s main businesses.

4.Looking at Disney’s business lines in 2000/2001, do you think that Disney is in the right mix of businesses and that its strategy is well chosen? Why or why not? What (if anything) would you change?In 2000, the first category for revenue was media network, with more than $9,000. In regard to this figure, Internet and Direct Marketing only totaled $368. There were actually inequalities between the many activities and fields where Disney operated. What is more, the ROE of the company seriously decreased over the year, passing from 25% in 1988 to 4% in 2000. The efficiency of the structure of the company needs then to be questioned. We can easily think that Walt Disney is too diversified. Acting in so many fields and markets does not help in a context of a declining economy (households have less and less money for entertainment) and of a growing competition, especially in some markets (theme parks, studio entertainment·).

That is why a focused global strategy could be appropriate and favorable for the company. The best way to initiate change in Walt Disney current structure could be to assess the profitability of each of the segments in which it is present. But we should also take into account the importance of the benefits in terms of image and culture provided by each segment to the company. Actually, we can observe that in 2000, Studio Entertainment generated less revenue than Media Networks. But the core activity of Walt Disney is embodied by its animated features. All its other activities are related to it and could not exist without this main activity. We should then remind that the core of the company is mainly these features, the movies, and the theme parks, which are still profitable and are very important for the image of the brand, as the embodiment of Walt Disney culture.

Maybe Walt Disney should envision going back to these core activities, and forgetting about the diversification strategies it had been pursuing over the years. Sports complex for instance seem not to be very close to Walt Disney’s core activity. In the same way, movies for adults, even if there are parts of the entertainment industry, can be seen as far from the magic of Disney. But we should also acknowledge that for such a diversified company, Walt Disney handles pretty well the wide range of its activities and their coordination. More globally, creativity and coordination should always exist in and between the many segments where the firm operates and in and between all the actions that it is undertaking. 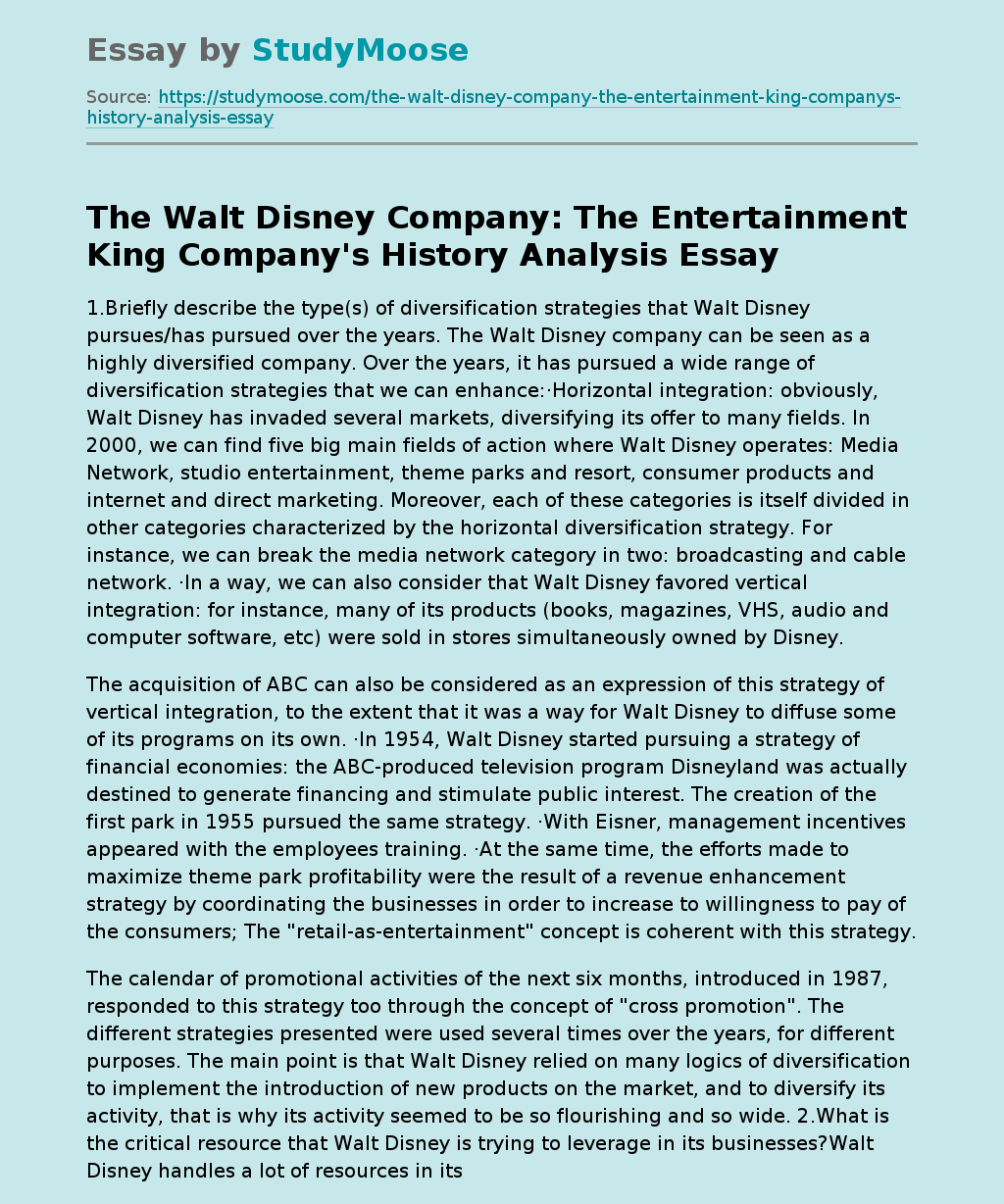