Walt Disney imagineering is the creative arm for the Walt Disney Company. It creates the theme parks all around the world “we dream it up, come up with the ideas and we design it and we build it” I felt there should be a place built where parents and children could have fun together In 1955, Walt Disney famed for creating timeless and memorable animated feature films as Cinderella and snow white and the 7 dwarfs opened what became to be known as the happiest place on earth.

Don't use plagiarized sources. Get your custom essay on
“ Walt Disney Company ”
Get custom paper
NEW! smart matching with writer

To help realize the Disneyland theme park, he created Walt Disney Imagineering a group of artists and craftspeople who design and create Disney themed venues “It all started with a daddy with 2 daughters wondering where he could take them where he could have a little fun with those two “ Being the first of its kind, Disneyland, with its differently themed lands, live visits from animated characters and a host of remarkable innovations in animatronics was a smash hit The park faced its share of opening day troubles like malfunctioning water fountains n hot opening day but overall it was operating safely in California 16 years later, the one and only happiest place on earth began appearing in other places on earth.

The first expansion to Walt Disney world in Florida created new opportunities for Imagineering to experiment and they created attractions like Epcot center – a taste of cultures from all over the world.

The results drew fans from across the globe, but later iterations at the park in Europe and Asia are the first real experiments in bringing Disney entertainment directly and personally to a global audience right in their front yard.

But how does a company like Disney preserve its fundamental message and still cater to the widely varying tastes of the different world cultures. Well it takes a good bit of Imagineering. “The Disney brand works so well because at its core the brand is about very human traits. Things that resonate across the human experience. There’s stories about families, humor, our fears and those kind of translate across all languages and cultures.

Every time a child walks into a Disney resort, Europe or asia, they are participating In global trade. A company like Disney has a profound impact on a new market financially and culturally. With the us representing only 5% of the world population, there is good reason for Disney to seek to enter new markets. The Walt Disney company has 3 companywide strategic priorities. Creativity and innovation, the application of technology, and global expansion. In return our guests get unique one of a kind and very memorable experiences that they will relive for the rest of their lives. But entering a new market like China for example, is not as simple as setting up a theme park and opening the gates.

A company may experience barriers to trade like language and cultural differences, political challenges and the need to deal in foreign currencies. From a cultural standpoint, HongKongs Disneyland tomorrowland provided a particularly creative challenge for the imagineers.

But how are we going to do this? How are we going to present tomorrowland to the people who are living in it? It’s a city of glass and steel, beautiful lighting, moving sidewalks; air conditioned covered walkways and great public transportation system. And so we decided to really take the story of tomorrowland off planet earth and move it to a planet far away in the galaxy. The opening of a Disneyland in china is a win win situation.

Disney brings family oriented entertainment to a new market and HongKong enjoys both the fresh experience and foreign appeal of Disney land as well as strong stimulation to the local economy in the form of tourism. In fact the Hongkong government played a major role in helping Hongkong Disneyland to become a reality. Obviously they are an investor in the park, but they also took the lead role in creating the landfill on which the park and resort are built, they also were responsible for all of the infrastructure to support the operation of the resort.  To actually build a Disney theme park takes both imagination and engineering – Imagineering. But where do imagineers come from? Certainly, Disney has its own staff. Entering a local market, gives you both a challenge and an opportunity.

While the design fundamentally takes place in Glendale, we hire additional people in Hongkong and I’m talking about architects, engineers, set designers, you don’t want to bring everyone from California, you want to use the local talent, you identify the best people you can while the project is being designed and then you keep the cream of the crop on staff and they become a part of the legacy moving forward for Imagineering based locally in that area. But building the park is only half the battle the imagineers have to be sensitive to the needs of each market and that sometimes means not assuming too much because a market’s expectations can be unexpected.

While the park is coming up out on the ground, we begin to get kind of a sense of where we ought to be going with food or language. One might think that in France, we wouldn’t want to have American cuisine, that they’d want to have their own local indigenous cuisine, it is kind of the culinary capital of the world, but in fact we found out that they do want a little bit more than what we were offering, they do want the burgers and what we call “grazing food” – the food that people can have as they walk through the park. All in all every Disneyland is both a uniquely local experience and an entertainment very faithful to the Disney tradition.

No matter where in the world Disney and the imagineers go, they have to achieve both goals. It’s a small world after all. Disney theme park experience is so loved because it allows our guests for at least a day to plan a world of their imagination and we create these great stages, these worlds that are filled with fantasy imagery and optimistic look at the future and you get to be a player in that world for a day When first seeking to do business in a foreign land, job one is learning the culture- you want to maintain your integrity as a company but you must also respect the sensitivities of your market. In Honkong for example, they were careful to honor the ancient Chinese practice of achieving harmony with the environment.

We had a feng shui consultant who worked with us all the way through to help us with many of those key decisions, and orientations – the positioning of the hotels the positioning of the promenade, where the train comes in, where the park and the resort sits overall with respect to the south china sea and the hills in the background. Another thing in Japan, gift giving is really big part of their culture. So most of our shops are very popular and have a very high volume of guest traffic so we actually have to have more cash registers, we have to have more queuing to account for that. There are simpler traditions to honor as well. Such as the greater affinity the asian market has for taking photographs. We put so much attention into everything whether it’s a railing, a lamppost, a mailbox, a park bench, every one of those moments we create, it’s nice to know that people are caring and appreciative of what we do .

Imagineering will continue to accept the challenge of bringing Disney to new places around the world, carrying the lessons that it’s learned elsewhere. But imagineers will also have to use the insight that they’ve gained to anticipate challenges that have not yet proven very difficult. Hongkong has a diverse history being a British protectoral. It has a free market economy, a great deal of western influence, and of course the predominant language was English. In other Asian markets however, there are many cultural differences that we must encounter and adapt to and probably one of the most significant difference is Language. But Imagineering is also open to ideas that it hasn’t thought of.

The company collects a great deal of feedback after a park like Tokyo Disneyland opens for use in future projects or to improve current venues. And of course the internet is one way to collect such feedback. We do use the internet for feedback. Mostly listening to in Japan, our guests are giving us information about trends and things that are popular in the culture at the time. And we use that information more to adjust what we call the software which is our entertainment and our special events. But at the core of what we deliver, in our attractions, they have to be universal; events can be timely but our core attractions have to be timeless. And send a good message about what the world is about, that it is optimistic. 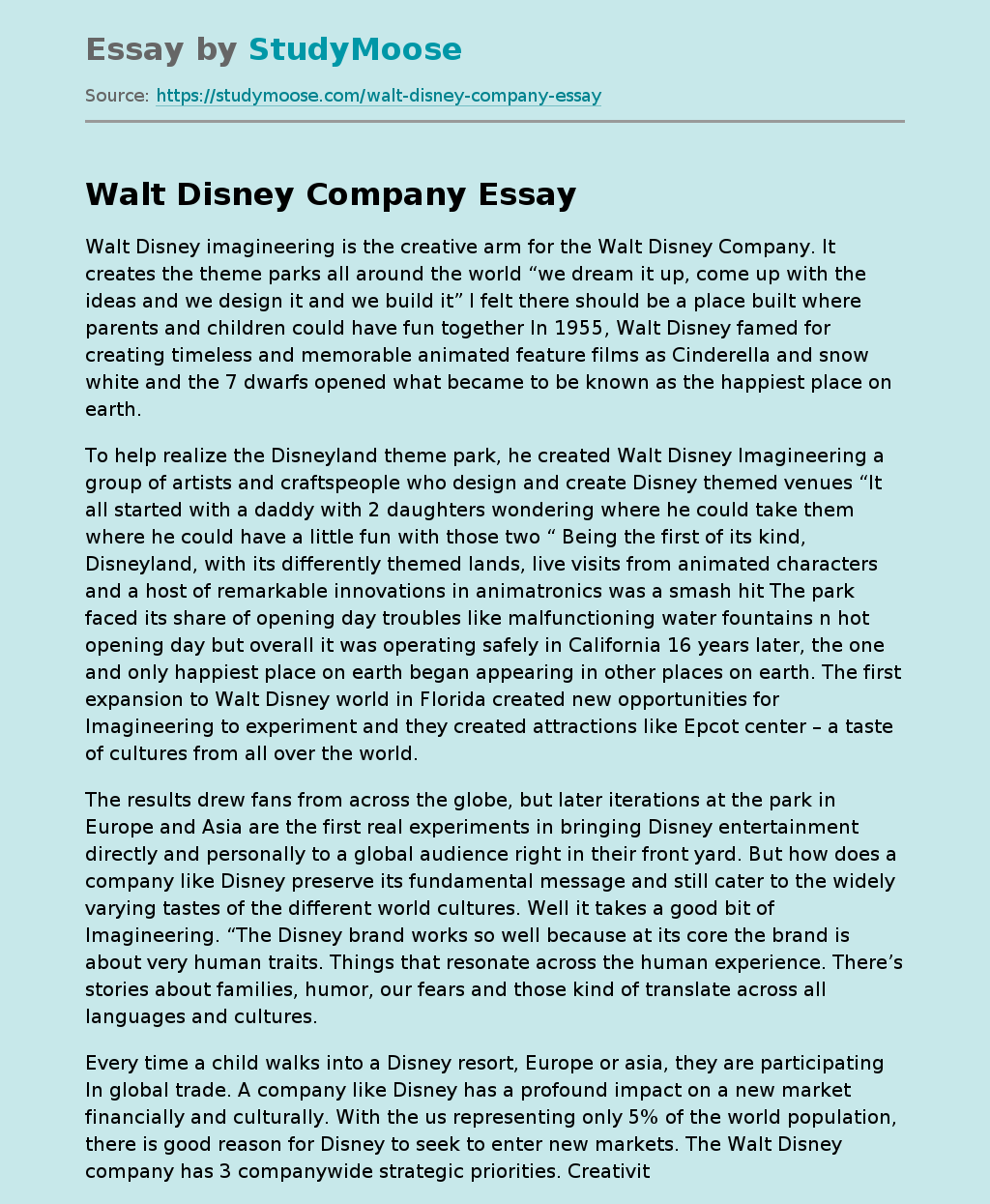