Don't use plagiarized sources. Get your custom essay on
“ Control Mechanisms: The Walt Disney Company ”
Get custom paper
NEW! smart matching with writer

Budgetary controls are a well known and frequently used control measure throughout corporate America and the international business market system. Budgetary controls are used to align the various company operating costs with the company’s strategic goals and to either verify goal attainment or to plan corrective action.

Throughout its existence, Walt Disney has implemented many different budgetary controls reaching across numerous and diverse product lines.

With the motion picture production division, production budgets were used to limit expenses for the cost of materials and equipment, talented actors, various support staff, and the marketing and placement of movies into circulation. As Walt Disney expanded its business to include multiple elaborate theme parks, a capital budget was created to establish a threshold on the cost of real estate, buildings and equipment, and the operating and maintenance costs.

When the company decided to venture into the production of toys and clothing, the management designed and implemented a sales budget to manage the increased cost of entering a new market. With the budgetary controls in place, Walt Disney has managed to keep operating costs at an acceptable level and experienced remarkable success in the entertainment industry.

These budgetary controls have given the company the ability to venture into new markets, cross international borders, and bring family entertainment to the world. “Its filmed entertainment units have been riding high on a string of box office successes and its theme parks continue to draw millions of visitors each year.” (The Walt Disney Company, 2008). Along with the use of budgets, companies universally use various financial statements to put into practice financial controls.

The Walt Disney Company’s main financial objective is to be able to generate revenue through growth and long-term shareholder values. The segments of which the Disney Company is categorized are studio entertainment, parks and resorts, media networks and consumer products. Each segment generates a different percent of the organizations profit. 42% of Disney’s income is through media networking and expends 55% operating the resource. 30% is earned from parks and resorts, while it takes 22% to operate the resource. Studio and entertainment earn 21% of Walt Disney’s revenue; however, 15% is used to operate this resource and lastly 7% is earned form consumer products and 8% is used to control this expense (Disney, 2008).

The Disney Company resources are very effective to maintaining and operation of the business; however, some of the resources are costing more to operate than producing income. Therefore, the decision to keep maintaining the resources that are costing more to operate are costly for business. Planning for the future of the Walt Disney Company is a continuous process; the company strives to be the leader of the entertainment world through imaginative entertainment. Disney’s financial success is due to their efficient leaders who also employ talented individuals to help increase profitability through the company’s mission, values and goal planning.

Overseeing The Walt Disney Organization is a major responsibility for Disney’s Board of Directors. Responsibilities are extensive, including the overseeing of the company’s systems of internal control, including compliance of financial reports, implementing policy and procedures, along with adhering to the applicable laws. According to the Disney (2007)… The Committee shall have responsibility for overseeing that management has implemented an effective system of internal control to promote the reliability of financial and operating information and compliance, including those related to risk management, ethics and conflicts of interest.

The Committee plans periodical evaluations to discuss with management any audit findings, including management recommendations for improvement in a particular area in order to promote internal control. Having an effective internal control is extremely important in any organization, especially The Walt Disney Organization, because of the magnitude of its organization. Internal control of management audits are designed to provide reasonable assurance that goals are being achieved in all organizational areas, including effectiveness and efficiencies of operations, reliable and accurate financial reporting, and that all laws are in compliance.

Bureaucratic control is a necessary tool used by large corporations. The Walt Disney Company is not an exception to when it comes to using bureaucracy to control the corporation. Bateman and Snell (2007) define bureaucratic control as “the use of rules, regulations, and authority to guide performance. When a person thinks of Walt Disney, the first things that may come to mind are creativity and risk taking. Walt Disney has released groundbreaking movies that are time consuming to make and have large budgets. A risk is taken every time a movie is created. The risk is that there may not be a market for the product. Walt Disney uses bureaucratic control to insure that all business units are working towards performance standards set by the leaders of the corporation.

Bureaucratic control can have a stifling effect on the creativity of the persons working under the system.

Based on the research presented through compare and contrast one can conclude that the four control mechanisms selected: (1) budgetary, (2) financial, (3) management audit, and (4) bureaucratic each has had a profound and positive impact on the Walt Disney Company’s success from different aspects of the organization. Each of the four selected control mechanisms has impacted the four functions of management to different degrees. Planning was impacted mainly by ever changing budget, finance and management audit controls depending on the cost of production materials, equipment, staff and so forth.

Organizing was impacted by each of the four controls based on the initial planning process for each division; hence, when strategic plans were altered by these control mechanisms organizing was altered accordingly. Leading was mainly impacted by management audit and bureaucratic controls through the company’s internal and external evaluations when leadership decisions lead the company in a different and more productive direction. Lastly, controlling was impacted by each of the four control mechanisms based on internal and external evaluations that lead to the implementation of each control mechanism. 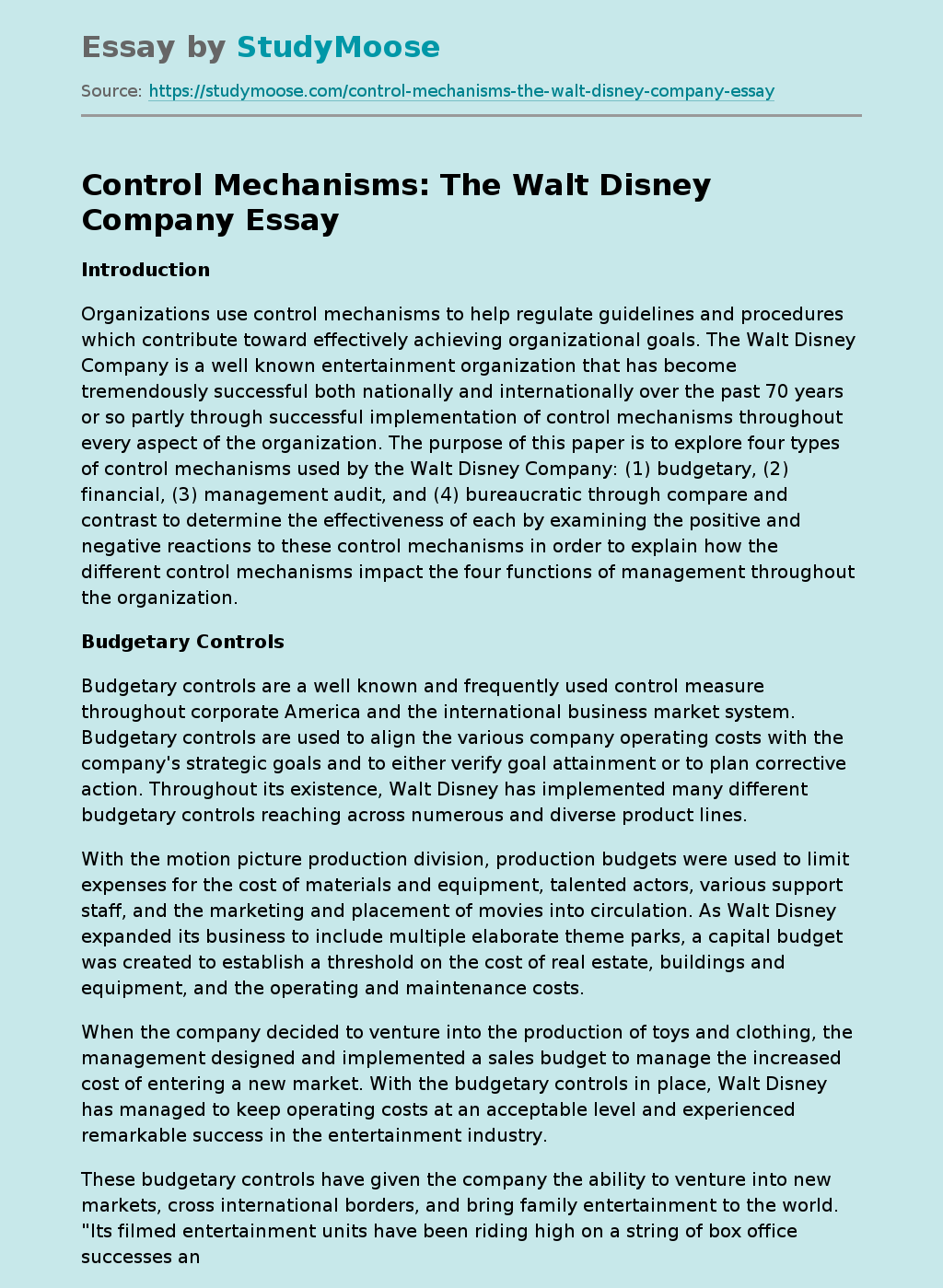