The Walt Disney Company started in October 16, 1926. It was at the time known as The Disney Brothers Studio. It was established by Roy and Walt Disney. The company rapidly began to expand and introduced the world to Mickey and Minnie Mouse. They are the image of the Disney Company. During the 1940’s Disney issued its first stock, this made it growth as a company. The Disney Company expanded to the world of television and written entertainment with the opening of a theme park.

Don't use plagiarized sources. Get your custom essay on
“ The Walt Disney Company ”
Get custom paper
NEW! smart matching with writer

Disneyland was opened on July 17, 1955. Walt dream was to open different theme parks in a big area. He chose Florida because of the nice weather; the inexpensive land; and the interstate 4. Unfortunate, Walt Disney, died on December 15, 1966. Despite the loss of Walt, Disney Company continued to grow. And in October of 1971, Walt Disney World Resort opened in Orlando, Florida. (Disney History)

Globalization and technology changes have impacted The Walt Disney Company in positive way. According to Strategic Management, “globalization is the increasing economic interdependence among countries and their organizations as reflected in the flow of goods and services, financial capital and knowledge across country borders.

” ( Hitt, Ireland & Hoskisson, 2013). Globalization also increases the amount of ideas, technology, people, and capital that are transferred from one country to another. Globalization is also called Americanization because the expansion of American companies such as Pepsi, Disney, NBA, Burger King, etc. Globalization is expanding through the Internet, satellites, and other types of technology. Globalization can increase efficiency and be a force of positive change socially (Evans, 2002).

The Disney Company had started its global expansion in Tokyo. In the 1990’s Disney initiated a European expansion, it established a European headquarters in France and its theme parks of Euro Disney.

Disney changed little to nothing when entering the international market. The French place great value on their language and culture and due to this the press made the Disney venture out to be one of American cultural imperialism. The French feared that Disney characters would soon overtake the French literary masterpiece characters in the mind of French citizens. Disney made very minor changes upon building Euro Disney, the main language at the park was French and the Disney tales that were based on European fairy tales would have more prominence in the park. This form of globalization links with Americanization: that American companies and culture are starting to take over the globe. Euro Disney has over one million visitors a month. Disney kept its American theme that brought a lot of success one in Europe. Disney brought a theme park to Hong Kong with American themes. Disney made the Hong Kong Park as an opportunity to show Chinese people an American park so they want to travel to America to enjoy the real ones.

When people from mainland China travel to Hong Kong Disneyland; they receive a global experience without visit the U.S. This allows them to experience a very different, free, and individualist atmosphere in contrast to the repressive state in which they live (Fung & Lee, 2009). Technology has played an important role in globalization. Walt Disney was a visionary man who was amazed by technology. In fact, he created an imperium with the utilization of technology. Disney Parks have used technology to create a magical experience for their visitors around the world. It has used the latest inventions in media communications and its famous movies, shows and parades. Globalization and technology have made Disney one of most powerful companies in the whole world. Disney has remained successful and profitable for over ninety years. (Disney History)

Valuable resources can take a variety of forms, including some overlooked by the narrower conceptions of core competence and capabilities. Valuable resources may be intangible, such as brand names or technological know-how. The Walt Disney Company, have its own way to produce a consumer franchise Disney makes from soft toys, to theme parks, to movies. The industrial organization model explains the dominant influence of the external environment on firm’s strategic actions. Disney utilizes the four underlying assumptions of the industrial organization to get above average returns. The first assumption, the external environment in these cases the regulatory bodies, drives the internal. The second assumption, all companies in the media business has access to the same resources; Disney should use these resources and collaborate with other media companies to increase the industry potential. The third assumption, mobile resources, and that any company with resource differences will be short lived. Disney could relate this to employees, and making sure that their most highly skilled employees do not move to the competition. Disney has its own University. They also pay for their employees’ education, the fourth assumption, the motivation of profit maximization should help Disney achieve above average returns by making correct assumptions that the competition is rational and will be competitive decisions will be influenced by maximizing each firm’s profits.

The five forces model of competition is an analytical tool used to help firms with this task. ( Hitt, Ireland & Hoskisson, 2013). Disney follows the I/O model steps: It studies the external environment, especially the industry environment. It locates an industry with high potential for above- average returns. It identifies the strategy called for by the attractive industry to earn above-average returns. It develops or acquires assets and skills needed to implement the strategy .And finally; it uses the ﬁrm’s strengths to implement the strategy. ( Hitt, Ireland & Hoskisson, 2013). The resource-based model is formed by resources and capability that the company poses. Resources are inputs into a firm’s production process, such as capital equipment, the skills of individual employees, patents, finances, and talented managers. In general, a firm’s resources are classified into three categories: physical, human, and organizational capital. A capability is the capacity for a set of resources to perform a task or an activity in an integrative manner. ( Hitt, Ireland & Hoskisson, 2013).

The Mission Statement and the Vision Statement of a company go together. The vision provides the company with a plan for the future so the mission statement outlines the company’s current business and purpose. The mission statement is the defining role for the company’s current business and purpose and an effective vision statement should align with venture growth of a company as measured by sales, profit, employment, and net worth. “The Mission of the Walt Disney Company is to be one of the world’s leading producers and providers of entertainment and information. Using our portfolio of brands to differentiate our content, services and consumer products, we seek to develop the most creative, innovative and profitable entertainment experiences and related products in the world”.(ask.com/question/what-is-Disney-s-mission-statement) He was referring to the Disney Company’s three-pronged approach of combining research of the market to find out how to best please its clients, considering who its clients are and making sure that all cultures are represented, and a long history of pleasing its patrons, the “Disney Way,” which has been effective for over fifty years.

In other words, Disney combines research, client culture and preferences, and expertise to assure that the company fulfills the Disney Mission Statement, a statement that defines the Disney Company’s plan for today. A company’s Vision Statement defines an organization’s future goals. An effective vision statement has seven essential characteristics. One characteristic is brevity. The statement should be between 11 and 22 words and directly point to a central goal, one that clients and employees can easily remember within a few minutes.

Effective visions are challenging, inspiring employees to strive to reach a high, yet attainable goal, usually of national or international status for the company. A clear vision projects its goals into the future, and is stable. In other words, vision statements do not shift or change in the face of market trends or passing whims. The most effective visions inspire staff to set high goals and reach for these goals. The most effective visions affect both staff and the public.” The Walt Disney Company vision statement is precisely what they have been doing for almost a century: ‘to make people happy.’ Most people who’ve been to Disney world can attest to the truth of this statement. Disney serves as an example of commitment to other peoples’ happiness.” (http://www.ask.com/question/walt-disney-vision-statement)

Stakeholder is a party that has an interest in an enterprise or project. The primary stakeholders in a typical corporation are its investors, employees, customers and suppliers. However, modern theory goes beyond this conventional notion to embrace additional stakeholders such as the community, government and trade associations. The primary goal of a corporate enterprise from the viewpoint of its shareholders is to maximize profits and enhance shareholder value. Since labor costs are a critical input cost for most companies, an enterprise may seek to keep these costs under tight control. This may have the effect of making another important group of stakeholders, its employees, unhappy. The most efficient companies successfully manage the self-interests and expectations of its stakeholders. (investopedia.com/terms/s/stakeholder) With Corporate Responsibilities, Disney Company takes a broad view of potential stakeholders which can affect, or be affected by the company. This includes employees, consumers, communities, shareholders, distributors, licensees, suppliers, contract workers, retailers, nonprofit and nongovernmental organizations, media and governmental organizations.

In conclusion, most people think about Disney and relate it to magical, exciting and large attractions parks and hotels, and the famous Mickey Mouse. However, they missed to see how big and influential this organization really is. Walt Disney Company is one of the World largest communications organizations. It is everywhere in our lives, from TV, radio and movies, to parks, clothing, accessories and toys. Owning diverse media markets, Disney have built a tradition of culture and niche by efficiently managing its markets and products, allocating them among different cultures, age groups and preferences. In this report I will be analyzing some of the major managerial decisions within the Company, its influences over the market and the way it has established across the years in our culture. 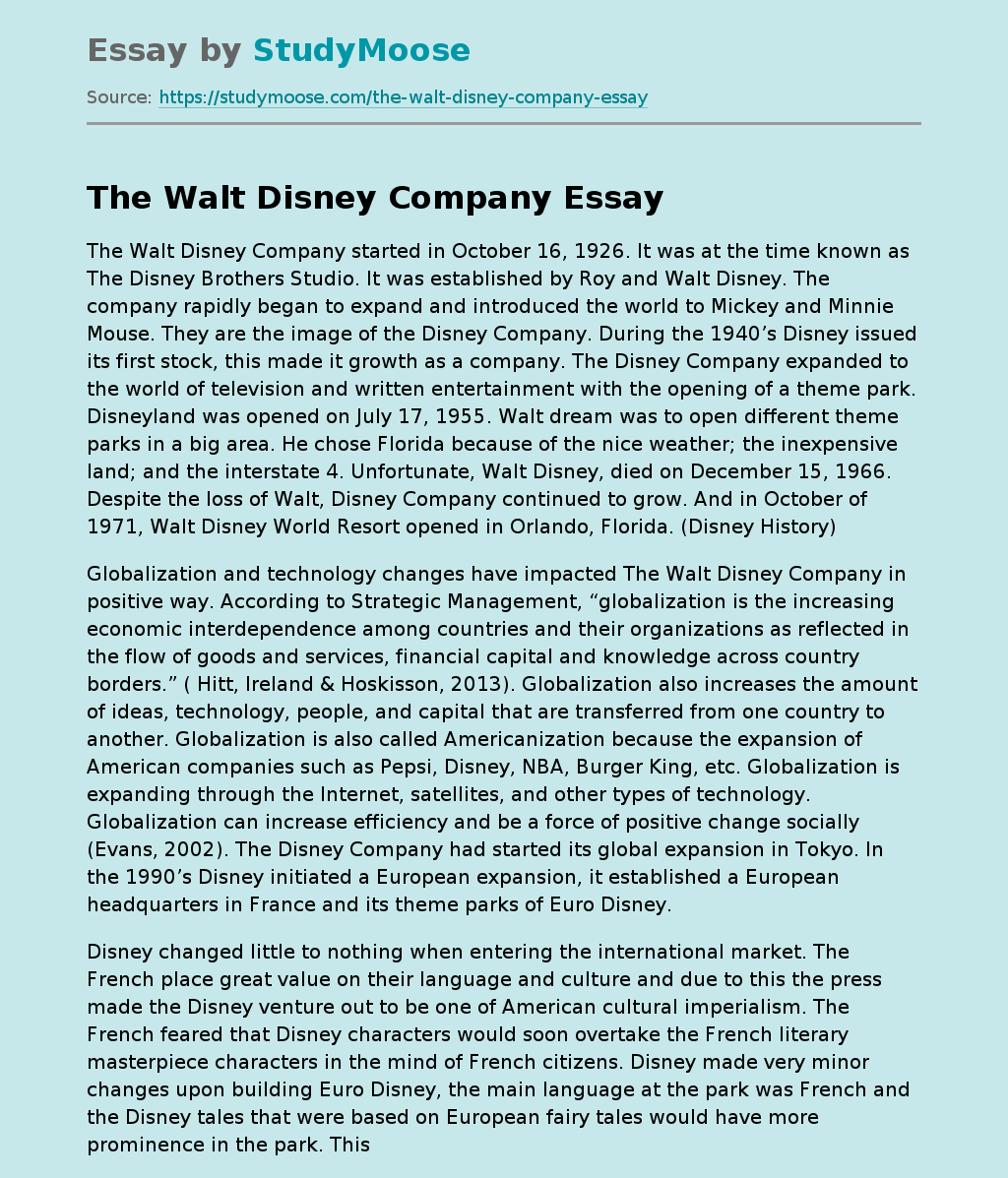