Dr. Ellis English 1101 19 October 2011 A Dream Come True It was a sunny clear morning in Orlando, Florida. The sun, shaped like a fresh Florida orange, was like a guiding light to our destination. The kids were in the back trying to hold in the excitement, but it seemed to be coming through their pores. The freshly polished Chevy Tahoe could not move fast enough down the last stretch of the road. Soon we began to see colorful oversized signs, and we knew that we were not far from Walt Disney World.

As we drove a little further, we could see the sign everyone wants to see at least once in their life; WALT DISNEY WORLD-Where Dreams Come True. My brother, Rashad and I were like five year old kids again. Our eyes were as big as beach balls; however, the kids were in the backseat talking each other’s heads off. Once we parked, everyone exited and began to stretch their limbs, because we knew we had a full day ahead of us.

After everyone was done stretching, we made our way to registration. We were greeted by people dressed in clothing from the nineteenth century.

The lobby had golden oversized chandeliers and right outside the lobby was a clear picturesque river. Once we were done with registration, we headed to our cozy little home away from home which was known as Alligator Bayou. The resort we were staying at was a depiction of New Orleans, Louisiana. It felt as though we were the only people there.

As we settled into our rooms, I took a few minutes to take in every detail of the room. The bedpost looked like fresh cut tree limbs. The bed was perfectly made with a towel figure of Mickey Mouse neatly placed.

We sat down and tried to overcome the excitement but we were ready to get out and about. Our first stop of the day would be the infamous Epcot. We began out short walk to the buses that would take up to our first adventure. Once on the bus I could hear and see all the overly excited children including mine. Everyone was talking about which park they were going to first or which ride or attraction they were going to visit. As we were pulling up to Epcot everyone’s jaw dropped as a big white earth shaped figure came into view. This jaw dropping figure turned out to be a attraction called Spaceship Earth.

Anytime I think of Epcot, Spaceship Earth always comes to mind because it is the focal point of the park. Once inside, the first thing I noticed was that the bushes were shaped like Disney characters; there was Minnie and Mickey Mouse, Donald Duck, Goofy, Aladdin, Beauty and the Beast, and The Lion King just to name a few. Epcot also let us view different countries of the world. We got a chance to visit Italy, Japan, Morocco, Norway, and the United Kingdom. We also had a chance to check out some of the latest technology, and some technology that has yet to come.

Once we hit the major attractions we decided to take it in for the evening, and the next day would hold a lot more surprises. The next morning we woke up to the bright Florida sun. The destination for this day was the one the kids had been asking about since we arrived. The Magic Kingdom was the adventure for that day. It is the place a kid dreams of visiting. So we got ourselves together and again made the short brisk walk to the buses. Once on the bus we discovered that we would have to change our source of transportation. When we got off the bus we had to board the amtrak that would take us to the Magic Kingdom.

After about five minutes we could see a big shiny building with tall points at the top coming into view. Once a little bit closer I could make out exactly what it was, it was Cinderella’s castle. As I informed the children they were overflowing with excitement. Once off the train, we made our way into Magic Kingdom. Walking up all you could see was the beautiful picturesque castle. Our first stop was Prince Charming’s Regal Carrousel. Even thought it was a ride we could find at any theme park, it felt like a dream. The next attraction on the list was The Magic Carpets of Aladdin.

It was purple with golden trimmings and large oversized spitting camels. It felt as though we were a hundred feet in the air. Other attractions that caught our eye was; Snow White’s Scary Adventure, Hall of Presidents, Jungle Cruise, Pirates of the Caribbean, and Splash Mountain. The best part of the day was the parade on Main Street. There were characters from different Disney movies and lots of crowd participation with the dancers. Once were all done there we decided to keep the excitement of the day going. We decided to go the Animal Kingdom.

We found our way back to the amtrak and made our way over to the Animal Kingdom. Once inside I was a little skeptical about it because it seemed like an other Wild Adventures but I began to see a huge difference. The big difference was the enormous tree that was in front of me. This tree I came to learn was call the Tree of Life. The Tree of Life is the focal point of this park and has very deep detail and tells a story. The kids really enjoyed the Conservation station. There we met knowledgeable animal handlers, and got to see lots of the animals up close and personal.

We also learned about veterinary care, research and food preparation that are part of the daily activities at Disney’s Animal Kingdom. The next stop was the Wildlife Express train. The train took us through the entire park and we had a firsthand look at the different animals around the world. After a long day, we returned to the resort where we got a bite to eat and relaxed around the pool. The next morning we rose early to depart this magical place to return to reality. We packed our things and loaded them into the freshly polished Chevy Tahoe and took off toward the sun, shaped like a fresh Florida orange, and headed back to South Georgia. 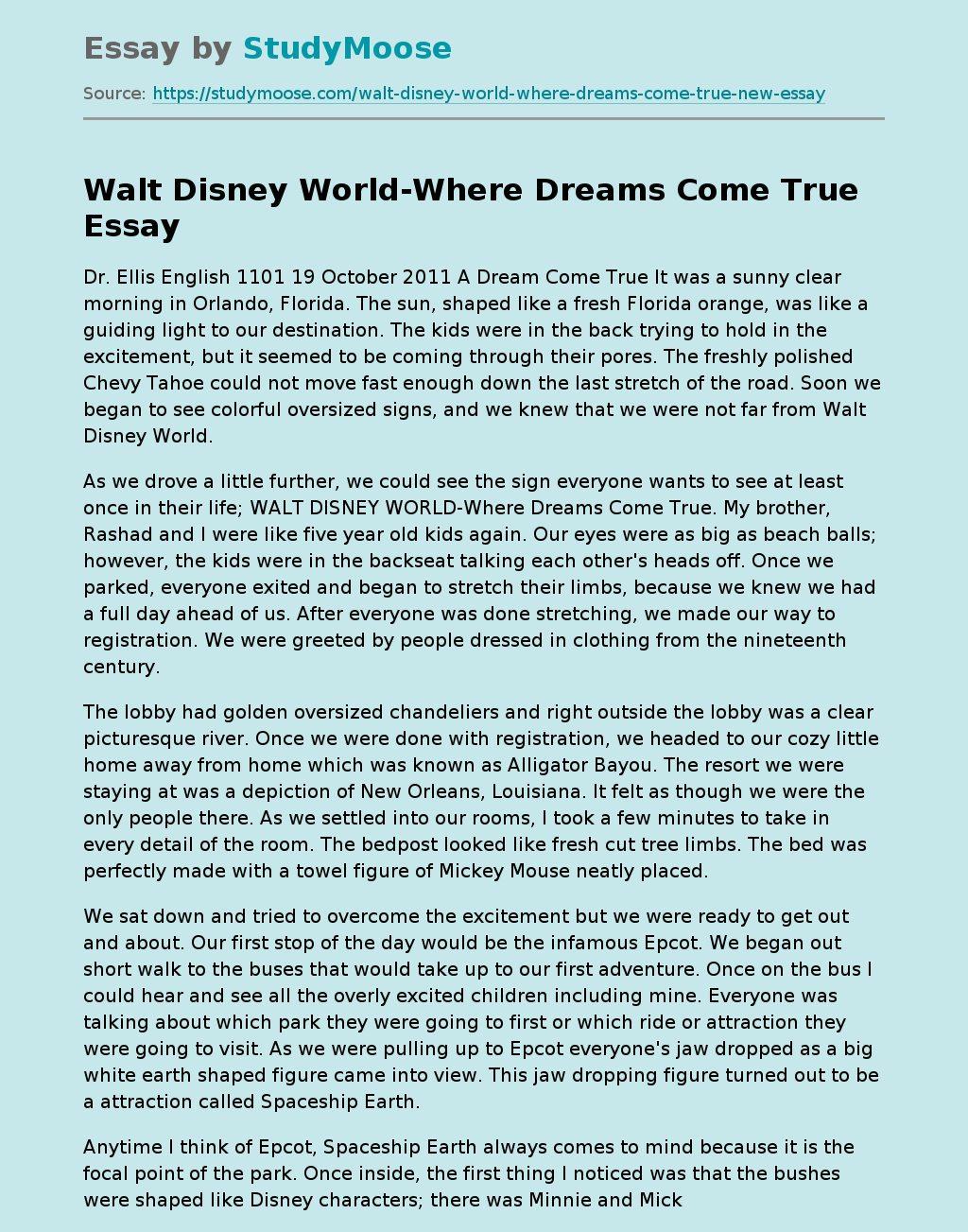