Walt Disney, an American leisure and entertainment company, receives royalty payment from Tokyo Disneyland every year. The royalties were denominated in yen and were constantly growing and becoming significant for the company (8 billion Yen in 1984, with 10-20% projected growth). However, the depreciation of the yen against the dollar could incur the risk of devaluation on the royalties to be received, indicating that Walt Disney should perform hedging.

Different solutions are available. First is to (1) buy options to sell yens for dollars or to buy dollars with yen.

However this option existed only for maturities of two years or less, which is much less than the time scale of 10 years that Walt Disney was considering. Same issue also applies for the second solution, (2) the future contracts which would allow the company to exchange yen for dollar at a pre-defined rate. Also this issue would still persist if Walt Disney would like to (3) convert its existing dollar debt into yen liability since its Eurodollar note issues matured in one to four years and an attractive rate is hard to find.

Moreover this option does not provide any additional cash. The fourth option of (4) FX forward contracts from the bank which could provide long-dated FX forward rate would limit the company’s future credit capacity since the bank would consider these contracts as a part of their total exposure. (5) The Eurodollar debt has long maturity as well, but the company’s current debt ratio is already too high, and the (6) Euroyen bonds are not possible for this case due to restriction in the form of regulation from Japanese government.

There are two available options for Walt Disney, (7) creating a yen liability through loan from a Japanese bank, or (8) an ECU/yen swap proposed by Goldman Sachs. After calculating the IRR of each option, we came to the conclusion that the swap has a lower IRR; therefore Walt Disney should go for this option.

WALT DISNEY AND ITS PROBLEMS

Walt Disney was founded in 1938 as successor to the Walt and Roy Disney Company. Headquartered in Burbank, California Walt Disney had a wide range of activities including theme parks (Disneyland, Walt Disney World), motion pictures, television programs and The Disney Channel, but also some peripheral activities including developing resort and home communities, commercial and industrial properties, as well as educational material and teaching aids. The company also licensed its name to various consumer products companies.

In 1983, Tokyo Disneyland was opened, run by an unrelated Japanese company, paying royalties to Walt Disney Productions. By 1984 the royalties had increased significantly to JPY 8 billion. The royalties were denominated in yen and the director of finance at business, Rolf Anderson, expected these royalties to grow by another 10-20% for the coming years. However the depreciation of the yen against the dollar could incur high risks for Walt Disney, which should be hedged. In exhibit 4 of the case it can be seen how the yen/dollar rate has increased from 225.7 to 250.8 from 1980 till mid-1985. In the following sections we are providing an analysis of possible solutions for hedging the risks stemming from the fluctuation of the yen against the dollar.

If we take the exchange rate of 1984 i.e. 237.30 JPY/USD (see Case, p8) the revenue of Disney (8 billion yen) was equal to approximately 33.7 million USD. This represented around 11.6% of the Disney’s total operating revenue of the year 1984. The growing revenue and the depreciating yen can hinder some of the financial plans of Disney and hence it was important for Mr. Anderson to hedge this risk of foreign exchange. Mentioned below are the different options that were available for Mr. Anderson to hedge this risk.

First solution that the company could have used is to buy/sell options. But the problem Mr. Anderson faced for this was the short-term nature of this solution. Indeed, such options existed with at best a maturity of two years, which was not good enough for the timescale he was considering (10 years horizon).

The Future Contracts option, which would permit the Walt Disney Company to exchange Yens against Dollars at a pre-defined rate (and would protect them from the on-going depreciation), is apparently the same issue: it is impossible to find contracts with maturities of more than two years.

The Walt Disney Company could have entered a foreign currency swap as they did last year by trying to convert part of their dollar debt into a yen liability. This type of hedge was short-term since Disney’s Eurodollar note issues matured in one to four years. The problem regarding such hedging was first it was very difficult to find attractive yen swap rates for such maturities (one to four years), and secondly it would not provide any additional cash to Disney, which is something Mr. Anderson was looking for.

That short-term issue could have been dealt with FX forward contracts. Unfortunately, the banks would consider these contracts as a part of their total exposure to Disney, and it would compromise Walt Disney’s capacity to have credits in the near future. Their debt indeed, has already increased drastically in the last two years and they would not like to lever it more.

Disney could have thought of Eurodollar debt issue (whose maturity is long enough), which could be swapped into yen. But because the debt ratio of company was too high it was not a viable option for Mr Anderson. Euroyen bonds were also out of question since the current Japanese Ministry of Finance guidelines didn’t allow Disney to do so (see Case, p5, §2).

The first viable option in front of Disney was to create a yen liability through a term loan from a Japanese bank at the lower Japanese long-term interest rate. This option was attractive, as the proceeds obtained from this could have been used to settle their short-term debt, improving their debt structure by decreasing the leverage. Mentioned below were the terms of the loan.

It was a loan with a principle of JPY 15 billion, the term of the loan was 10 years with interest rate of 7.5% (annual percentage rate) paid semi-annually. It also had 0.75% front-end fees and was a bullet loan where semi-annual interest payments are done and the principle is paid at the maturity. So if we deduct the fees from the loan amount that Disney asked for they would be left with 14.8875 (15%-0.75% of 15) billion JPY. Also the interest Disney had to pay each time equalled (7.5% of 15 billion = 1.125 billion JPY annually) 0.5625 Billion JPY semi-annually. If we calculate the IRR (internal rate of return) or basically the all in cost (AIC) of the debt: 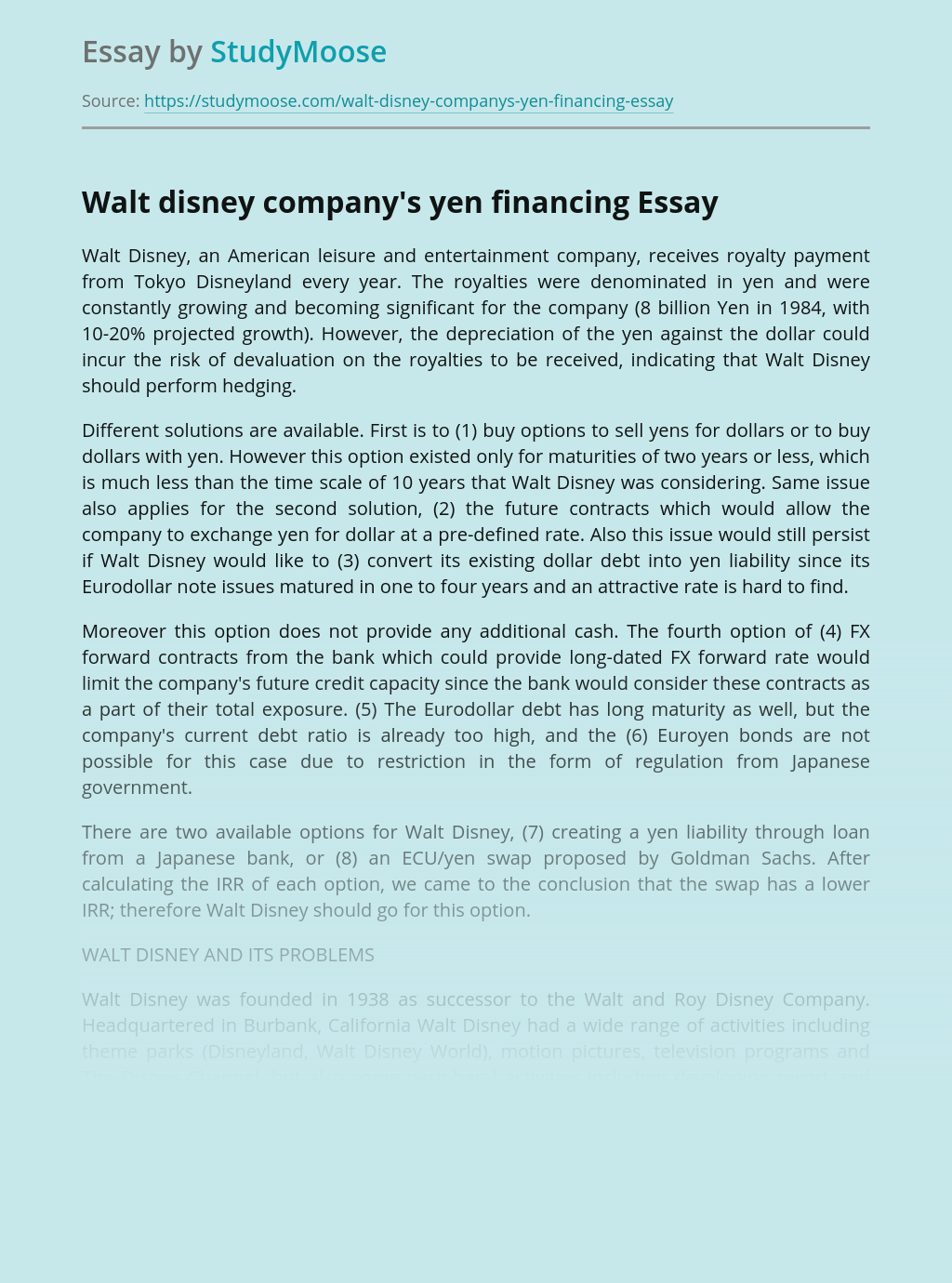