The most persuasive and intriguing aspect of an author’s stylistic choices are within the schemes, tropes, diction and syntax. Adeline Yen Mah, author of Chinese Cinderella, paints an authentic picture of her childhood in twentieth-century China; Mah’s childhood, fraught with painful memories and bad luck, accentuates her strength and courage and ultimate triumph over despair. Mah’s stylistic choices and appeal to pathos aggrandizes the overall effectiveness of her book, Chinese Cinderella.

A worldwide bestseller that has been translated into eighteen different languages, Chinese Cinderella has a wide, varied audience.

The style and effectiveness are heavily dependent on the writer’s diction; Mah carefully chooses words that convey the quiet tragicness of her situation and the cultural aspect. One of the most predominant aspect of the Chinese culture is the names- Mah could write about her grandmother, grandmother and stepmother, but instead chose instead to write about her Ye Ye, Nai Nai and Niang.

Choosing to write using the Chinese words creates a compelling, permeating story: “Besides Father and Niang, we lived without Grandfather Ye Ye, Grandmother Nai Nai and Aunt Baba in a big house in the French concession of Tianjin, a port city on the northeast coast of China” (Mah 5).

Removing the names disturbs the authenticity of the piece and upsets the overall meaning; so much of the story is derived from the culture and time period. Culture is a significant element in the writing, but Adeline Yen Mah’s personal experience is the most essential aspect.

Mah begins as a young Chinese girl growing up in Shanghai.

Mah utilizes syntax to convey the juvenile tone; simply constructed sentences create a childish perspective while maintaining an intelligent insight: “Next day, there was a grand funeral. Nai Nai’s coffin was draped with white sheets and placed on a hearse pulled by four men. We all dressed in white robes with white headbands for the boys and white ribbons for the girls” (Mah 20). While describing scenes and occasions so simply may seem less interesting, the simple, clean sentences actually paint a clear image in one’s mind. The strong, clean sentences keep the story from seeming too pitiful- Mah does not need verbiage to write well.

If excessively descriptive, long sentences are employed the effectiveness of the writing would decrease, “Later, I saw Big Sister and Niang walking toward the balcony and talking privately just before she and Samuel left for their honeymoon. Was she able to explain it all away? I hoped so. I only wished I could have helped her more” (Mah 89). Straightforward observations create an innocent perspective. Verbiage would hinder her child-like persona- if she writes to sound like the settled, distinguished writer and doctor she is, her novel, in which she is a young Chinese girl, would be considerably less qualified.

Through the syntax and diction, Mah appeals to her most compelling appeal, emotion. Her story is tragic- an unloved daughter, Mah suffers cosmic misfortune after cosmic misfortune. Syntax provides the youthful insight, diction provides the cultural aspect, and Mah’s life provides the emotionally evocative story, “Though a fascinating variation on the classic Cinderella story, with a monstrously hateful villain and a smart, plucky heroine, the book is also rife with simplistic caricatures and shallow melodrama. Yet the daily contempt Yen Mah encountered as a child often touches the heart” (Cruz).

Mah eloquently details the tragic events of her past, and as a result, appeals to pathos strongly throughout the entire book. Mah’s stylistic choices and appeal to pathos aggrandizes the overall effectiveness of her book, Chinese Cinderella. The appeal to pathos is the greatest weapon in Mah’s arsenal, and she uses diction and syntax as her bullets. Strong, simple sentences and poignant, culturally related diction “Verges on soap-opera theatrics, Yen Mah remains true to her sympathetic nature” (Cruz). The elegance and skill of Mah are evident in her writing. 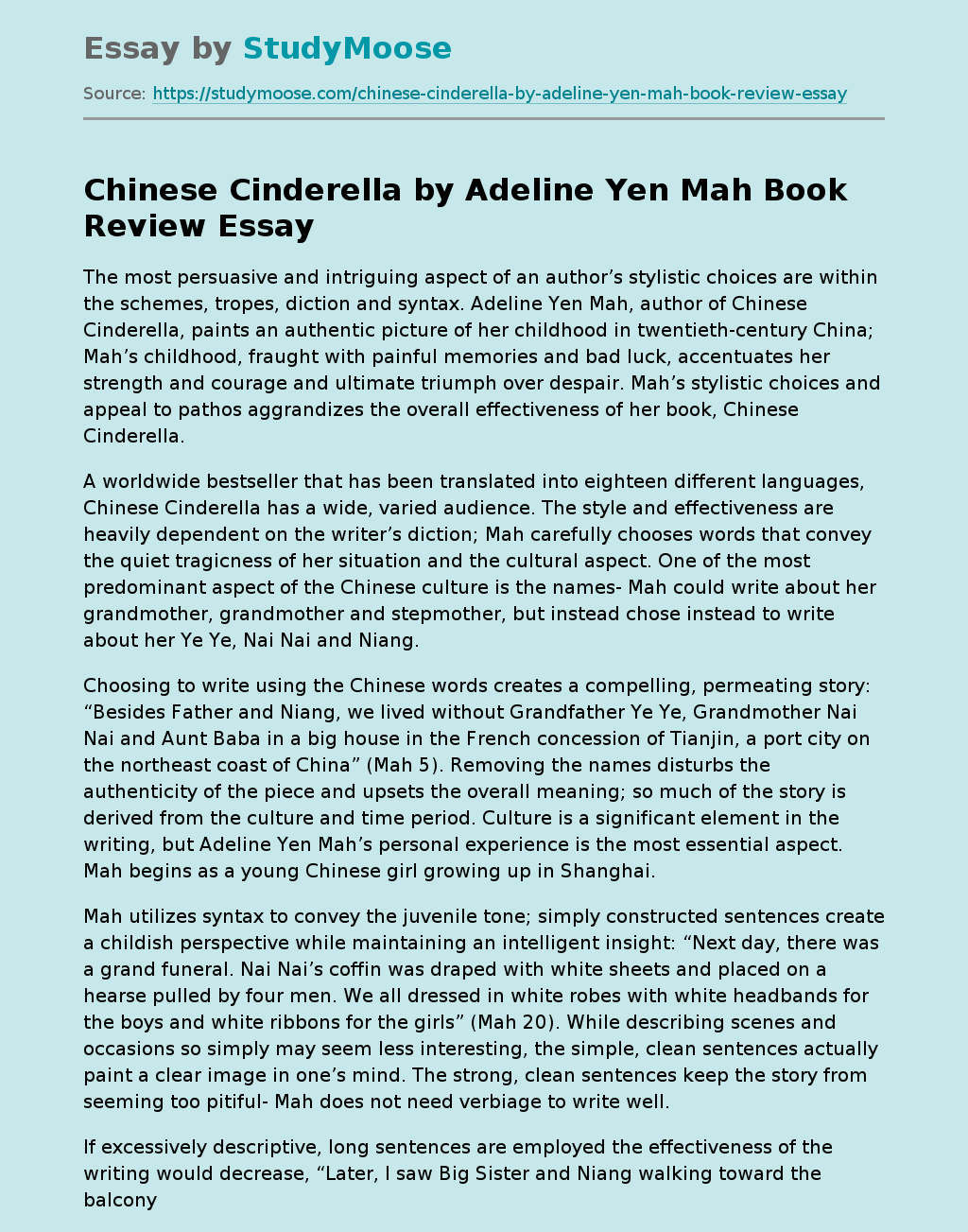