To Kill a Mockingbird: Importance of Shooting of Tim Johnson in the Novel

How Does Lee Make the Shooting of Tim Johnson Such a Tense and Exciting Moment in the Novel? At the beginning of Chapter 10 Jem and Scout are embarrassed of Atticus as he is atypical to the other men of Maycomb. Lee writes ‘our Father didn’t do anything. He worked in an office’. Here she is establishing that Scout is ashamed as Atticus is opposite to the Fathers of Scout’s contemporaries. Lee emphasizes Scout’s remorse towards Atticus for wearing glasses, by writing, ‘besides that he wore glasses.

Don't use plagiarized sources. Get your custom essay on
“ To Kill a Mockingbird: Importance of Shooting of Tim Johnson in the Novel ”
Get custom paper
NEW! smart matching with writer

He was nearly blind in his left eye. ’ However, this is ironic, showing Scout’s naivety as Atticus has great moral courage. Lee introduces the situation of the mad dog, Tim Johnson descriptively. The opening sentence ‘Tim Johnson was advancing at a snail’s pace, but he was not playing or sniffing at foliage’, first uses a metaphor to create a sense of slow movement, and the fact that he was not ‘playing or sniffing at foliage’ suggests that Tim Johnson is behaving abnormally for a dog, which arouses the readers curiosity.

Lee’s description ‘he seemed dedicated to one course and motivated by an invisible force’ includes the words ‘dedicated’ and ‘motivated’ which builds up and sense of anticipation. The simile ‘We could see him shiver like a horse shedding flies’ indicates that Tim Johnson was moving in an irregular twitching motion and was very sick. The long, complex sentences of the introduction build suspense. Lee foreshadows the climax of the event through Heck Tate’s comment, ‘He’s far from dead, Jem, hasn’t got started yet.

’ The fact that the mad dog is very much alive and his death is not anticipated yet creates a feeling of trepidation.

The phrase ‘what remained of his poor mind made him pause’ elicits some sympathy for Tim Johnson as he has been involuntarily overrun by disease, but also illustrates to the reader that the dog is harmful as he is not acting out of choice and the rabies are getting the better of him. When Heck hands a rifle to Atticus, Jem and Scout react with extreme shock by nearly fainting which also shocks the reader. This is because Atticus is not fond of guns and disapproves of fighting, so the children are taken by surprise when Heck asks their Father to shoot with a gun.

The dialogue between Atticus and Heck ‘Don’t just stand there, Heck! ’, ‘For God’s sake, Mr Finch, look where he is! ’ includes quick statements to increase pace and exclamation marks to increase urgency. The repeated shifting between characters creates imagery for the readers in a cinematic style and creates tension. As well as this, the urgent dialogue juxtaposed with the slow pace of Tim Johnson conveys peril ahead. The sentence ‘Mr Tate almost threw the rifle at Atticus’ creates tension about Atticus’ decision.

Lee follows up by writing ‘In a fog, Jem and I watched our Father’ which is opened with ‘in a fog’ to show Jem and Scout’s clouded judgement about their Father and misbelief. The simile ‘I thought he moved like an underwater swimmer: time had slowed to a nauseating crawl’ is used to dramatic effect to delay the pace before the climatic events. Leading to the climax, Lee writes ‘Atticus pushed his glasses to his forehead; they slipped down and he dropped them in the street’ using repetition, with a listing of verbs; ‘pushed’, ‘slipped’, ‘dropped’ which builds anxiety and tension as to how the event will conclude.

Referring to Tim Johnson, the short sentence ‘We saw his body go rigid’ increases pace and creates an alarming image. Lee’s sentence ‘movements so swift they seemed simultaneous’ uses sibilance for dramatic effect. Another short sentence ‘the rifle cracked’ engages the senses with onomatopoeia. Lee concludes with ‘he didn’t know what hit him’ a sudden ending, as this decision and final act was not expected of Atticus, given Scout’s earlier review of him. The conclusion seems rather abrupt and unexpected of Atticus as Lee writes Scout’s embarrassed presumption about her father; ‘Atticus was feeble’.

Additionally, Lee wrote earlier ‘he was nearly blind in his left eye’ regarding Atticus, which furthers our surprise as Atticus managed to kill Tim Johnson in a single shot without his glasses. Lee displays here that Atticus contrasts with the stereotypical characters of Maycomb as he is reluctant to use guns. He does not display brazen, reckless courage like that of a typical Southern man. Lee wants the reader to see that moral courage is more important and harder to achieve than physical courage.

To Kill a Mockingbird: Importance of Shooting of Tim Johnson in the Novel. (2016, Dec 07). Retrieved from http://studymoose.com/to-kill-a-mockingbird-importance-of-shooting-of-tim-johnson-in-the-novel-essay 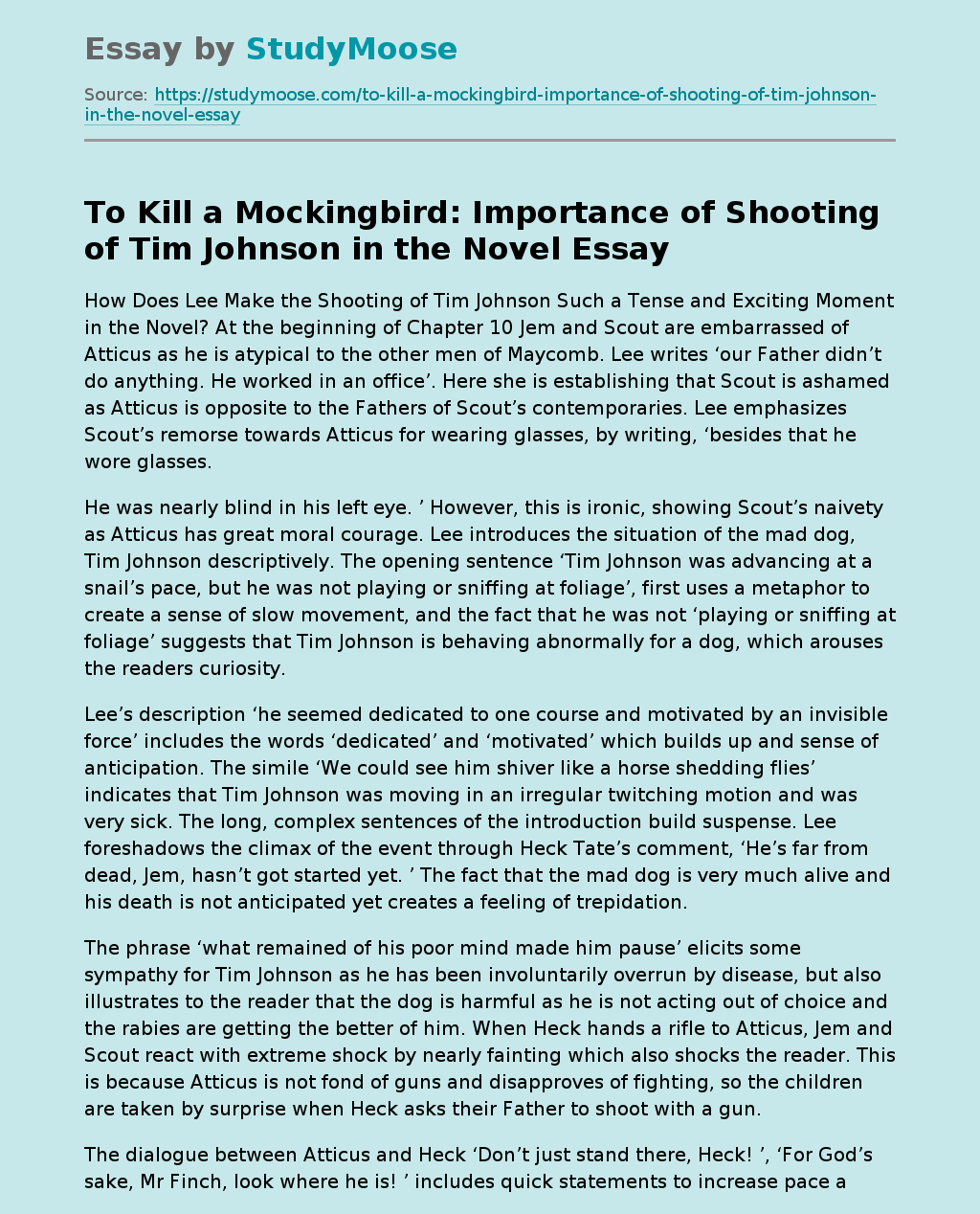