Corporate Social Responsibility (CSR) is defined as the voluntary activities undertaken by a company to operate in an economic, social and environmentally sustainable manner. When companies operate in an economically, socially and environmentally responsible manner, and they do so transparently, it helps them succeed, in particular through encouraging shared value and social license. Management and mitigation of social and environmental risk factors are increasingly important for business success abroad, as the costs to companies of losing that social license, both in terms of share price and the bottom line, may be significant.

Don't use plagiarized sources. Get your custom essay on
“ Johnson and Johnson Business Ethics ”
Get custom paper
NEW! smart matching with writer

JOHNSON & JOHNSON is a good example of a company that follows CSR. In 1982, Johnson & Johnson’s Tylenol medication commanded 35 per cent of the US over-the-counter analgesic market – representing something like 15 per cent of the company’s profits. Unfortunately, at that point one individual succeeded in lacing the drug with cyanide. Seven people died as a result, and a widespread panic ensued about how widespread the contamination might be.

By the end of the episode, everyone knew that Tylenol was associated with the scare. The company’s market value fell by $1bn as a result. When the same situation happened in 1986, the company had learned its lessons well. It acted quickly – ordering that Tylenol should be recalled from every outlet – not just those in the state where it had been tampered with. Not only that, but the company decided the product would not be re-established on the shelves until something had been done to provide better product protection.

As a result, Johnson & Johnson developed the tamperproof packaging that would make it much more difficult for a similar incident to occur in future. The cost was a high one. In addition to the impact on the company’s share price when the crisis first hit, the lost production and destroyed goods as a result of the recall were considerable. However, the company won praise for its quick and appropriate action. Having sidestepped the position others have found themselves in – of having been slow to act in the face of consumer concern – they achieved the status of consumer champion.

Within five months of the disaster, the company had recovered 70% of its market share for the drug – and the fact this went on to improve over time showed that the company had succeeded in preserving the long term value of the brand. In fact, there is some evidence that it was rewarded by consumers who were so reassured by the steps taken that they switched from other painkillers to Tylenol.

The features that made Johnson & Johnson’s handling of the crisis a success included the following:

Johnson & Johnson published their own form of an “ethics oath” entitled ”Our Credo“, as a way to communicate the mission, vision and accountability that Johnson & Johnson holds itself to for a variety of groups- doctors, nurses, patients, mothers, fathers, employees, those in the communities they operate in, as well as the global community and company stockholders. The Credo was created in 1943 by Robert Wood Johnson, a member of the founding family of the Johnson and Johnson Company. It was created just before the company became a publicly traded entity and long before the term “corporate social responsibility” was used for accountability in the workplace.

On the Johnson and Johnson corporate website, they state that: “Our Credo challenges us to put the needs and well-being of the people we serve first. Our Credo is more than just a moral compass- we believe it’s a recipe for business success. As a key player in the pharmaceutical and healthcare industry, Johnson & Johnson understands the responsibility they have when it comes to providing safe products to their consumers, as the risks tied to faulty products within this industry are particularly sensitive.”

As a refresher, here are some of the benefits of having your employees publicly recite an ethics oath:

Many companies use storytelling and the mission of previous company leaders as a way to inspire employees and get them on board when working towards company goals. In the case of Johnson and Johnson, the importance of “Our Credo” has been evident since conception, and continues to play a signifiacnt role in the company today. When looking at the above benefits that an ethics oath can provide a company, Johnson and Johnson has been able to experience the rewards associated with each of these benefits. The story of Johnson and Johnson’s “Our Credo” is a great example of the positive impact a corporate ethics oath can have on a company. 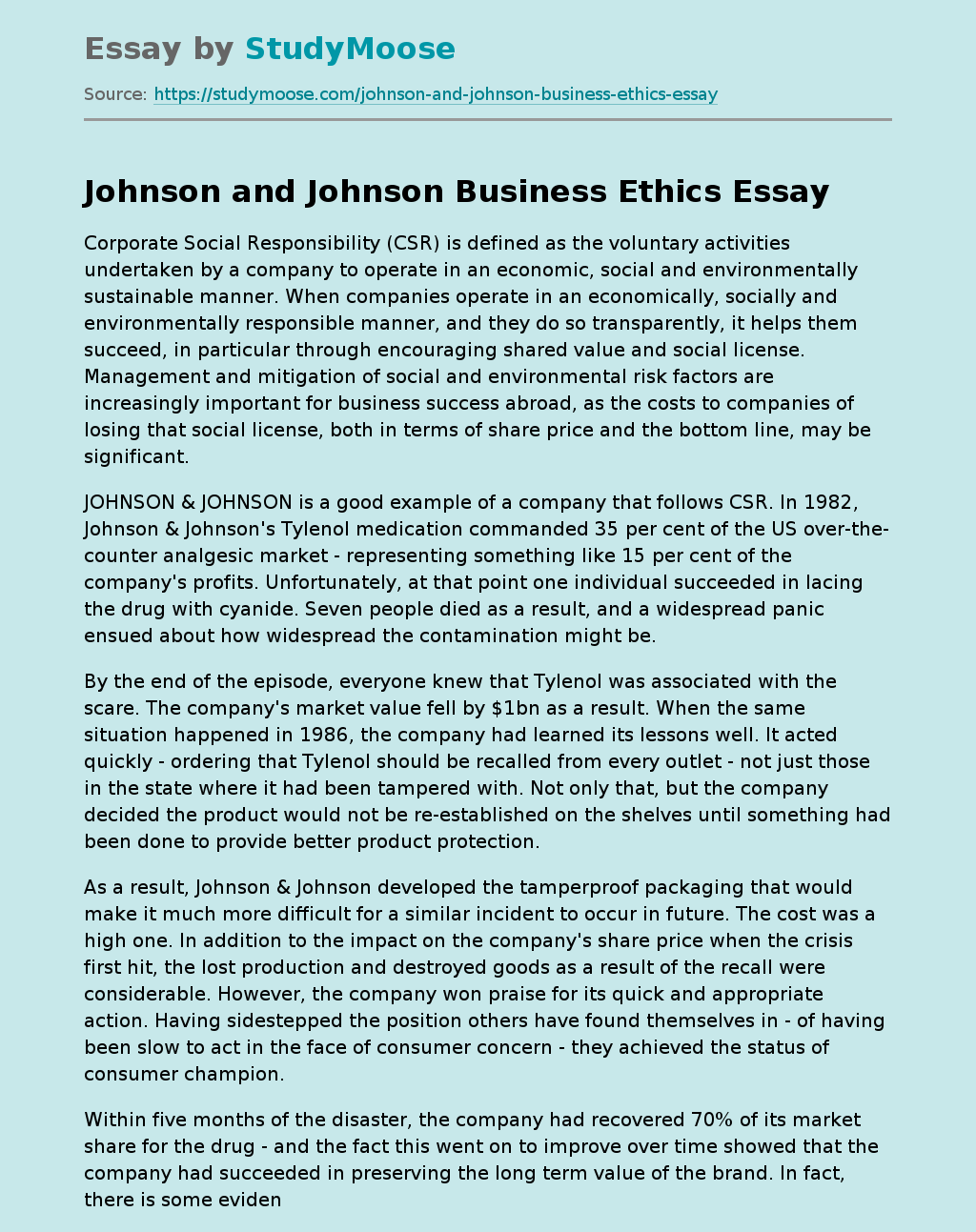