Rightly hailed as a literal and figurative literary giant, Dr. Johnson made major contributions to English prose, poetry, drama, literary criticism and English language. His presence is central to the understanding of the literature of the latter part of the eighteenth century. Giving stability to English language was his major concern and all through his writing career, he worked hard towards this end Dr. Johnson was not the first lexicographer yet, his dictionary stands as a landmark in the realm of English language even today and its reprints are much in demand.

Don't use plagiarized sources.
Get Your Custom Essay on Dr. Johnson’s contributions to English prose, criticism and lexicography Just from $13,9/Page

It is so because Dr. Johnson was the first to make a scientific study of words He studied the meaning and impact of words in isolation as well as in company of other words. He provided modern explanation to the theories of English grammar. He stressed on the need and importance of the art of speaking and writing English. As a lexicographer he was a trendsetter and the influence of his dictionary is clearly visible on the format of the Oxford English dictionary.

Dr Johnson’s “Lives of Poets” was the beginning of a new literary genre of biography known as biographical criticism.

He invented several changes in the style of writing English prose-style wise, grammar and genre wise. He was against the use of metaphors and flowery expressions of earlier era. He pleaded for “Poetry of Sensibility”. He advocated a style of writing in a controlled and measured style. His prose relies heavily on direct, unelaborated expressions. He stood for sonorous harmony and order in sentences. Majestic vocabulary and grand symmetrical sentences characterized his prose style, a style that gave the English language some of the most abiding and popular quotations such as:-

* Politics is the last refuge of the scoundrel * The search for happiness is the chief cause of human unhappiness The flight of human soul is not for one achievement to the other but from one aspiration to the other Such was the power and strength of Dr. Johnson’s prose style that his majestic vocabulary was used with analytical precision. The balance and anti-thesis of the couplet form was brought from poetry to prose. His prose is not compressed. It is expansive like the verse of the Paradise Lost. His style shows syntactic mastery, and grand symmetrical structure.

He adopted periodic sentence designed to arouse interest and curiosity. He takes a moralistic view of life. His writings are often tinged with sardonic humor and satire. He often directed his satire towards himself to educate the reader. His Preface to Shakespeare was an important piece of writing which heralded in a new era of Shakespearean criticism. Literary biography too is a new genre of literature in which the reader gets a chance to know about the authors as to what they wrote and why they wrote.

It started a new biographical branch and a new form of literary criticism. His insights about the nature of literature interweave literature and criticism so that each illuminates and strengthens the other. It was this all round contribution of Dr. Johnson that made him the symbol of such revolutionary changes and innovations as had a far reaching effect on the perennial stream of English language and literature. In his own time his was a towering presence that inspired and encouraged a large number of aspiring writers , poets, playwrights and critics .

in his own time and the same is the case even today. Such was the power and strength of Dr. Johnson’s prose style. His majestic vocabulary was used with analytical precision. The balance and anti-thesis of the couplet form was brought from poetry to prose. His prose is not compressed. It is expansive like the blank verse of the Paradise Lost. Bibliography Alvin Kernan ( 1989) Samuel Johnson and the Impact of Print (Princeton Univ. Press) Bruce Redford, (1994) the Letters of Samuel Johnson (Princeton) J. C. D. Clark (1998) Samuel Johnson (Cambridge Univ. Press) 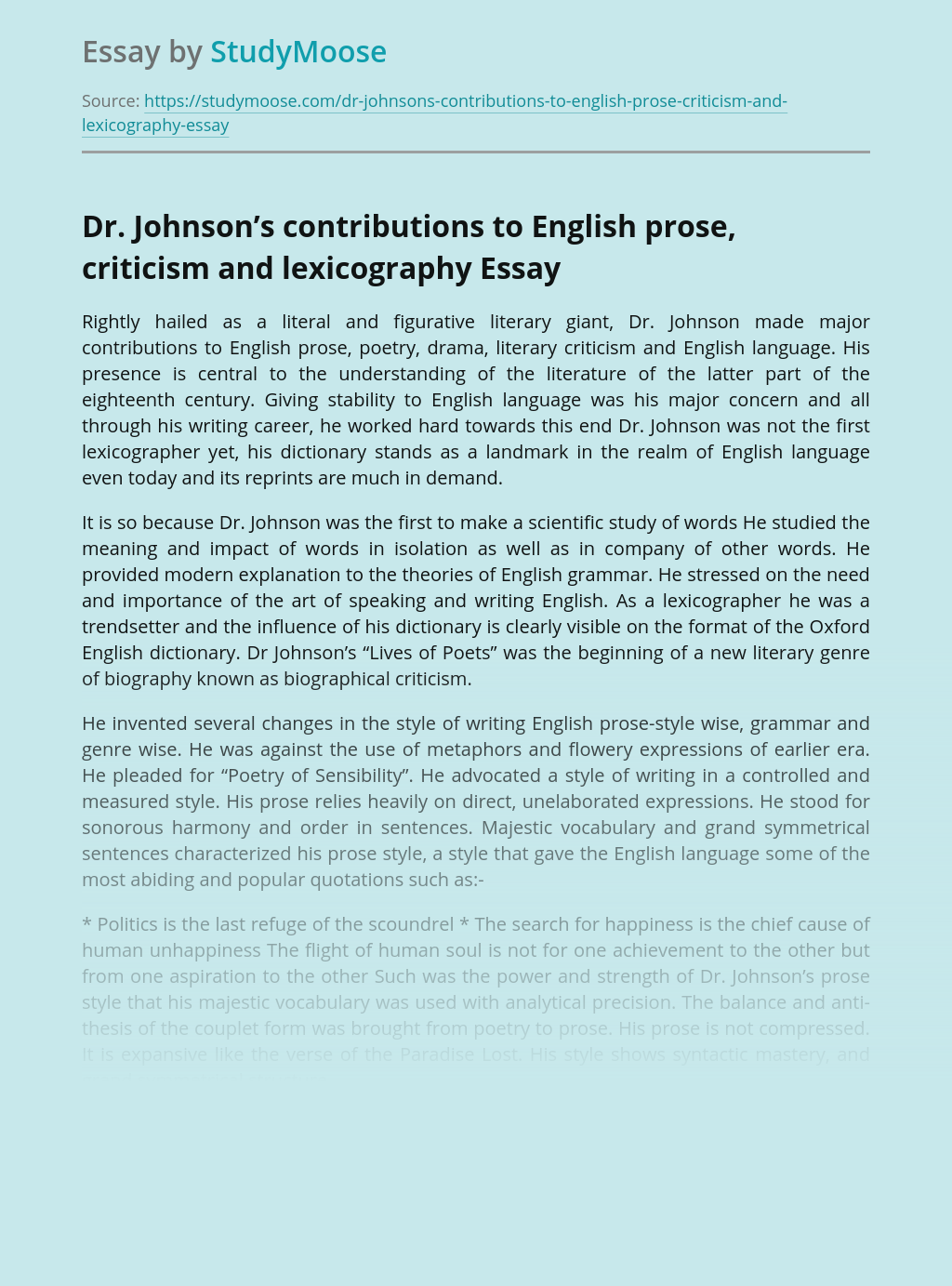 Should Animals be used for experiments?

One of the most discussed subjects of our times is whether we ought to use animals for ex-periments or not. The fascinating point that constantly shows up is what else exists rather of our dear buddies. Without our laboratory animals; our medications, cosmetics and food would not be checked and might not be safe for...

Jackie Elliot is seen as a traditional man with anti feminist views. he sees that boys should be tough whilst girls should be more placid. Throughout the film Billy Elliot, the directer has created the character Jackie Elliot, a widowed father feeling the grief of the recent lose of his wife. This essay suggests that...

View sample
Get Essay
Qualities of a Good Ruler

In history, the primary reason why a country prospers is because of its leader. The very best written piece I have actually stumbled upon on this subject is Niccolo Machiavelli’s book, “The Prince”. A leader should be intelligent, strong, caring and devoted to his topics. Although individuals have various opinions in the qualities of an...

In the mid 1990s, a creative and low cost filmmaking was created – Dogme95. The founder were two Danish directors, Lars von Trier and Thomas Vinterberg. 1 Unlike any other film, it follows different set of rules. Written in Vow of Chastity, a rulebook of Dogme95, it restricts the use of props, sets, lighting, sound,...

View sample
Should students’ textbooks be replaced by notebook computers?