Anglo-Saxon prose is earnestly practical and instructionally religious. Contrasted with Anglo-Saxon poetry, it reveals no originality of thought or of emotion but is remarkably free from its parallelisms, inversions, periphrases, and excessive use of metaphor and epithet. Loose in its compound sentence structure, common in its simple sentence arrangement, if somewhat stiff, it was generally direct and clear, forceful, occasionally rhythmical. Alfred, the Great,(848-901), King of Wessex(871-901), is called the Father of English prose.

To give impetus to the development of English letters and culture at a time when the English social and political life was in utter disarray owing to the Danish invasions, Alfred began a series of translations from Latin works.

Turn in your highest-quality paper
Get a qualified writer to help you with
“ Anglo-Saxon Prose ”
Get high-quality paper
NEW! AI matching with writers

In this he was assisted by Bishop Asser of Sherbourne. These translations include Pope Gregory’s Cura Pastoralis (“Pastoral Care”) which defends Alfred’s use of the vernacular; Historia Universalis (“History of the World”) by Orosius, intended by the author to refute the view that the sack of Rome in 410 A.

D. was provoked by the wrath of the Pagan gods at the triumph of Christianity, and virtually made into a new book by Alfred who condensed the original and also added original matter like geographical details about Germany and reports of sea-farers like Ohthere; Bede’s Ecclesiastical History of the English People-an over-literal translation in which un-English constructions are not infrequent; The Consolations of Philosophy by Boethius. The central doctrine of the work sets forth the problem of Fate and Free Will.

Alfred’s translation is somewhat free but is his most important work, which propels the lofty thoughts of the original by vivid figures of speech.

Alfred took liberties with his translations, condensing the material or expanding it by interpolating original matter. While his language is occasionally long and involved, it is, on the whole, simple, direct, and non-ornamental. While he brought a considerable Latin element into English language, he is said to have founded English prose.

The famous Anglo-Saxon Chronicle was begun before Alfred’s time as casual jottings made by monks, but eventually became a systematic register of national events, and the plan for this is generally ascribed to Alfred. Four versions of the Chronicle are preserved in seven manuscripts, the latest bringing the English history down to 1154. These versions testify to the continuity of English prose from the Old English to the Middle English period. The entries are mostly dry and bare, but occasionally become picturesque and spirited. The greatest writer of the Anglo-Saxon period was Aelfric(c.

955-c. 022), Abbot of Eynsham. Among his many works are Lives of the Saints, sermons in alliterative rhythms, A Testimony of Antiquity(a homily against transubstantiation), an Old English version of Heptateuch, and the famous Homilae Catholicae, some eighty “Catholic sermons” on Church events, doctrines, and history. In these sermons his exposition is direct, the style flowing, picturesque and fervent. Aelfric’s ordinary prose is lucid, fluent, marked by repetition of words for emphasis, rhythmic balances and some alliterations intended to emphasize the dominant concepts.

The other Major writer of English prose of the period was Wulfstan, Bishop of York from 1002 to 1023. His works include Canons for Edgar, meant for the Secular clergy, and Institutes of Polity, detailing the duties of the different classes of people in the society of his time. From literary point of view, however, his most important work was Sermo Lupi ad Anglos(Sermon to the English People) which presents different aspects of the Christian faith, and castigates wickedness and moral slackness.

His prose style is oratorical, marked by the use of favourite tags, alliterative and rhyming pairs of words, rhetorical questions, mass of strong words, absence of concrete illustrations, etc. Other varieties of prose in Old English include a martyrology, descriptive of saints and great festivals of the church year, two collections of homilies for the edification of the Christians-the Blickling Homilies and the Vercelli Homilies, and medical writings like the Anglo-Saxon Herbal, Bald’s Leechbook, a medley of recipes, and Byrhtferth’s Manual, a treatise on natural phenomena and science.

Towards the end of the Anglo-Saxon period prose of entertainment also bagan to appear. Examples of this are English versions of the Graeco-Roman romances, Apollonius of Tyre, full of strange adventure and source of Shakespeare’s play Pericles, The Wonders of the East, and The Letter of Alexander to Aristotle, the latter describing the marvellous things the hero sees on his campaigns. Thus, already in Old English period we have the beginning of interest in matters which were used fully in later medieval romances. 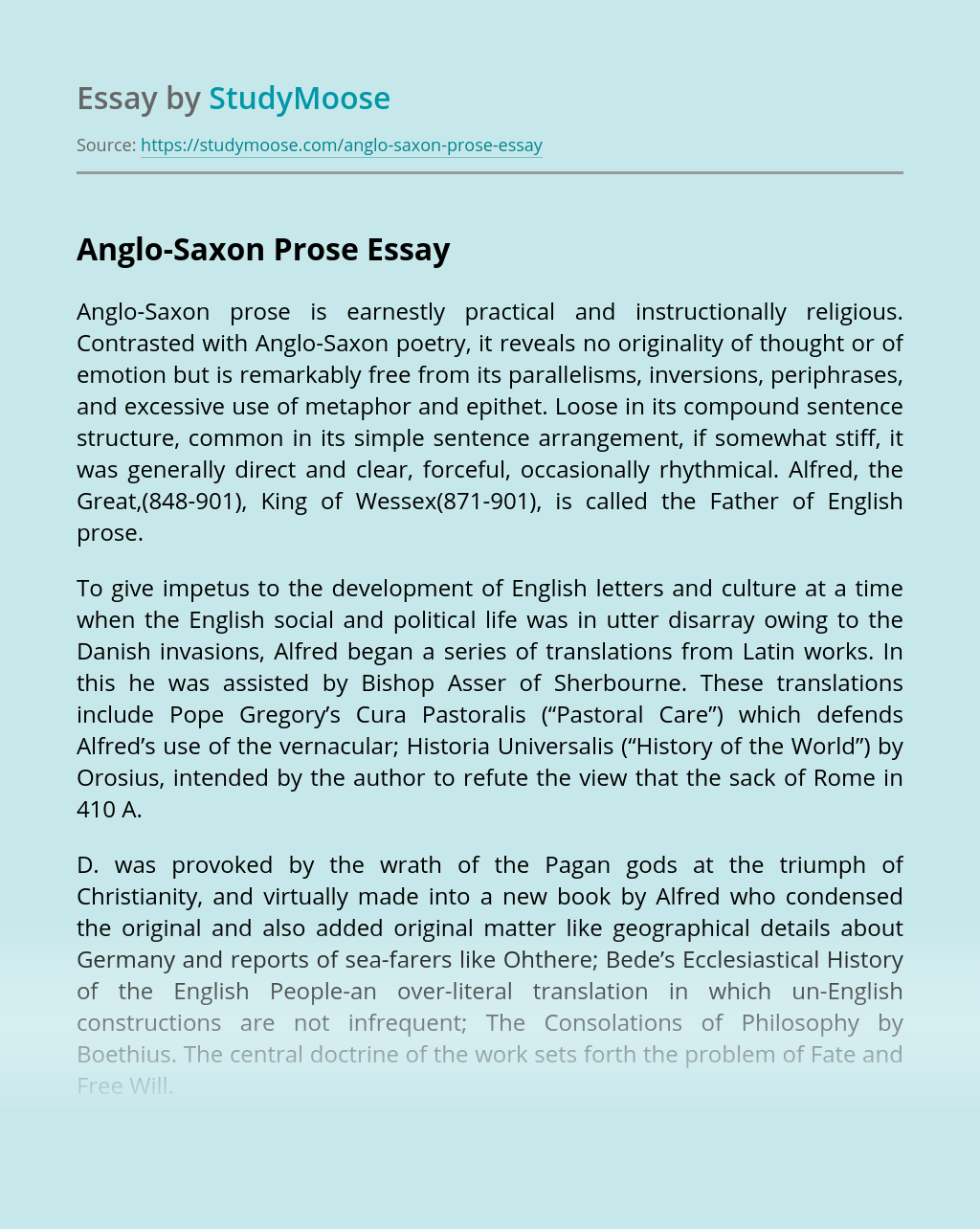 Turn in your highest-quality paper
Get a qualified writer to help you with
“ Anglo-Saxon Prose ”
Get high-quality paper
Helping students since 2015
Stay Safe, Stay Original