The Wife’s Lament is a poem that is well known as an Anglo Saxon elegy, although to this day, it is still challenged by some scholars to be, in fact, a riddle. The Wife’s Lament is an elegy that tells the story of a female narrator mourning for her husband, and she is reflecting on her great loss. The poem shares the same characteristics with those of an elegy, which include the passing of time, pain, exile, separation and longing.

This Anglo Saxon poem has also been characterized as a riddle, where the narrator displays an element of mystery in her writing.

Most Anglo-Saxon elegies are monologues spoken by an unidentified character that appears to be cut off from human society as well as the comforts of home and friendship, and are consistent with the tone of longing and reminiscing for what was lost. In The Wife’s Lament, the dominant theme is the narrator lamenting for her lost or absent lover.

She is reminiscing about the better life she had once known compared to the present life she is barely tolerating.

“… I have had to suffer since I first grew up, Present and past, but never more than now –” (The Wife’s Lament, lines 3-4). Throughout the poem, we the reader are experiencing the narrator’s ache of absence and longing. Her husband has left her, for reasons unknown, but the wife supposes he too is wishing for the better life they had once shared. “And all too often he will come to mind A happier dwelling.

Grief must always be For him who yearning longs for his beloved –” (The Wife’s Lament, lines 53-55).

Stanley B. Greenfield, a well-known literary scholar, believes the Old English elegy to be defined as “a relatively short reflective or dramatic poem embodying a contrasting pattern of loss and consolation, ostensibly based upon a specific personal experience or observation, and expressing an attitude towards that experience” (Klees, Research Paper). The narrator experiences the pattern of loss when she is separated from her lover, but she receives no consolation. “The Wife holds on to love –her love for her husband and the remembrance of his love for her –and finds no consolation” (Cavill Paul, Heather Ward, 36-38).

She can’t give up her love, but also cannot resolve the issue with her lover’s kinsmen, so she is simply left to wait for him in exile, imprisoned in a dreary cave. Anglo-Saxon elegies are also known for their vivid imagery. There are the desolate landscapes, the coldness of winter, ruined or abandoned structures, violent storms at sea and darkness (Two Old English Elegies from the Exeter Book: The Wanderer and The Ruin, 1-2). After being exiled, the narrator in The Wife’s Lament is forced to live in a cold, dreary, unpleasant place, “… Under the oak-tree, in this earthy barrow. Old is this earth-cave, all I do is yearn.

The dales are dark with high hills up above, Sharp hedge surrounds it, overgrown with briars. And joyless is the place. Full often here The absence my lord comes sharply to me–” (The Wife’s Lament, lines 29-34). The imagery of the old cave, the dark valleys and the tangled mass of prickly plants manifest into physical images for the wife. She has an inward emotional experience of loss, fear and loneliness (Cavill Paul, Heather Ward, 36-38).

The wife’s suffering is further enhanced because her lord is in agony. He too is in a cold, dark, desolate place. “… Since my dear lord Is outcast, far off in a distant land, Frozen by storms beneath a stormy cliff And dwelling in some desolate abode Beside the sea; my weary-hearted lord Must suffer pitiless anxiety –” (The Wife’s Lament, lines 47-52). The poem is condensed with the emotional pattern woven by the woman’s feelings, and through the use of imagery, the Anglo-Saxon elegy displays a consistent tone of sadness, loneliness, grief, longing for the better, and emptiness.

Anglo-Saxon riddles tend to be metaphorical, tense, pithy, usual, and in the case from The Exeter Book, in which The Wife’s Lament appears, they were religious. The Wife’s Lament may in fact be tense and loosely interpreted as religious, but it is not usual or pithy. The poem is complex, with vivid use of imagery and tone, altogether consistent with the characteristics of Anglo-Saxon elegies. The Wife’s Lament is a poem about a wife pining for her lord, who had been separated from her. She had been exiled from society by her lord’s kinsmen, and was sent to live in a cold, dark, earthy cave.

She lost her importance and role in society, as well as her sense of belonging. The wife experiences loneliness through the passing of time, wishing for the life of happiness she had once known. We the reader experience her ache of absence, separation and longing through the vivid use of elegiac imagery. Even though Faye Walker-Pelkey, a literary scholar, points out the poem has “riddle-like flavour” (The Wife’s Lament: Possibly the Most Perfect Anglo Saxon Riddle Ever Written), The Wife’s Lament remains an expressive, complex, and emotional Anglo-Saxon elegy with the consistent tone of longing. 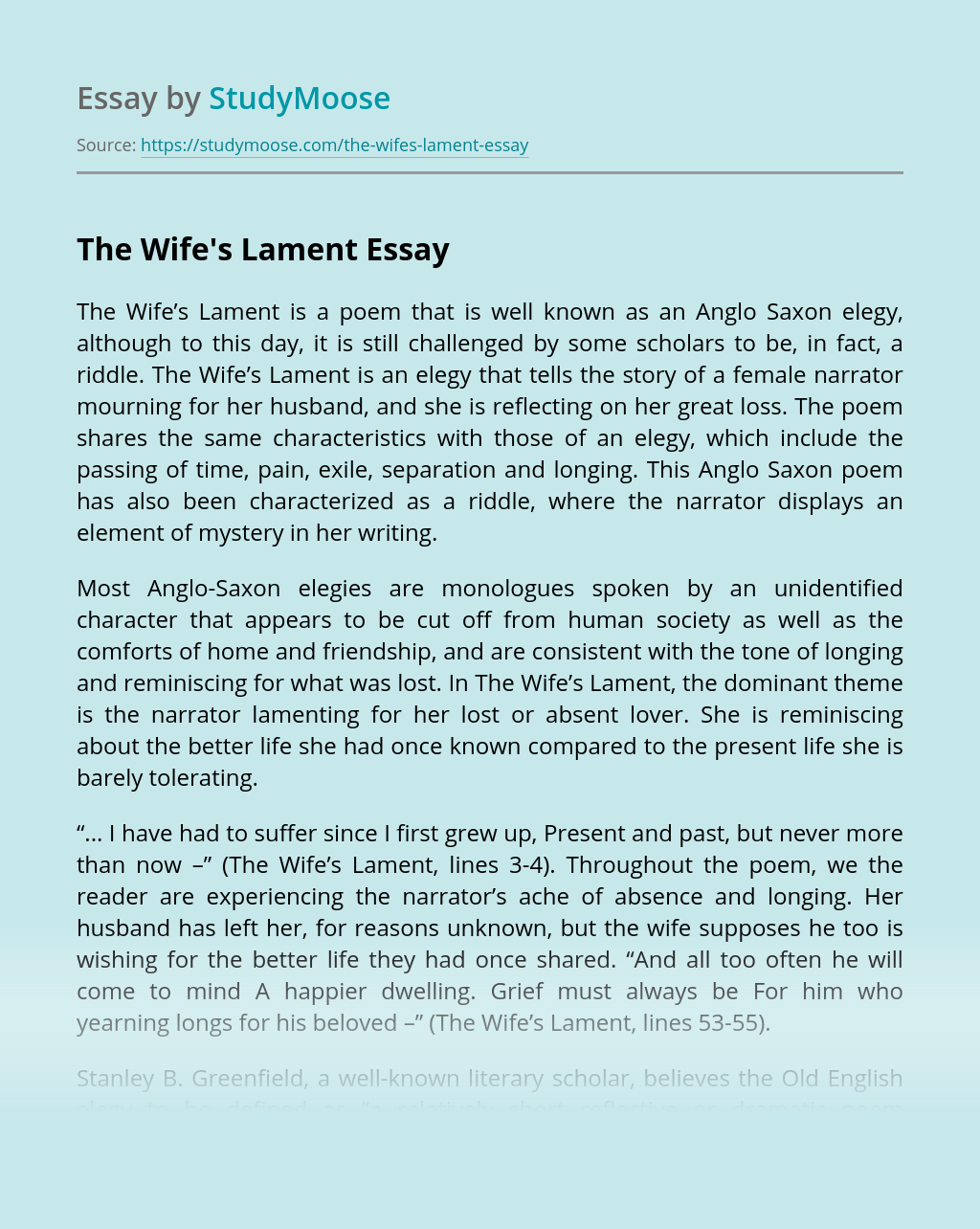