The epic poem of “Beowulf” presents the characteristics of two heroes, Beowulf and Hrothgar. During this Anglo-Saxon time period, Hrothgar rules as the king of his Danish lands. However, this king faces many problems due to the disturbances of a monster known as Grendel. As an Anglo-Saxon warrior of the time, Beowulf hears of this creature and journeys through the hero’s path to kill Grendel. Through this journey, Hrothgar and Beowulf reconstruct the code of conduct of an ideal Anglo-Saxon king and warrior.

Don't use plagiarized sources. Get your custom essay on
“ Ideal Code of Conduct in Poem Beowulf ”
Get custom paper
NEW! smart matching with writer

The Danish lands of the time are ruled by Hrothgar, a respected and generous king. These qualities of character were admired by the people of his time and place. All people of Hrothgar’s kingdom respected this king, and they all accepted his “very word far and wide as a command.” The people also give him great titles such as the “Lord of the Mighty Danes,” “guardian of the Scyldings,” and “protector of warriors.

Much of these people’s respect come in response to Hrothgar’s generosity to everyone. This generosity can be seen towards Beowulf, when the king gives his thanks for the heroic deeds of the warrior. Hrothgar rewards Beowulf with priceless material as he says to the warrior, “You shall lack no earthly riches I can offer you.” The people of the land also trust their king, who holds a strong belief in God. In the scene where Hrothgar celebrates Grendel’s death, he holds the monsters hand as he says, “Let us give thanks at once to God Almighty for this sight.

” The followers of the king both respect and trust their ruler, and through his generosity and strong trust in good, Hrothgar displays the ideal code of conduct for an Anglo-Saxon king. Another epic hero that has qualities that follow the Anglo-Saxon code of conduct is Beowulf.

This warrior, known to be the “strongest man alive,” leaves for a heroic journey when he hears of the evil Grendel. He first shows his strength and bravery when he sets sail to assist Hrothgar in defeating Grendel after hearing news of the creature in his own land. Beowulf is constantly referred to as brave, such as when he defeats Grendel, and Hrothgar must reward him for his heroics. As the “brave man moved forward until he stood immediately before the Danish lord,” Hrothgar says, “I will reward this brave man with treasures.”

The unbeatable strength of Beowulf shows during his confrontation with Grendel, when the monster instantly realizes that “never had he met any man in the regions of earth, in the whole world, with so strong a grip.” The enormous creature, for the first time, meets his match and cannot help but to feel terror and “eager to escape to his lair.” To further understand Beowulf’s power, the author describes of an “immense invincible sword wrought by the giants” that no other human but Beowulf could handle it during battle.

Through his bravery to confront the evil creature and his strength to defeat Grendel, Beowulf creates himself as the bold and powerful warrior that represents that ideal code of conduct for an Anglo-Saxon warrior. Through the hero’s journey in “Beowulf,” characteristics of both Hrothgar and Beowulf can be seen. Hrothgar plays his role as a respected and generous king, while Beowulf is the strong and brave warrior. In displaying these characteristics, both Hrothgar and Beowulf reconstruct the ideal code of conduct for an Anglo-Saxon king and warrior. 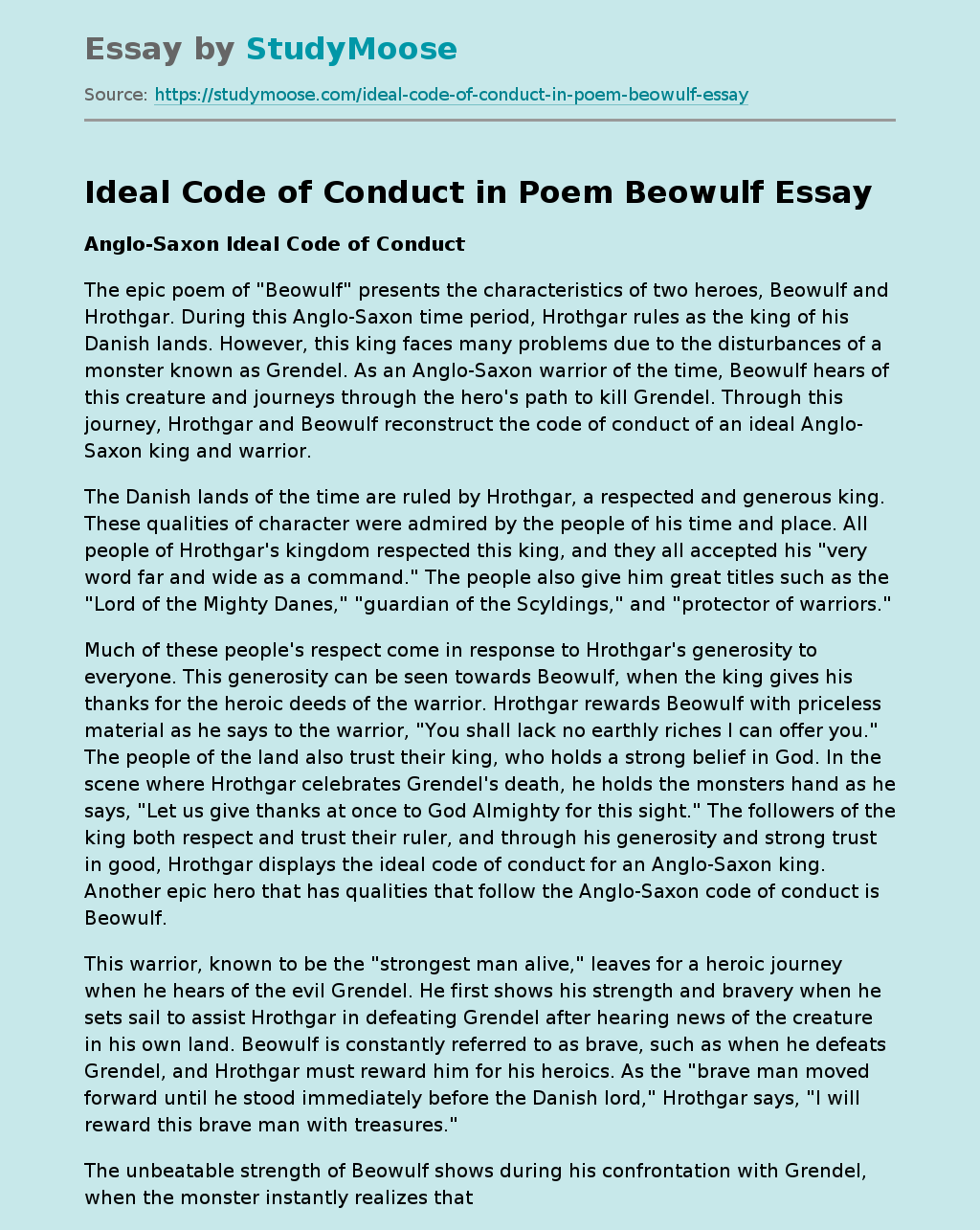