A Code of Conduct is published and disseminated to its employees, and to existing and potential stakeholders such as members of the board of directors, customers, partners, vendors, suppliers, potential employees and the general public. Frequently posted on the organization’s website and in their annual report to shareholders, the Code of Conduct is both an internal commitment to a standard of behavior and beliefs and a public declaration of the organization’s position on a set of standards, values, principles, and beliefs.

Don't use plagiarized sources.
Get Your Custom Essay on Code of conduct Just from $13,9/Page

The Code of Conduct is the heart and soul of a company.

Think of a Code of Conduct as an in depth view of what an organization believes and how the employees of an organization see themselves and their relationship with each other and the rest of the world. The Code of Conduct paints a picture of how employees, customers, partners, and suppliers can expect to be treated as a result. After going through major corporation code of business I decided to write a paper based off of one companies code of business ethics outline.

That company is Amazon. The reason I chose Amazon was how simple there code of conduct in ethics was for how large of a corporation they are. The following are the things I felt could used revision.

The company I found online for code of conduct was Amazon. They had a short and simple code of ethics page. Although short and to the point I feel they left a few things out. Amazon is a company that relies on distribution through vendors and returning customers. I felt that nowhere on this page was there a place that states they hold management or vendors accountable. Owner and upper level management accountability is very import for a company’s code of conduct. These individuals are requires to show honesty, transparency and integrity in their daily rolls. This sets the ethical base for a company, along with it also keeps individual owners and managers accountable for their actions. A unethical manager that is allowed to rein free in a business can create a difficult business situations and over extend a company’s resources.

Another great point I would like to bring up about Amazons ethics code is their ability to institute the code. For a code of conduct to be useful, it is importance to introduce and endorse it at the highest level of business. Once the code is written, The CEO and governing body should sign off on it. Then, the company can incorporate it into training programs. Many companies require staff members to sign a document that they read and understand the code, and others require all employees to abide by the code as conditions of their employment. Many companies also use an internal review to measure the effectiveness of their code. This may be all done internally, but nowhere on the code of conduct was it instructed or announced that they do this.

A code of conduct is developed either by a powerful executive, or often the owner. In amazons case is feel this was a cross section of employees that have executive influence, so it would be easier to incorprate and integrate. It is more likely to affect the actual beleifs and operation of the organization. The code of conduct will most likely acheive full implementation with in the organization when more are involved in the creation. Due to this I feel amazon has missed a few valuable areas in which they can improve on with their revisions for the future with code of conduct and ethics. 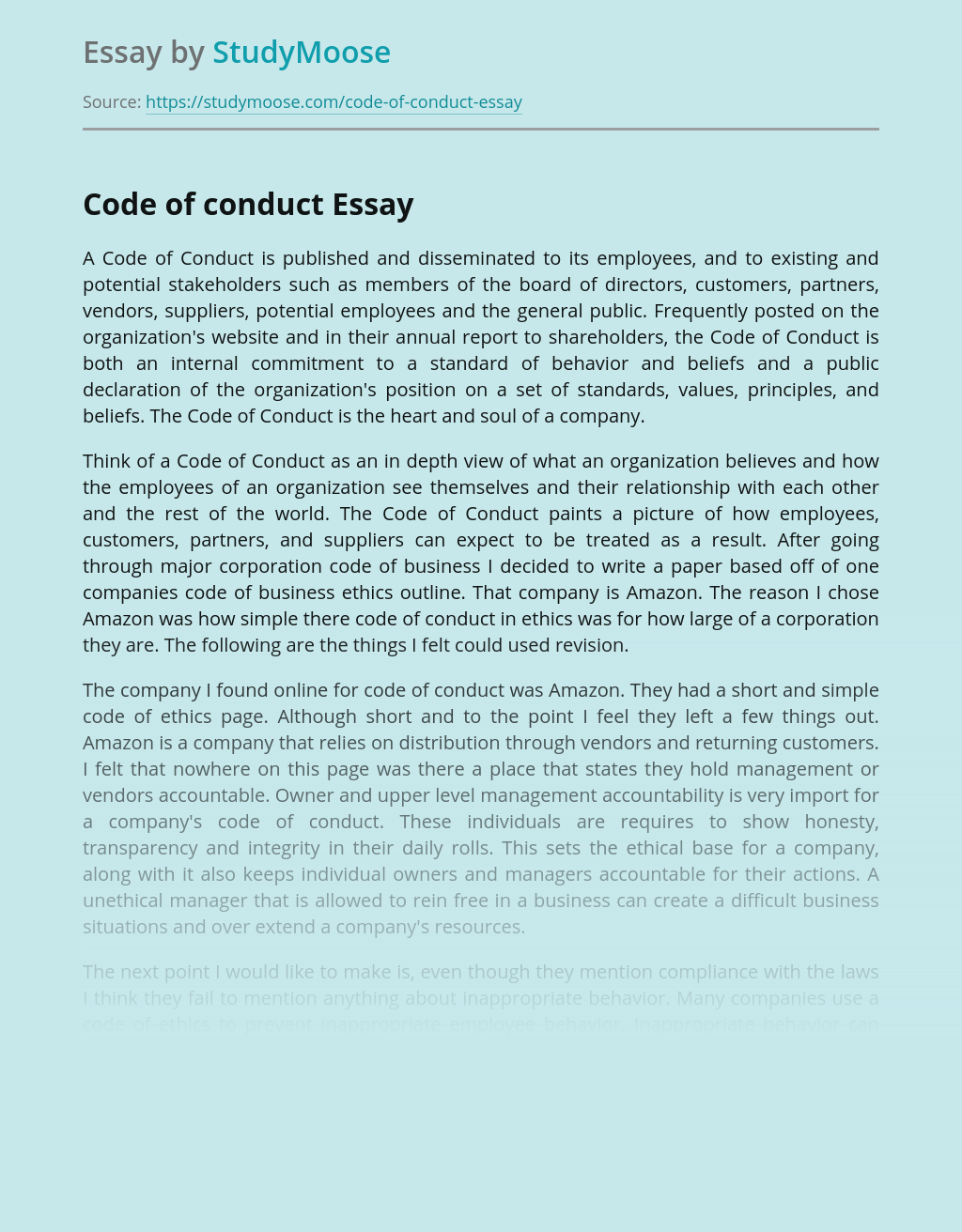 Level 5 Diploma in Leadership for Health and Social

Review the range of groups and individuals whose communication needs must be addressed in own job role. In my role as Team Leader with Deputising Responsibilities, I have a wide variety of people and organizations with whom I must communicate. On a day to day basis I must meet the communication needs of the...

The Role Of Culture In International Business

As globalization continues to thrive trade liberalization has led to the emergence of many businesses across the globe. There are many cultures in the world and the international businesses ought to have a good understanding of them if they are to be successful in the global market place. (Kotter J. and Heskett J, 1992). Culture...

London Business School Essay Topic Analysis 2012-2013With the exception of a few minor wording changes, four of London Business School’s essay topics for the 2012-2013 admissions season have remained essentially the same as last year’s prompts. Meanwhile, the school has reintroduced a career goals essay that was last seen on the 2009-2010 application, in addition...

﻿ ADVANTAGES AND DISADVANTAGES OF ONLINE SHOPPING

Just year before, online shopping was not popular as it is today. But nowadays online shopping is the one of the best method considered for shopping. Now it allows the buyer to buy anything by just a click of mouse. Now online shopping offers a variety of products and services, as it allows us to...

1) What are UPS “wise labels”? What role do they play in UPS operations? Response: UPS “Smart Labels” is a computer system generated shipping label that stores all essential information for shipping of packages from beginning to delivery. It stores the sender details in order to assist in timely and effective delivery of the package....