Speech on Oppressive Governments vs. No Government at All

Hello everyone, my name is Christopher Denq and I am the affirmative side of this debate. I would like to firstly provide two basic definitions relevant to this topic, followed by the value and criterion, then my four contentions, and finally, a conclusion. Firstly, my definitions: “Oppressive” is defined as unjustly inflicting hardship and constraint on a particular group. “More desirable” is defined as “more appropriate, advantageous, or well advised”. Both were defined by New Oxford American Dictionary. Secondly, my value and criterion:

Now, the value of life, which is having goals and reasons to live, has been the focus of many societies in the past.

Don't use plagiarized sources. Get your custom essay on
“ Speech on Oppressive Governments vs. No Government at All ”
Get custom paper
NEW! smart matching with writer

I shall reach this by parts of Hobbes Social Contract theory, specifically his idea of man being innately evil and self-interested. I shall also use his hypothetical state of nature, which is the primitive state where animals, or humans, have a natural right to everything and can do anything they will. Additional examples from history shall also be implemented on the affirmative’s side.

Next are my three contentions: One, oppressive governments are more similar to general governments then no government.

More of a basic definition, this contention serves to provide a foundation on which compare the two sides of the debate. Firstly, oppressive governments simply mean an unfair government. A general government could mean a hypothetical perfect government. Both the duties of these governments are to provide security to the citizens, promote social welfare, and make executive decisions, there is no doubt about it.

Essentially the only difference between the two is that one does it in a slightly worse way. Let’s bring no government into the picture.

The absence of government is a void of such authority, meaning there is no party or group to perform duties. The absence doesn’t protect citizens, it doesn’t give education, or decide to build famous monuments. Therefore, oppressive governments and governments are more closely related. This flows smoothly into my next three contentions. Two, oppressive governments provide the needed security. Before anything is actually discussed, we must look into why security is so important. Psychologically, as supported with Maslow’s (/low) Hierarchy of Need theory, people must give priority to security before anything can be done.

We must first feel safe in order to advance society, construct civilizations, etc. Now, in the absence of government, there is an absence of an overarching, authoritative power: the state of nature is therefore prevalent. During this state, people will fight over resources, disregarding the safety of others and regarding the safety of only themselves. Let me remind you judge that the state of nature is no different from a state of war, which doesn’t sound very appealing. Security is NOT reached in this system. Survival of the fittest becomes our way of life, and we run the human race straight into the ground.

There were those that had access to luxuries such as expensive wines; they had jobs during a massive economic recession. Statistics taken from National Center for Education Statistics showed a significant 32% decrease in illiteracy rates from 1930 to 1940 while only a 12% decrease from 1969 to 1979 during the Protest Movement and revolution. Now, I am not trying to advocate Nazi supremacy, but rather, pointing out some advantages arising from any form of government. Under an oppressive government, there will always be the oppressed and oppressors – otherwise, it would not be called an oppressive government.

Some people receiving benefits versus everyone constantly struggling, constantly fighting – which is what will happen if there is no government – is indeed a better comparison. This perfectly coordinates with my value, as social welfare and system benefits are needed to maintain life. Four, oppressive governments are forms of leadership and organization. This is my most general contention of the three, and it will not only sum up the reason why governments are better but also provide a well-defined link among them. Now, Hobbes had another theory about human nature, and that was developed on the basis of human rationality.

Persay, during the state of nature, the state of war, people will fight and die. However, do to self-preservation and rationality these people will eventually come together and form social contracts. They give consent to be ruled, forming a government, establishing organization. Naturally, people seek organization in their entropic world, meaning a government is logically sound. Now, with this leading figure in power, tough decisions can be made easily and efficiently. Take the election of 1812 between Democratic-Republican James Madison and Federalist DeWitt Clinton, for example.

Statistics taken from United States History’s website show that 50. 4% of popular vote went for Madison and 49. 6% for Clinton. Virtually half and half, and if there were no government or leading figure, people would fall straight back into the state of war and kill each other for conflicting opinions. How this actually ties into the aff’ side remains on my first contention’s point: oppressive more similar to gov’ than no gov’. The only difference if this were an oppressive government would be that Big Brother presses Madison’s percentage down to 38% and raise Clinton’s.

Decisions are still made, people still survive and prosper. Leadership and organization are needed for life, perfecting my value. So in conclusion, judge, please consider the affirmative side’s arguments as we have proven that a government, despite how controlling it is, is better than no government at all. Regardless of quality, basic security, welfare, and decision-making is provided here, not death, war, and poverty. Life is not protected in the state of nature, rather it is threatened and constantly tested. Oppressive governments give at least some part of this value, and therefore, should be considered. Thank you.

Speech on Oppressive Governments vs. No Government at All. (2020, Jun 02). Retrieved from https://studymoose.com/speech-oppressive-governments-vs-no-government-new-essay 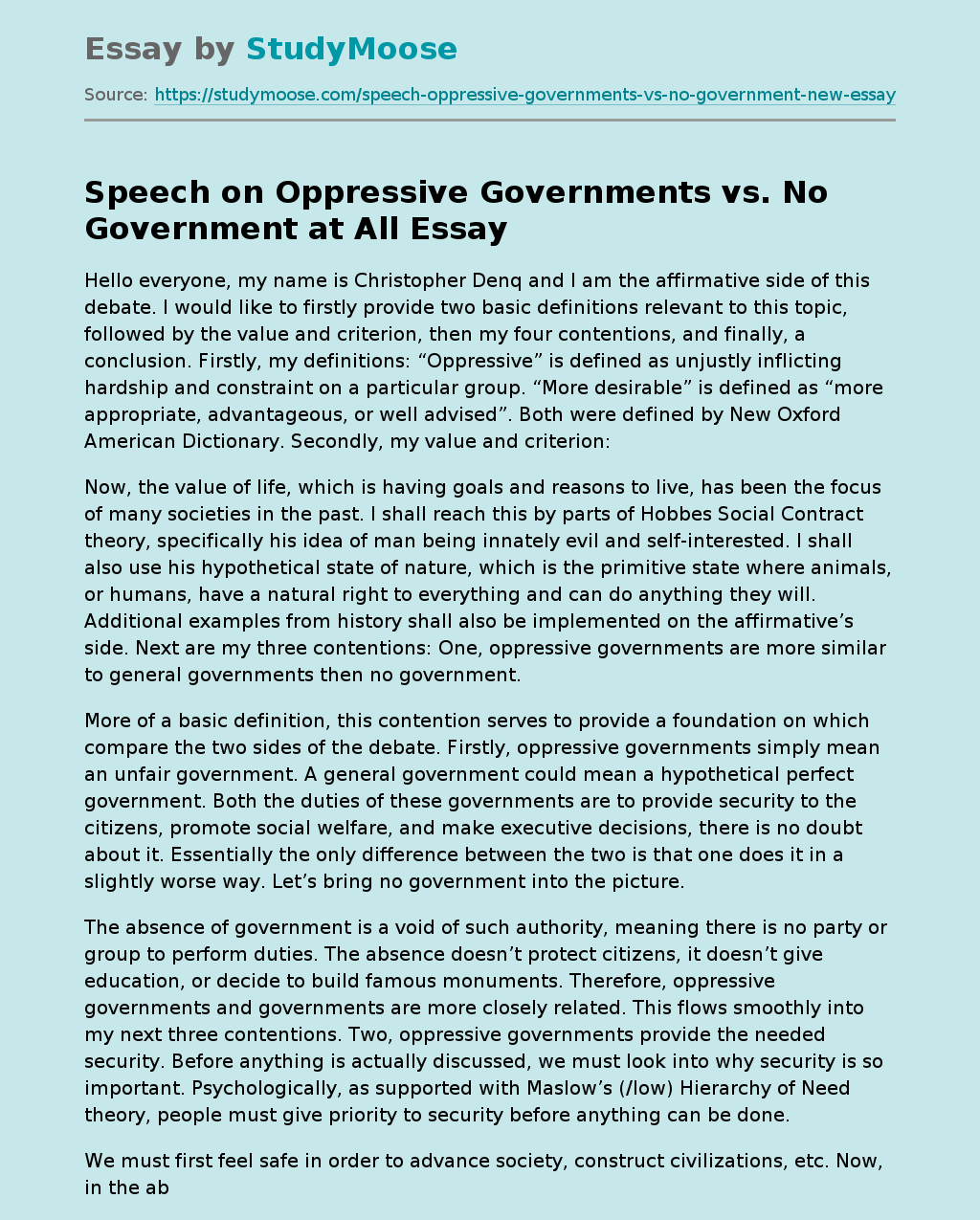