Whether The Internet Should Be Censored

These days the Internet has advanced at an alarming rate in the last 20 years. The Internet is an electronic communications platform that connects computer networks around the world. It is commonly recognised that Internet can help people finish what they would like to. Although plenty of people feel that Internet should not be controlled because people can freely access to information and the government can have less control over people thinking, it will be argued that Internet ought to be controlled for three main reasons: some negative information such as violent and pornographic contents are appeared on the Internet, Internet can exert the negative effects of national security, and some lawbreakers commit a crime via the Internet.

Turn in your highest-quality paper
Get a qualified writer to help you with
“ Whether The Internet Should Be Censored ”
Get high-quality paper
NEW! AI matching with writer

The first and most important reason to support Internet censorship is that the negative information on the Internet seriously influence people especially children. That is to say, when using the Internet, children do not have limitation to access a vast of information, thus, various news or events including pornography, fight and cheating are totally appearing in front of children, even the violence and anti-social behaviors.

The fact is that children are too young to distinguish between right and wrong and they have poor self-control. This makes it easier for children to be seriously misled to the wrong way and prove detrimental physically and mentally. According to the data, it reveals that thirty-six percent children who accidently access to the negative information will go on finding similar information due to curiosity and then they over-indulge these.

Hence, it is obvious that for the reason of children’s safety the Internet should be censored.

The final reason to support Internet censorship is that some individuals can proceed to commit a crime by taking advantage of the Internet. To be more precise, in the present-day, Internet criminals seem to be everywhere on the Internet. To illustrate, some criminals on the Internet commit fraud, snatch passwords and even unleash viruses to crash computers. Consequently, these crimes destroy greatly network security and enables computer users endure heavy losses.

In addition, the Internet is a highly interactive space, so the Internet can be covered very well, and it is easy to lose evidence of committing a crime because some people spend much time on finding what happened on their computer, so criminals can have enough time to remove all evidences before police come. According to cybercrime report in Australia, in 2012, online adults who have experienced cybercrime in their lifetime took up sixty-seven percent. Hence, it is necessary that government censors the Internet if government wants to minimize rate of crime.

In conclusion, a vast of detrimental effects is caused by the Internet. There are three main reasons: negative information, threat to national security, cybercrime. More specifically, the Internet with some negative information could seriously affect children, and Internet can help spies to steal countries’ secrets, and clearly enables lawbreakers commit a crime easily. For the above-mentioned reasons, it seems reasonable to expect governments to censor or limit the Internet in order to safer network platform.

Whether The Internet Should Be Censored. (2016, Aug 26). Retrieved from https://studymoose.com/whether-the-internet-should-be-censored-essay 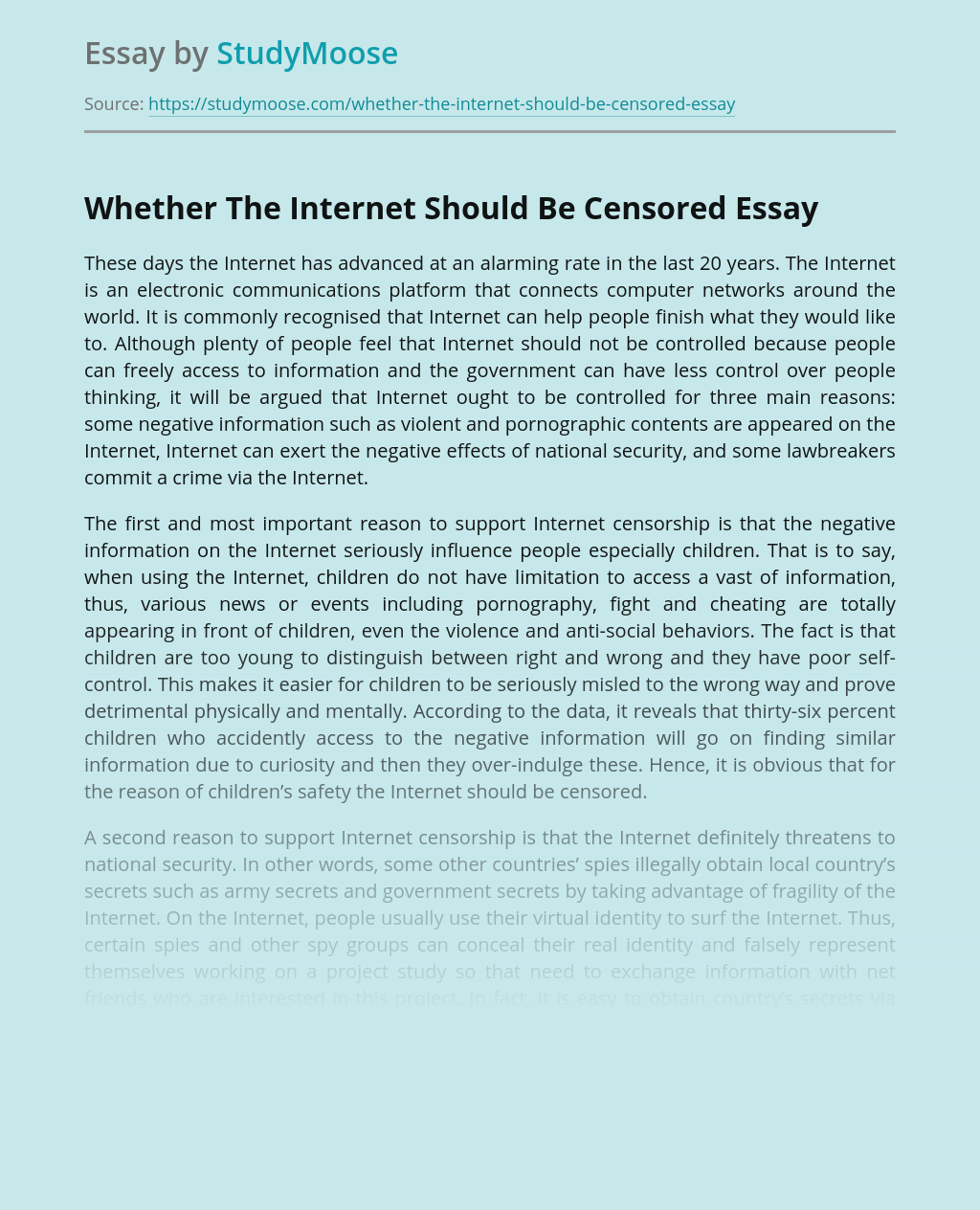 Turn in your highest-quality paper
Get a qualified writer to help you with
“ Whether The Internet Should Be Censored ”
Get high-quality paper
Helping students since 2015
Stay Safe, Stay Original