Don't use plagiarized sources. Get your custom essay on
“ An Epic Hero: Beowulf ”
Get custom paper
NEW! smart matching with writer

Beowulf makes an oath to kill Grendel and he does (page 37).

After Grendel is killed, the people tell Beowulf of Grendel’s mother and he tells them he will have her dead as well and indeed he does (page 41). Anglo-Saxons are very generous when it comes to sharing their wealth. Hrothgar offers treasure and gold to Beowulf in exchange for the death of Grendel’s mother (page 39). Wiglaf speaks of how Beowulf gave him and the warriors gold and other gifts, so they in turn should help Beowulf defeat the dragon and defend their leader (page 47).

In order for Beowulf to be like the Anglo-Saxons, he would have to have these characteristics and he did. Beowulf made allegiances between leaders, but relied on fate a lot which is exactly the trait of an Anglo-Saxon. His reliance on fate was a big rise for him, but when he faced the dragon fate was no longer on his side. Before the dragon, Beowulf believed that if he was given a task then fate would make it so.

At the end of Beowulf’s speech to the king, he exclaims, “Fate will unwind as it must! ” (line 189) which shows how he relies on fate. The allegiances he made helped him look better by giving him more fame. After Beowulf’s speech to the king, Hrothgar replied, “No one strange to this land has ever been granted what I’ve given you, no one in all the years of my rule. Make this the best of all mead-halls yours, and then keep it free of evil, fight with glory in your heart! Purge Herot and your ship will sail home with its treasures full” (lns 385-391).

With that, Hrothgar finally decides to allow Beowulf and his men to take down Grendel. Beowulf’s allegiances and beliefs embody the traits of the Anglo-Saxons. Love of fame, pride, and boastfulness are the downside to the Anglo-Saxon characteristics and Beowulf holds all three of these traits inside of himself. His pride and boastfulness is what intimidates others to keep them thinking that he is better than them and no one could beat him and Beowulf lets everybody know it.

When Unferth challenges Beowulf, Beowulf replies boastfully on how there is nobody that swims in the sea like him and how nobody is as strong as he is (page 30). Beowulf later goes on to tell a tale of him and a friend, “He could never leave me behind, swim faster across the waves than I could, and I had chosen to remain close to his side” (lns 274-276). His love of fame and success is not uncommon among the Anglo-Saxon culture. 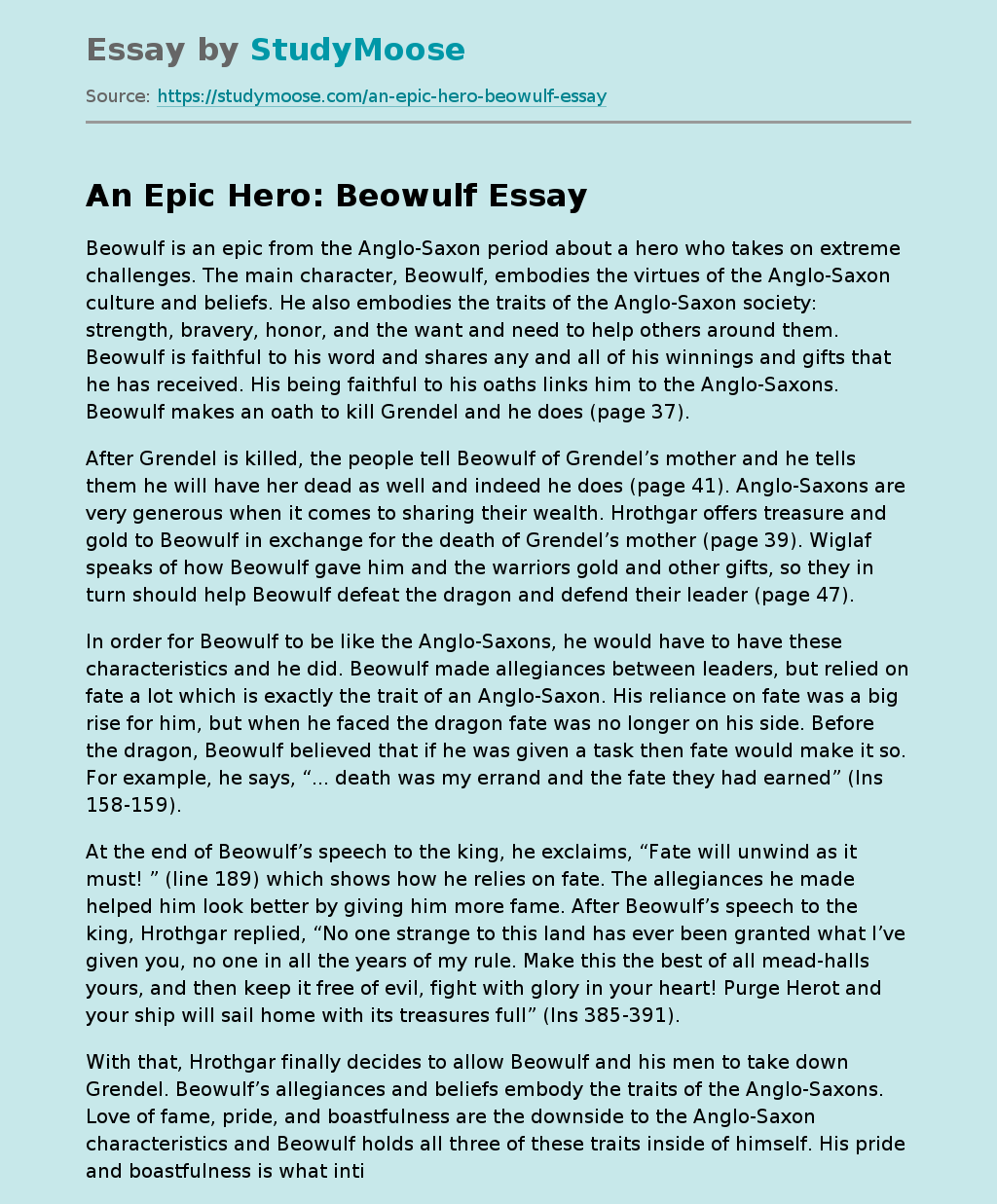