Beowulf is an epic poem that tells the saga of a brave hero, Beowulf. Beowulf displays his superhuman, brave abilities in the legendary battle between Beowulf and Grendel, a monster who is quite powerful and malicious in his own way. Beowulf is personified as a perfect hero who fought for his people and defeated evil with his immortal powers that he used to bring peace and justice. He constantly showed virtues admirable of any man during the Anglo-Saxon time period; he was wise, noble, brave and was a true hero.

Don't use plagiarized sources. Get your custom essay on
“ Virtue and Beowulf ”
Get custom paper
NEW! smart matching with writer

The epic hero embodies superior physical strength and ethical standards which is the highest ideals of the Anglo-Saxon culture.

The Anglo-Saxon epic hero values consist of bravery, loyalty, generosity, and friendship which appears in Beowulf and these values of the heroic code make Beowulf a hero. Within the epic poem “Beowulf” there is clear evidence that Beowulf exemplifies the qualities of a hero which are the desire to help others, bravery, generosity, loyalty, super human strength, and friendship.

Beowulf displays bravery and superhuman strength when he battles Grendel the monster himself and tears off the monster’s arm and hangs his arm in the hall to show that he has defeated the evil monster.

“From the rafters where Beowulf had hung it, was the monster’s Arm, claw and shoulder and all”, this displays that Beowulf has a superhuman strength that shows bravery that an epic hero should have. Another Anglo-Saxon value Beowulf portrays is courage, Beowulf stays underwater for hours to battle with Grendel’s Mother.

His intelligence is far above any others. He used the sword made by the giants to kill Grendel’s mother. Courage is a necessity to overcome fears and achieve a desired goal. That is exactly what Beowulf does to fight his opponents.

A modern day hero would be the pilot of flight 1549, Chesley B ‘Sully’ Sullenberger III. He is a hero in my opinion because he saved all of the innocent people on his flight to Charlotte. He was told to report back to the airport, due to the damage from the birds. But the pilot made a smart decision to land in the Hudson River and because of it he saved lives. Chesley Sully was a loyal hero who cared not only about him self but for others around him. These beliefs in the Anglo-Saxon heroic code are universal, even in today’s society we still respect the virtues of bravery, courage, generosity, loyalty and friendship.

Beowulf is the archetype of an epic hero. His bravery and strength surpass all mortal men; loyalty and the ability to think of himself last makes him worshiped by all. Beowulf’s best asset is his strength; He uses his superhuman power to defeat any monster that stands in his way. He also possesses great courage, which allows him to face great dangers, where other warriors would turn and go the other way. Beowulf is mostly recognized because he is a hero and protects anyone in need. That is why Beowulf represents the hero portrayed in epics, as well as Anglo-Saxon literature. 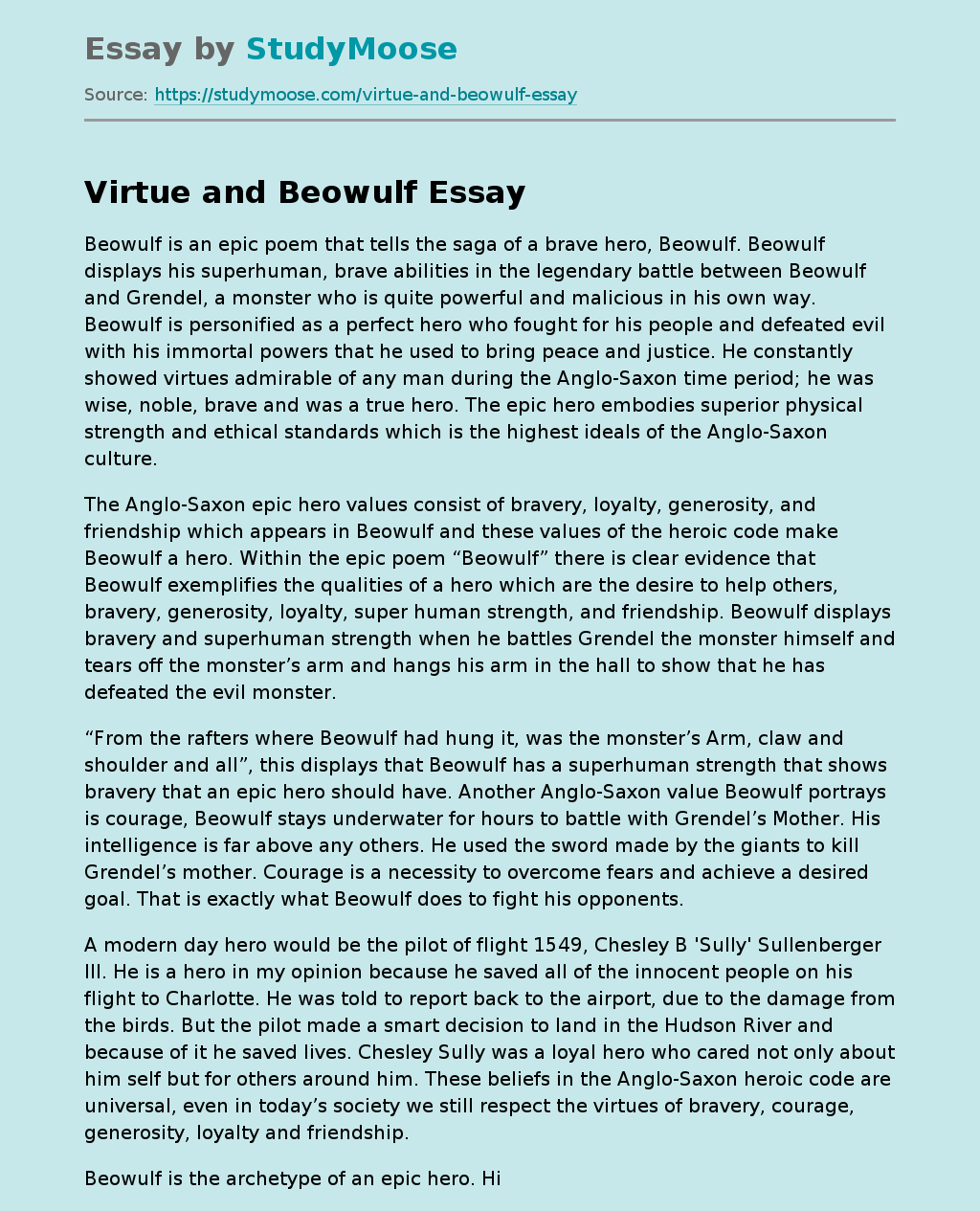