Epic is generally a long narrative poem on a serious and great subject, in a style that is highly important, and centers on a hero whose actions depend on the fate of a tribe, a nation, or the human race as a whole. Such epic poetries as Milton’s Paradise Lost and the famous Old English poem Beowulf, which was translated into the new English , are both somewhat different and yet similar in many ways. We are aware of the fact that Beowulf was passed down orally from generation to generation until it was written down, which follows the old style of epics, primary.

Turn in your highest-quality paper
Get a qualified writer to help you with
“ Beowulf and Paradise Lost’s Epic themes ”
Get high-quality paper
NEW! AI matching with writer

Unlike Beowulf, Paradise Lost follows a little of the primary traditions but with its own twist and is in the secondary family group. Also, pastoralism was important in the Renaissance literature such as Marvell’s The Garden, which is closely related to Paradise Lost. Generally, Pastoral writers deal with the lives of shepherds in the rural life and typically compare the happiness and pureness of a simple life and the corruption and sadness of the city.

Most characters in pastoral poetry are often used to convey the author’s social and moral believes. It is incredible, to say the least, how closely one can compare poetry that comes from such diverse and unique cultural and historical backgrounds. Also, it is very interesting how these authors change or attempt to change the genre that they are working with specially that of Milton and Marvell. In comparing and contrasting the epics of Beowulf to that of Paradise Lost, one must consider the significance of the epic characteristics and hero examples displayed, and also observe how pastoral themes can come into play with an epic such as Paradise lost in comparison to Marvell’s poem The Garden.

Essentially, an epic poetry has different characteristics that any “epic” poem has to fall under; it is a long narrative poem in great style, presenting characters of high position in a sequence of events, their expansion of maturity in different episodes, and overcoming obstacles. We can see that epics first took shape from the work of various unknown poets; an example of this is Beowulf, which we don’t know much about the writer. This kind of style in poetry breaks into two different groups, the primary and the secondary. Primary is usually a folkloric style and secondary appeals more to the later generations and is more artistic; we can clearly understand that Beowulf is in the primary group while Paradise Lost in the secondary group.

Furthermore, epics, primary and secondary, both share a group of common characteristics, which are: the hero has an impressive physique, is very important to an ethnic group, national or international, and is historically important. Also, the setting is greatly important as well because it covers nations, the world, or even sometimes the universe. Additionally, the action requires a heroes’ courage. Moreover, supernatural forces such as god, his angels, and the evil-doers all are caught up in the middle of the action and intervene from time to time. Last but not least, most epic characters are in high positions like kings, princes, noblemen, members of the upper classes, and sometimes godly beings or Ghosts.

In the Epic of Beowulf, Beowulf himself overcomes many obstacles and tests. To briefly examine this, Beowulf and a strong warrior make a bet to see who can stay in the water the longest. However, the most important and the most interesting one is the hardship Beowulf endures is in the battle between him, Grendel and his mother, the evil-monsters. As a result, Beowulf has been declared as a great epic poem simply because of the various characteristics it clearly possesses. Additionally an epic consists of a hero who is great and larger than life, predominately.

Beowulf is, without a doubt, a perfect example of this hero because of the amazing acts of heroism he accomplishes. Epic characters are very good with and give numerous speeches that bring about the past or, more importantly, the speaker’s characteristics. Beowulf does not give many, but for the little he gives, we learn a great deal about his character traits. However, Paradise Lost’s Satan, who is not the hero of the poem, but the main character, uses speech as one of the main powers he posses to overcome the obstacles that lay before him, which is to ruin mankind.

Moreover, Milton’s Paradise Lost, is a retelling of the biblical story of the creation of man. Similarly, this poem has the characteristics of an epic poetry because of its very long, detailed, narration, which is the story of the origin of Satan and the fall of mankind. The poem revolves around Adam and Eve in the Garden of Eden: the focus is mainly on how eve when tempted by Satan who directs her to disobey God’s rule and ate from the forbidden tree of knowledge. At first he was called Lucifer, an angel in heaven who rebelled against God, and was finally sent to hell with his followers. So basically, Paradise Lost is an epic poem, which, in fact, holds a universal human interest. Paradise Lost is obviously theological, but Beowulf, regardless of its lack of Christian references, also deals allegorically with matters of the Christian religion: the monsters symbolize evil, unleashed, surrounding the human nature to bring destruction and chaos to them.

Also, by seeing epic as pastoralism, Milton integrates epic elements of Christian believes to human’s spiritual struggle. In addition, the two great pastoral poets of the Renaissance, John Milton and Andrew Marvell, both used many pastoral elements in their work. Milton used pastoral elements in several of his works, especially in Books 4 and 9 of Paradise Lost. In Paradise Lost, Milton is less concerned with pastoral landscapes and lost paradises than with a “paradise within.”

Furthermore, the way Milton describes nature is that it is generally uncontrollable and that man civilize them. Milton’s description of the garden and Adam’s and Eve’s duties within it indeed proves this viewpoint. Also, Satan’s entrance into the garden shows both the ordinary and civilized characteristics of the world can be altered by evil. In comparison, Marvell’s poem The Garden, the speaker accepts the garden as a happy state to experience as a treat within. Marvell seems to turn away from society as whole in favor of nature. He particularly shuns the company of women, as he clearly favors the beauty of the trees more than the beauty of women.

All in all, we see that through Beowulf, Paradise Lost, and The Garden, the authors intentionally try to change the genre that they are working with and add a style of their own, which, in general, are very interesting. Although the authors of both Beowulf and Paradise Lost follow the characteristics of an epic poem, however both their main characters are different, one is an evil-doer who brings destruction and chaos to mankind and the other being a great hero, who brings to an ends of the destructions being done to his people and land. Also, we observed that the Pastoralism in both Paradise Lost and The Garden are different in many ways as well. 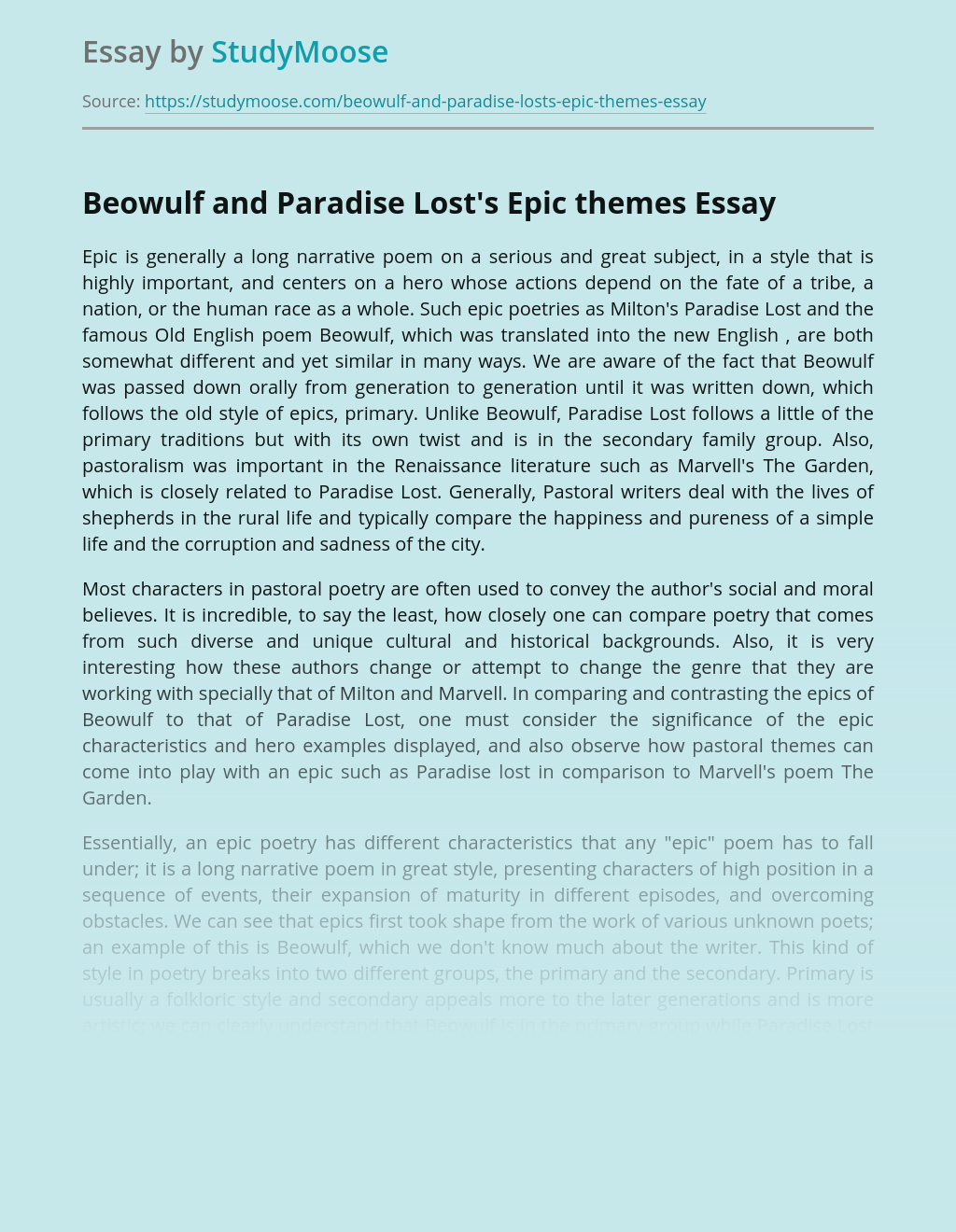 Turn in your highest-quality paper
Get a qualified writer to help you with
“ Beowulf and Paradise Lost’s Epic themes ”
Get high-quality paper
Helping students since 2015
Stay Safe, Stay Original