Neoclassicism is the idea about art and literature that evolved during the 17th and 18th century greatly affected by classical tradition. Changes in culture and consciousness influenced this period. Crucially, the Neoclassical Age, also known as The Age of Reason English Literature, can be classified into The Restoration Age (1660-1700), The Augustan Age or The Age of Pope (1700-1745), The Age of Johnson or The Age of Sensibility (1745-1785). Among these, Milton had a predominant influence over the Restoration Age. His important contributions during this period were Paradise Lost.

Paradise Regained and Samson Agonistes. Neoclassical poetry as such, did not have any concerted body of principles and methodology. The prominent writers shared a common view based on their response to the various ancients. They concurred regarding the concision, elegance and wit of their classical forerunners. Their poetry matched the intelligence of Horace’s Verse, beset energy of Juvenal’s Satire and the heroic raise of Homer’s Epic. Their theory of literature was shaped by a composite classical influence and which Aristotle and Horace stood out.

According to the neoclassical critics, the overall meaning conveyed by any work should be the principle by which all its aspects should be assessed. Literature works of this age were judged by the impact it created and the poet was advised to adapt particular instruction and pleasure he wished to give the readers. Milton was the poet of steadfast will and purpose, who moved like a god amidst the fears, hopes and changing impulse of the world ignoring them as insignificant things, which can deviate progression of one’s purpose.

This attitude made him a successful Restoration poet.

“His writings were greatly influenced by the Restoration Age. He shows himself the Puritan that he was by birth and upbringing; but nurtured on the classics made popular by Renaissance, he refused to surrender his ’better judge-ment’ to sheer faith and loved secular pleasures no less ,if they added to the richness of life: intellectual liberty, art, literature ,science, philosophy ,and the pagan mythology of ancient Greece and Rome. These twin influences vie with each other in all that he wrote”. (Prasad, P. 42) Paradise Lost gave an unforgettable recognition to Milton in the history of English literature.

The poem was a great one due to its completeness and the visual immediacy imagined by Milton. As a long poem, it is a monumental achievement, both intellectually as a work of the literary imagination and the powerful expanses of its verse, which, with the strength of classical precedents behind it, proved inimitable. The modern reader can take in two facts from Paradise Lost, a thorough familiarity of first few chapters of scripture the general principles that constitute the Calvinistic theology. However, it is a letdown if we try to use the poem to teach a literal acceptance of one or the other.

The underlying theology of Paradise Lost is overlooked. Nevertheless, the magnificence of the Puritan dream and the splendid melody of its expression, as depicted in the book, cannot be disregarded. A feeble reading of the text can make the reader to comprehend why it is compared with Divina Commedia of Dante. Though Milton has been criticized for mocking the present trend of science, the poem is realistic based on myth. The composition and notion of Paradise Lost had a mesmerizing effect which only Shakespeare, Dante and Homer were able to produce. It is clear that the epic does not have unrivaled excellence in its lyrics.

It is inconsistent and ambiguous which are not that evident in the other prolific writers. However, due to his unique style it made an everlasting impression. Milton is a master of rhyme in his shorter poems and a master of blank verse in the longer ones. He undertakes a style, which reaches a great level in Paradise Lost. It expresses the loftiest thoughts in the loftiest manner. It is achieved by a preference for the uncommon in word and phrase, conciseness, suggestiveness in place of detail, restraint in the use of ornament, wealth of biblical and classical allusions. (Prasad, P.43)

The purpose of Milton is equivalent to other great writers. He has given us a living, not literary, epic. It is the influence of the neoclassical age, due to which it was possible. Historically the age was one of tremendous conflict. The literature of the age is extremely diverse in character and the diversity mainly due to the breaking up of the ideals of the political and religious unity. Milton emerged as a successful poet due to the neoclassical features in Paradise Lost. Thus, the Neoclassical Age ended paving way for the various other ages in the history of English. 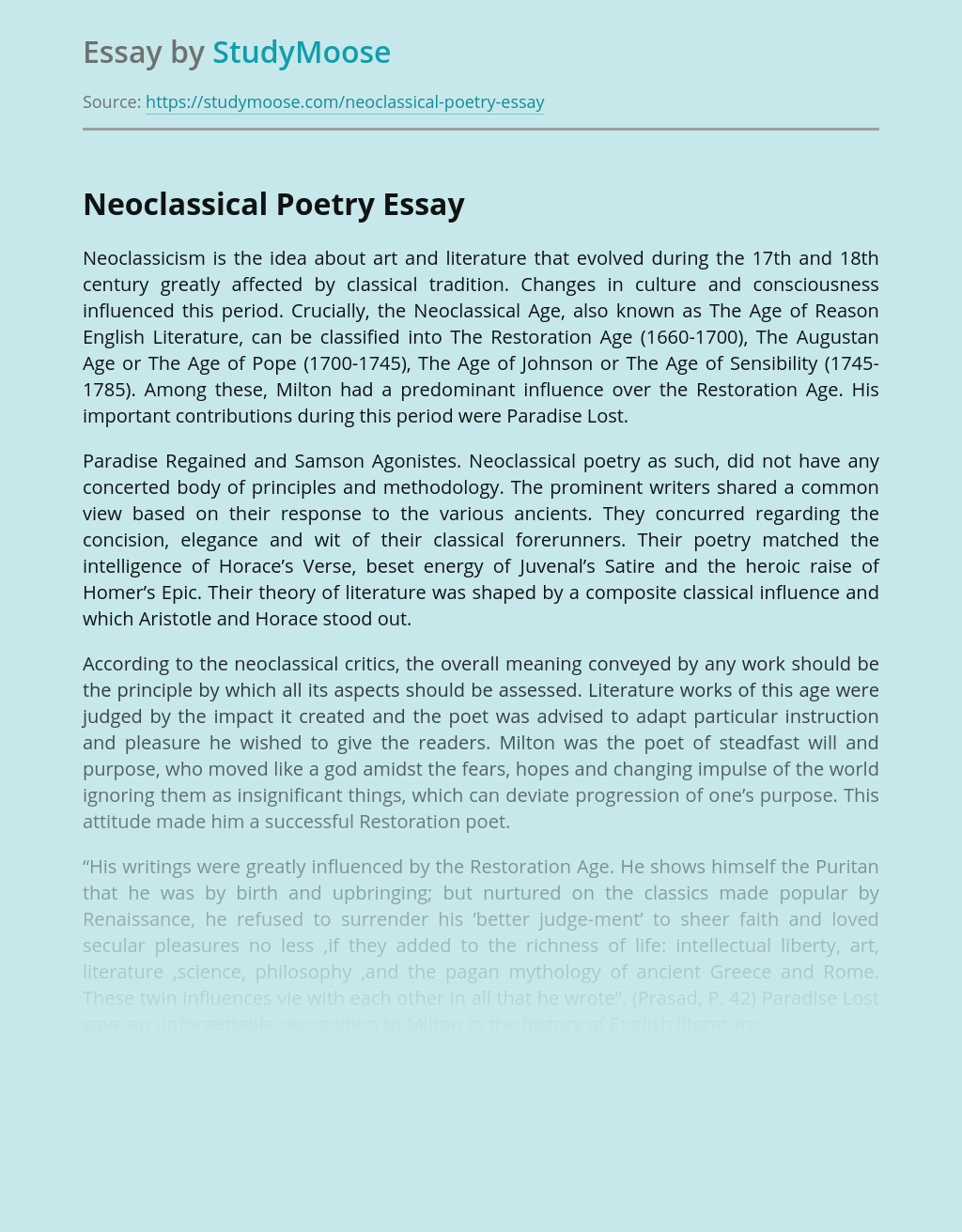