Book One of John Milton’s Paradise Lost: Satan as Hero

In literature and other forms of art, the character of Satan had always been depicted as nothing more than an evil entity. He was usually represented as the Devil, the creature capable of the ultimate form of wickedness. He was known to be against the Supreme Good, for he was the angel who initiated a rebellion against God. In various stories and movies, Satan had always been depicted as this static character. However, the depiction of Satan in Book One of John Milton’s “Paradise Lost” was truly an exception to the stereotype.

Don't use plagiarized sources. Get your custom essay on
“ Book One of John Milton’s Paradise Lost: Satan as Hero ”
Get custom paper
NEW! smart matching with writer

In the first part of his epic, Milton showed the readers that Satan had positive traits, though he used it in a negative way. Contrary to the usual portrayal of the persona of Satan, John Milton depicted Satan as a heroic character in Book One of “Paradise Lost”. What makes a character heroic? One feature which makes a hero is a commanding presence. Heroes in literature, such as Achilles and Odysseus, are characterized with remarkable strength.

These are individuals who possess imposing, if not dominant, personalities.

It is their commanding presence which allows them to lead their men effectively, as it renders them as figures of authority. Combs wrote, “Heroic qualities reside in some larger-than-life figure who committed great deeds in a mythical past” (26). While Satan’s deeds can only be considered great in his own opinion, it cannot be denied that he was rendered by Milton as a larger-than-life creature in Book One. Milton presented Satan as a hero to the readers by showing how massive and mighty he is.

To demonstrate the size and strength of Satan, the narrator of the poem used an analogy with reference to Greek mythology.

Satan was depicted as similar to the titans who fought against Jove. Milton wrote, “Lay floating many a rood, in bulk as huge/ As whom the Fables name of monstrous size,/ Titanian, or Earth-Born, that warr’d on Jove” (I. 196-198). Milton also compared Satan to the Leviathan, which he described as “hugest that swim th’ Ocean stream” (I. 202). Indeed, the author had established Satan to be larger-than-life in the epic. Satan is considered as a heroic character in Book One because of his commanding presence. Another trait which a hero must possess is courage.

Heroes are known to be courageous figures, those who remain unnerved during difficult struggles or when confronted with the inevitable. Satan is a heroic character in Book One of “Paradise Lost” because of the courage he displayed. He proved to be courageous because he displayed unshakeable resolve amidst trying times. It is known that Satan used to be an angel who sought to overpower God. He gathered his followers and rebelled against Him, only to fail in their selfish pursuit. As a result, Satan and the other angels were sent to Hell.

Hell proved to be most unpleasant compared to Heaven. While there was a fiery lake in Hell, its flames gave off darkness instead of light. Milton wrote, “As one great Furnace flam’d, yet from those flames/ No light, but rather darkness visible” (I. 62-63). While a weaker personality may have given up on such dire situation, Satan was undaunted by his present dilemma. Instead of being dragged down by his fall from grace, he embraced his place in Hell. Satan remarked, “To reign is worth ambition though in Hell:/ Better to reign in Hell, then serve in Heav’n” (I. 262-263).

In addition, Satan’s fall from grace did not diminish his determination in his pursuit of evil. God may have defeated Satan in the rebellion, but the Supreme Deity did not defeat his will to fight. Satan said, “All is not lost; the unconquerable Will,/ And study of revenge, immortal hate,/ And courage never to submit or yield:/ And what else not to be overcome? ” (I. 106-109). Hence, Satan is a hero because of the courage he displayed. Also, Satan appeared to be a hero in the first part of Milton’s epic poem due to his bravery. How did Satan exhibit bravery in Book One?

Satan proved himself to be a brave character because he did not reveal fear even though he was confronted with danger. After the angels failed in their revolt against God, some of Satan’s comrades have lost hope. For instance, Beelzebub was greatly disheartened by the defeat. Their failure convinced him of God’s power. Beelzebub told Satan: “Fearless, endanger’d Heav’ns perpetual King;/ And to put to proof his high Supremacy” (I. 131-132). Unlike his companion, Satan still wanted to challenge God’s power. He does not regret initiating the war, and still wanted to execute another battle.

Satan wanted to wage a second war against God, hoping that the next attempt would be more successful. He uttered, “We may with more successful hope resolve/ To wage by force or guile eternal Warr/ Irreconcileable, to our grand Foe” (I. 120-123). Satan is a heroic character in Book One of Paradise Lost because he was unafraid to face an enemy stronger and more powerful than him. The three aforementioned traits truly render Satan as a heroic character. With those three traits, Satan would follow the tradition of other heroes in literature.

Milton made Satan appear as a warrior hero with the other angels as his comrades. However, it cannot be denied that there would be instances wherein the other warriors are discouraged by the outcome of their battles. Therefore, it would be the responsibility of the leader to motivate the rest and make them continue on in the path they chose to travel. In this case, Satan again proved to be a heroic character in Book One. He was heroic because he asserted his leadership and convinced the other angels to do as he pleased.

Satan had a plan against God and despite the defeat, he never strayed from it. In contrast, the other angels had become weary of their situation. It became Satan’s task to uplift his followers and make them believe in his plan. When Beelzebub was discouraged after hearing Satan’s suggestion of another attack, the latter gave a speech to convince the former. Satan said, “To do ought good never will be our task,/ But ever to do ill our sole delight” (I. 159-160). His optimism over his grand scheme against goodness was so persuasive that the other fallen angels had obeyed his orders.

Because he was a leader who kept his followers on the path towards his desired end, Satan can be considered as a heroic character. In Book One of “Paradise Lost”, Milton truly painted a rare picture of Satan. He made one of the most despicable characters in history as an appealing character. Satan became appealing to the readers because Milton’s depiction paid more attention on his positive qualities. His larger-than-life persona, as well as his courage, bravery and leadership, made Satan an admirable individual. Moreover, not only did Milton make Satan appealing, he made him sympathetic as well.

It is obvious that Satan had questionable logic; his arguments were flawed. Despite this, he was still able to persuade the other angels. He was also able to make the readers sympathize to his cause, no matter how wicked it was. When Satan first spoke in Book One, he described the fallen angels’ undesirable state in Hell. His words persuaded the readers of God’s wrath. Satan said, “He with his Thunder: and till then who knew/ The force of those dire Arms? ” (I. 93-94). From his speech, Satan allowed the readers to think that God was at fault and his actions against Him were justified.

Nevertheless, the text itself is proof of Satan’s free will. Satan was free to act as he pleased, and he chose to gather his followers and rebel against God. Satan was the one at fault because he was made free but he decided to use his freedom for evil. Therefore, while Satan may seem to be a heroic character, it does not mean that he was not flawed. Unlike most accounts of Satan, Book One of “Paradise Lost” proved to be different. John Milton deviated from the stereotype and presented Satan as a heroic figure.

He made Satan as a commanding character who was courageous, brave and convincing to others. As a result, Milton depicted Satan as a character with redeeming qualities. However, these redeeming qualities are not enough to make him a perfect persona. Indeed, Satan is portrayed as a heroic character in Book One of “Paradise Lost” by John Milton. Works Cited Combs, James E. Polpop: Politics and Popular Culture in America. Wisconsin: Popular Press, 1984. Milton, John. “Paradise Lost. ” University of Oregon Web Site. 1997. 17 July 2009 < http://darkwing. uoregon. edu/~rbear/lost/lost. html>. 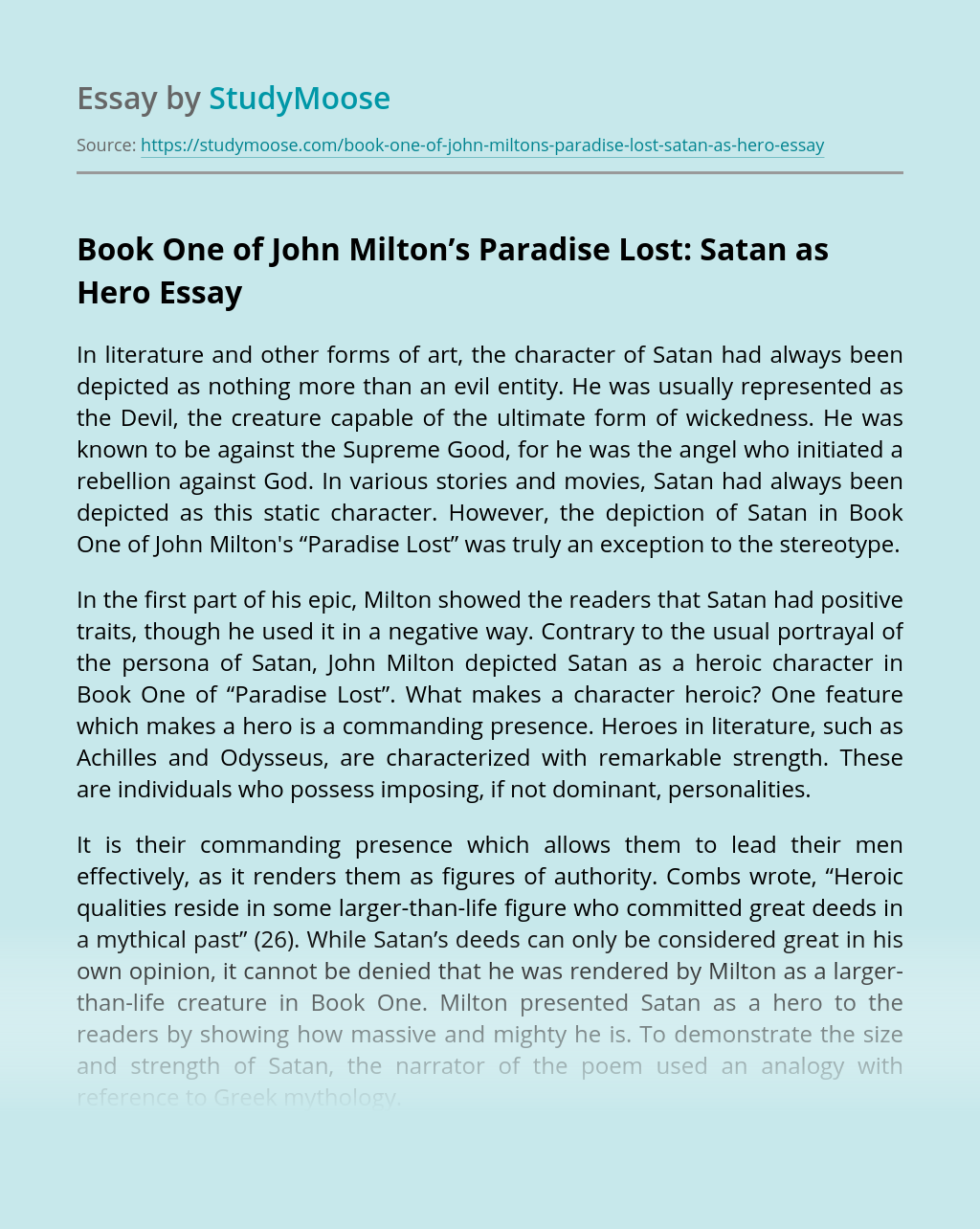