"Paradise Lost" and "The Duchess of Malfi"

To some respect, both Milton and Webster present their characters with certain motives of ambition. Milton once said “The mind is its own place, and in itself can make heaven of hell, a hell of heaven. ” highlighting that ambition is an internal cause, simply a human flaw and cannot be ignored and can cause tragedy in some respect to what is good or perhaps manipulate the way of thinking in men.

In Paradise Lost, Milton shows us that ambition is the cause of madness and self-torment through his portrayal of Satan and how ambition has ruined this archangel – “But his doom reserved him more wrath; for now the though both of lost happiness and lasting pain torments him” emphasises the way in which Satan’s greed for power has caused him to realise what he has lost and how he longs to regain his place alongside God with equal power, “he trusted to have equalled the most high”.

Don't use plagiarized sources. Get your custom essay on
“ “Paradise Lost” and “The Duchess of Malfi” ”
Get custom paper
NEW! smart matching with writer

The Duchess of Malfi

Similarly in The Duchess of Malfi, Webster emphasises that ambition is the cause of your own downfall; leading to corruption and death.

“Ambition is a great man’s madness, madam” highlights that ambition in itself is a form of madness. It shows that ambition is a personal power which if not controlled can cause the manipulation of the mind, a lasting torment as a “man’s madness” which will not tire. Milton begins his epic poem by emphasising the extreme power of the creator, God as describing the “Heavens and the Earth rose out of chaos”; not moulded from unformed matter, but from nothing.

He describes his own personal ambition, to “invoke the aid to my adventurous song, while it pursues things unattempted; yet in prose or rhyme and justify the ways of God to men. ” Indeed, it his Lucifer’s personal greed for power which causes the archangel to fall and be banished to Hell for his attempt to overthrow the monarchy of God. “He trusted to have equalled the most high, if he opposed; and with ambitious aim against the throne and monarchy of God” highlights the ambition of Lucifer to gain equal power to that of God, which has caused his downfall to be banished into the depths of Hell.

The growing immortality and sensuousness, which the court displayed, made the citizens sympathise with the Puritans. People began to criticize the court and religion more vocally. This critical temper had its effect in literature of the time too. Times were running out and pessimism and satire arose out of the dissatisfaction among the people. The melancholy mood found in the literature of the late 16th and early 17th century was not affection, but a natural expression of the gloom and frustration that people of the time felt. The preoccupation of Webster with decay, disease sickness and death can be explained in the light of the social history. Webster excels in the sudden flash, in the intuitive but often unsustained perception. At times he startles us by what may be called the ‘Shakespearean’ use of the common word. In the dark night of ‘The Duchess of Malfi’ at the high point of tension when the Duchess is about to die her last words are: “Go tell my brother, when I am laid out.

The Duchess of Malfi, like any good tragedy teaches us to know the world and its ways better. There are plenty in the play that are sensational and horrifying making it melodramatic to some extent, and they appeal to the morbid instincts of the playgoer. However, the principal victim of this play is not merely the sufferer, the Duchess, but the unconquerable and unsubdued human spirit of hers. In this the Duchess comes close to Shakespearian heroes and heroines. She keeps up her dignified spirit of defiance towards the evildoers, but is remarkably humble before heaven. She displays her sensuality not only in her marriage but also in devouring the apricots with evident greed. She becomes blind in her passion for Antonio and is credulous in taking Bosola’s words at face value. Her shirking of her responsibility, as a ruler of Malfi is a glaring flaw.

The description of Bosola

It stresses that Lucifer’s personal desires is the cause of his own torment. Similarly, the description of Bosola – “Indeed, he rails at the things which he wants” shows that ambitious desire is in its own right a curse on the human mind. Webster’s powerful imagery stresses the strong use of adjectives, “rails” to emphasise the intricate nature of a natural emotion which causes our own heavy downfall. The term “he” suggests that ambition is our own madness, based on our own private desires and is not considerate of the effects on others.

This is a similar suggestion emphasised through Satan’s public vs. personal desires, having instructed the rebel angels through his persuasive speech “to do ought good will never be our task, but ever to do evil will be our sole delight. ” Here, we understand that Satan instructs the rebel army to cause chaos in the army to defeat God’s reign of power and to gain his “blissful seat”; and the angels seem to follow his command to gain from their choice to fall, initially being disappointed with their choice – “is this the mournful gloom for that celestial light?”

It is the rebel angels own self-greed alongside Satan’s own personally hidden desires to win the fight against God for his punishment which has caused their eternal suffering and torment of their previous life. The theme of disappointment similarly runs through The Duchess of Malfi as Bosola shows how someone who is always hopeful and ambitious will always be disappointed – “Who would rely upon these miserable dependencies, in expectation to be advanced tomorrow? What creature ever fed worse than hoping Tantalus”

How ambition causes the downfall of men

It emphasises exactly how ambition causes the downfall of men who seek to drive further what cannot possibly be driven to new heights. The fact that someone who is ambitious will always be disappointed highlights the extremities of the maddening situation in which ambitions can cause torment and eternal suffering from longing to gain more; in this instance the Duchess’s brothers attempting to gain control over her actions. Satan, the first angel to fall from Heaven was banished for his ambition and drives to disrupt the monarchy of God.

After being banished to Hell to “dwell in adamantine chains and penal fire”, it is only then that the cost of being ambitious is recognised – “But his doom reserved him more wrath; for now the thought both of lost happiness and lasting pain torments him” shows that Satan is regretful of his actions. Milton uses “adamantine chains” to describe the empowerment of God to banish Satan to an unbreakable prison; highlighting the extreme situation of self-torment and regret in which he is warped by.

He shows that Satan is under an eternal curse, imprisoned in everlasting woe of “lost happiness and lasting pain”. The term “lost” is ironic as it emphasises the fact that after ambition has taken hold, it can become a “man’s madness” which is inescapable. “So spake the apostate angel, vaunting aloud but racked with deep despair” suggests Satan has become maddened by his actions caused by his ambition to overthrow God.

“Vaunting aloud but racked with deep despair” emphasises Satan’s furiousness of his punishment, and is seen unforgiving of God for his eternal suffering. However, it is this in which he discovers his longing and the ability of not being free, chains remaining unbreakable; he is unable to conquer his ambition, which has caused his maddening, wild grief. Milton describes Satan’s Hell – “no light but rather darkness visible served only to discover the sights of woe, regions of sorrow, doleful shades; where peace and rest can never dwell”.

Milton’s term of light as rather “darkness visible” highlights Satan’s blackened situation of ongoing internal suffering and manipulation of the mind. The term “peace and rest can never dwell” is used to emphasise the longing of activity and torture, an eternal suffering to act as a constant reminder of the situation caused solely by your own personal ambitions. “Hope never comes that comes to all, but torture without end still urges” shows that hope has been banished, and that Satan feels regret for his choice to seek more than what he had been given already.

However, it is his self-greed and ambition which had caused Lucifer to become blind of his “celestial light”. In a similar light, Ferdinand has become blinded by his own ambition to control the Duchess, and it is only after the death of his sister in which he realises how his desire has caused tragedy in not only his own life; but also in everyone around him. Bosola has been sent “to live in the court here and observe the Duchess, to note all peculiars of her behaviour.

As an observer for Ferdinand in order to have control over his sister. Having eventually caused the death of his sister through her brothers’ attempts to stop her from remarrying, it is clear that the curse of ambition causes the mind to react strangely and repent your actions, after being blinded by greed and personal desire; in this instance, ownership of the Duchess. Ferdinand is shown to have become entranced by his own image and has grown mad with it, caused by his own ambition – “look, what’s that follows me? “ 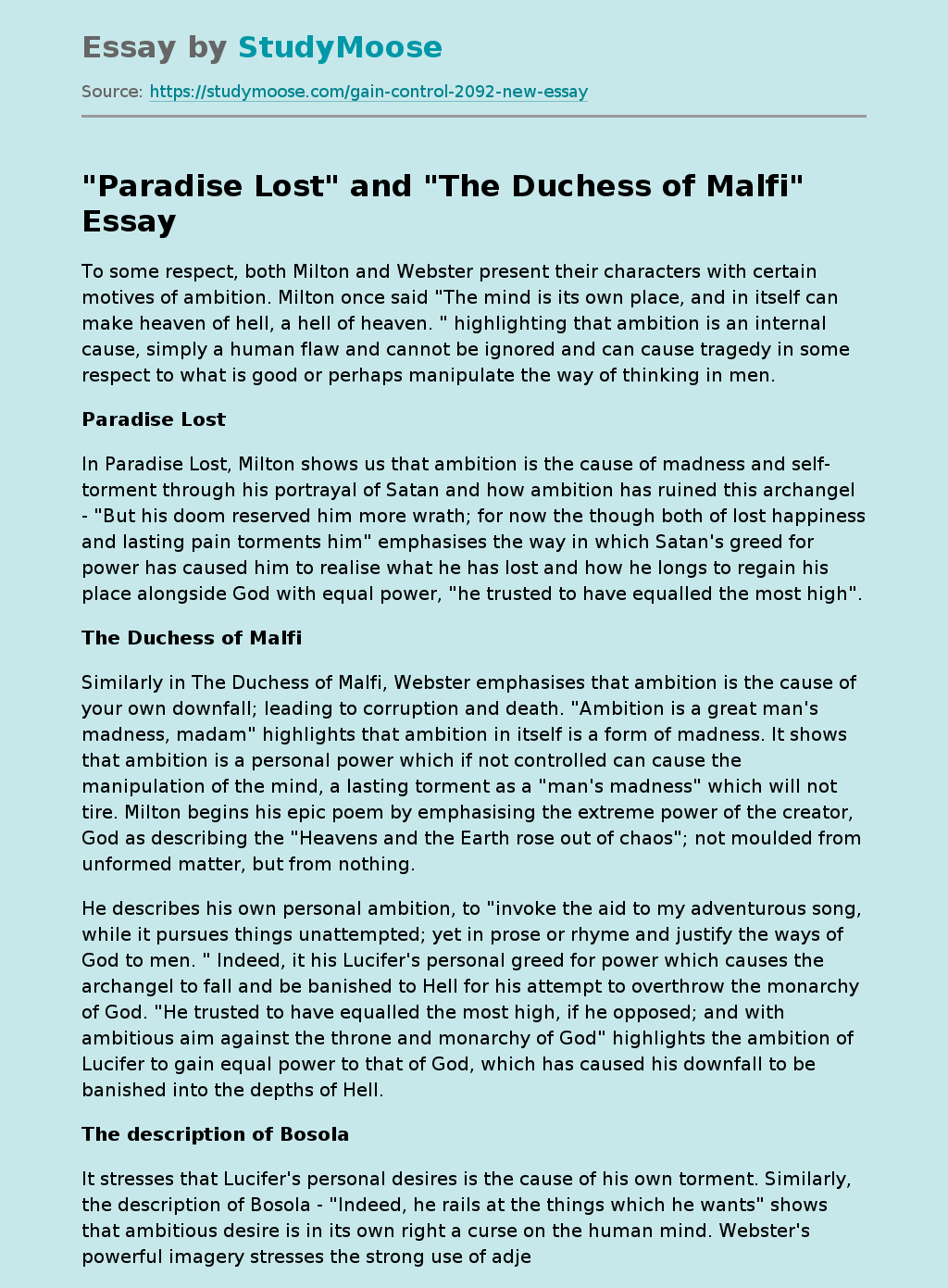