‘The Ramayana’ and ‘Paradise Lost’ hold stories of ancient times that tend to explain the existence of two different cultures in the present world. Milton, the author of ‘Paradise Lost,’ concerns himself with the Christian story of the ‘Fall of man’ while Valmiki, the author of The Ramayana, tries to bring out an explanation to the goals of human life. In this assignment, I would like to compare author’s use of two female characters in both ‘The Ramayan’ and ‘Paradise Lost’ as I try to explain the mythological themes expressed in these two old myths (Jung 64).

Turn in your highest-quality paper
Get a qualified writer to help you with
“ Epic Stories ‘Paradise Lost’ and ‘The Ramayana’ ”
Get high-quality paper
NEW! AI matching with writer

Eve in ‘Paradise Lost’ and Sita in ‘The Ramayan’ are the two female characters used extensively by the authors in these separate stories in an attempt to explain the goals of human life and likewise the reason for the fall of man.

The story exhibited by Milton in the book ‘Paradise Lost’ has been told in countless stories and also portrayed in pictures in most religious places as well as paintings to that effect.

Proficient in: My Favourite Book Ramayana

Similar stories that relate to the book ‘The Ramayana’ can as well be found in Classical mythology (Fryer 233). Jung explains the term myths to be fatal experiences whose effects are normally felt in personal life. He classified myths according to its unconscious nature because he believes that by doing so, they will be accepted by the society hence help shape their traditions and culture. The contents of the personal unconscious are chiefly the feeling-toned complexes while the contents of the collective unconscious are known as archetypes (Jung 66).

Different interpretations have been made in relation to the Garden of Eden story with most Christians holding the belief that it was actually true, another interpretation tries to portray it as a story that shows transition in the way of life of the ancient people while a final interpretation tries to show that the truth behind the myth is baseless, though universally people live in accordance to the values it shows (Fryer 248).

According to the unconscious nature possessed by people about myths is what constitutes complex feeling-tones of individual’s private and personal psychic life. Eve, in the book ‘Paradise Lost’ has widely been regarded as the symbol of unconscious. She is seen as the figure of the animating principle and also as one that develops the growth of this principle. Franz holds the same view and explains further that she makes us believe that life may be lived. He says “Eve is full of traps and snares and in order for man to fall, he should ensnare himself there, reach the earth and stay caught so that he should live a full life” (Jung 68).

This he believes that Eve accomplished by not resting until she had convinced Adam of the goodness of the forbidden apple. Eve does not see the apple as evil but as an opportunity to become wiser (Franz 56-74). Empson argues that Eve sees the eating of the apple as a test of her courage to break the commandment and graduate to a new stage of relationship with God Almighty (Empson 45-57). In attempting to comment on the serpent’s witty advances to Eve by explaining the good that comes with breaking the commandment and the benefits that eating the apple brings, Empson agrees that Eve feels that she has to break the commandment so as to show her courage and whether her desire to get to Heaven is real enough to call her courage out.

He does not accept the notion that Eve is a female symbol that is used to bring out the unconscious belief in the book ‘Paradise Lost’. Empson differs with Jung’s belief of viewing eating of fruits as a sign of new beginning of life. According to Empson, the test is rooted in hermeneutics. He believes that the reason why Eve disobeyed God was because she thought God never meant what he said (Empson 122-247). The two, Empson and Jung, though both believe that Eve’s contribution to the fall is due to her desire.

She does not choose to eat the apple because it is evil, but because it is an opportunity to attain another good in the book ‘Paradise Lost’, Milton differs with his predecessors who had also written stories about Adam and Eve. Milton predecessors portray Eve as deficient in virtuous enterprise. They blamed Eve for the woes of the world and their concept of Eve rooted in dualism, a view that is not depicted by Milton in the book ‘Paradise Lost’. Milton, represent Eve as a literary figure separating her from primitive conception by those who hold on tradition yet they are unconscious of prime examples of Eve in the society.

Sita is first introduced in the epic story at Janak’s wedding. She is regularly referred to as faithful, gentle, soft and sweet. In the epic story, a marriage of husband and wife is regarded to as a linkage. This resembles the marriage as depicted in the bible in the book of Genesis, where Adam is quoted as referring to Eve as ‘flesh of my flesh’. The epic story also shows man as superior to the woman, as it indicates that the woman is the shadow to the man’s masculine substance. Sita’s limitation occurs when she gets obsessed with her attraction to the deer’s beauty that she sends Rama out to go and look for it. Her obsession is magnified when she gives an option that if Rama cannot catch the deer alive, then at least he brings her the deer’s body so that she may use it as a rag.

Rama becomes angry after Lakshman refuses to obey his orders when she sends him out to look for him. Her desire exposes her to Ravan’s desires which force him to kidnap her and carry her away with him to Lanka. This situation is in sharp contrast to that of Eve in the epic story ‘Paradise Lost’. In ‘The Ramayana’, Sita’s fall is her desire for a good that is illusory which separates her from Rama her protector and thus becomes vulnerable to capture, while to Eve, it makes her vulnerable to temptation by the serpent which later leads to her eating of the apple.

The two scenarios depict the same theme content, and that is a woman’s desire that leads to unfortunate endings. In the case of ‘Paradise Lost’, the eviction from the Garden of Eden, while in ‘The Ramayana’, a war ensued. The contrast in the way the two characters are shown in the two epic stories is also different. The author individualize Eve right from the start of the book however in the case of Sita, the author individualize her after the incidence where she became angry with Lakshman for not obeying her when she sends her to go fetch Rama. Of the two, Eve as portrayed in the book ‘Paradise Lost’ is in contrast with how she has always been portrayed by people generally and other poets too. She is shown as an object of desire, her work in the garden and her sexual relations with Adam.

She is thus the author’s portrait of an ideal woman with an exception being her desire for knowledge which indicates her as a cultural symbol. Sita on the other hand is more of an ideal character. The psychological reality that is shown by Sita’s story and her loss is evident too in other classical myths and is also present in the Biblical myths of the Garden of Eden. The nature of ‘The Ramayana’ epic story also helps in suppressing many other author’s ideals and aspirations as it is a collective work of individual elements. The analysis of the two characters gives the conclusion that a character’s thematic condition is reliant on the poet’s capacity of showcasing his own ideals. 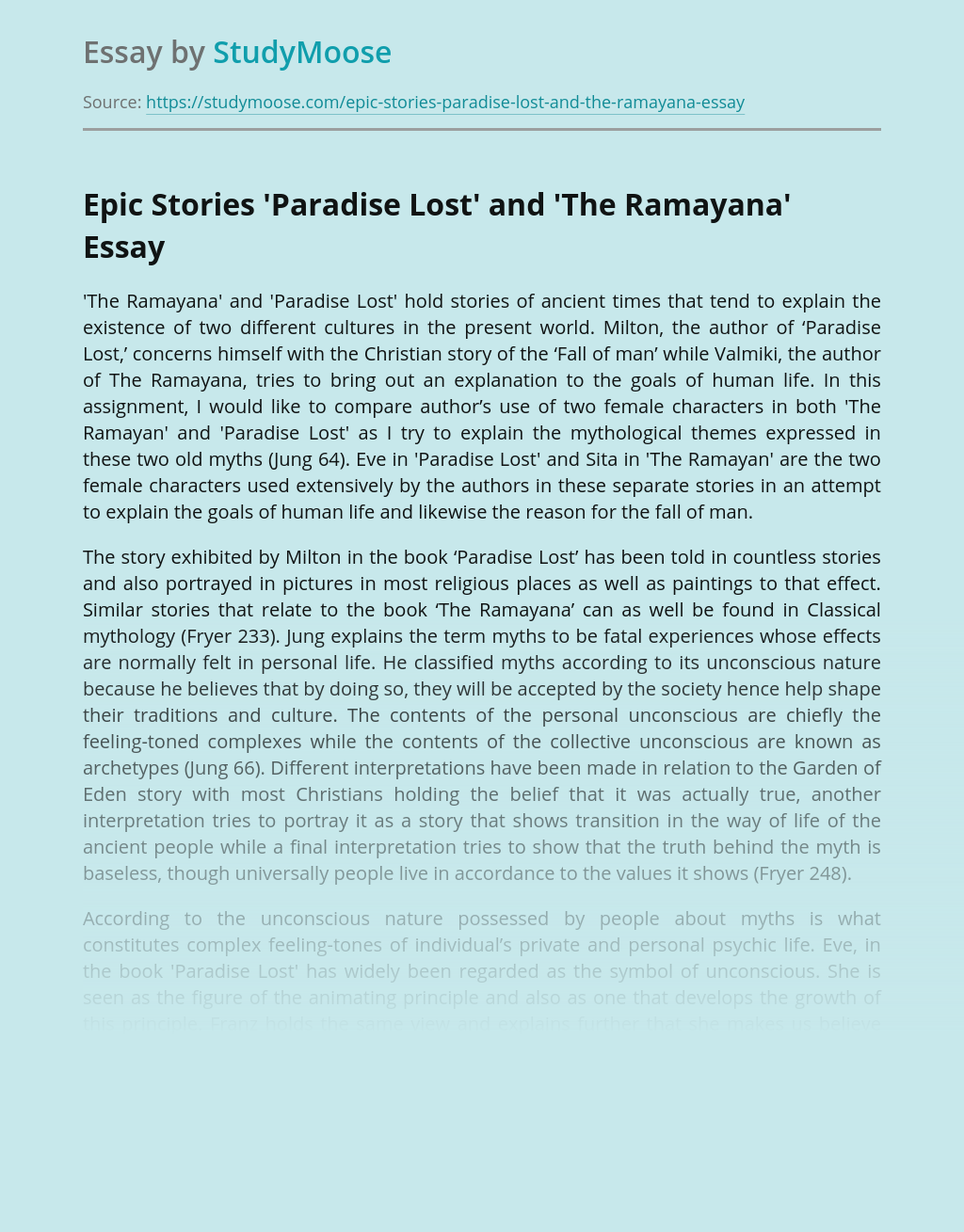 Turn in your highest-quality paper
Get a qualified writer to help you with
“ Epic Stories ‘Paradise Lost’ and ‘The Ramayana’ ”
Get high-quality paper
Helping students since 2015
Stay Safe, Stay Original