Milton read out aloud as he dictated a transcript of the epic. This was apposite as the good Greek epic was recited not read. How has the fact that this passage was recited had an impact on how language is used?

The language technique of repetition is used in this text selection. Examples of repetition in this piece includes the words ‘whom’ and ‘what’, which give the piece an emphasis thus creating a more powerful tone and in other words a voice (more of a passion).

Don't use plagiarized sources. Get your custom essay on
“ Language analysis for Paradise Lost ”
Get custom paper
NEW! smart matching with writer

These words help create life to the sentences eg. “But first whom shall we send” and “whom shall we find”. The use of ‘whom’, helps create a commanding tone especially when incorporated into these lines. The commanding tone created lets the audience know that someone with authority is speaking these words, and in this case it is Satan. Another example is “what strength, what art can then”, which produces the same effect as the word ‘whom’ as stated above.

So it is these repetitive and powerful words that help develop the characters and bring life to this extract. Without repetition, a sense of passion isn’t highlighted and thus no sense of voice is created to develop the characters. Reciting this extract with repetition produces a stronger voice because it seems as if a live person is speaking these words rather than an inanimate object.

Personal pronouns such as the word ‘we’ is a techniques used in this extract eg.

Visually powerful adjectives are used in this extract to help produce a powerful image for the audience to picture. An example of such includes ‘dark unbottom’d infinite’ in the line “The dark unbottom’d infinite Abyss”. A powerful image of a dark never-ending bottomless pit is portrayed by this line. This shows that adjectives are used affectively to achieve their purpose. Adjectives are meant to be used to create a visual image for the mind to picture of a scene, event or object. This can only be achieved by use of strong descriptive words otherwise the mind cannot picture what is described. Adjectives are used in this extract because the writer wants to involve the audience so that they feel as though they are part of the story. So adjectives contribute significantly to the compiling of this extract and without them, Milton cannot share his ideas with the responder.

This technique when incorporated produces a powerful way of communicating Milton’s ideas across to the audience when recited, because his words seem to come alive as images created seem so real due to the visually powerful adjectives used.

The above sentence doesn’t really sound like a statement coming from Satan because he seems to be the never giving-up type and one who would continue to keep trying at no matter what cost, meaning that there could be a hidden message to this statement. So Satan could possibly mean the opposite of what he is saying. “The weight of all our last hope relies.” also sounds a bit extreme especially when coming from Satan’s own mouth because it seems to be too big a risk for Satan putting all hope into just a small opportunity. Emotive language and hyperbole are used to gain the attention of the audience. So the purpose of these 2 techniques is enhanced when this extract is recited because these techniques appeal directly to the emotions of the audience. By doing so, the audience’s attention is gained.

Alliteration occurs when the first letter of a word appears a number of times in a sentence. An example of an alliteration is ‘strict Senteries and Stations’ in the line “Through the strict Senteries and Stations thick” and another example is ‘Here he had’ in “Here he had need”. The letter ‘s’ is repeatedly used to start words in the first example and the letter ‘h’ is done similarly in the other example. Alliteration is usually used to grab the attention of the audience. As this is the purpose of an alliteration, it is better to dictate such sentences rather than to read over them and miss the point of having them. Alliterations are meant to stick in one’s head rather than to be overlooked as if nothing at all, so alliterations are meant to stand out and the effect of standing out can only be achieved through a recital. That’s why the recital of this piece is more appropriate than reading it.

The use of an oxymoron is quite effective when trying to compare something to something quite opposite to itself eg. an oxymoron could be something as plain as ‘a cold fire’. From this example, it could mean something that seems welcoming but at the same time quite disturbing eg. the cry of a baby. However an oxymoron can be interpreted in many ways. In this extract, examples of an oxymoron are ‘palpable obscure’ and ‘vast abrupt’. There is a contrast of the words palpable and obscure in the first example.

One meaning could be that something is so obvious but yet outrageous to be true. An example is the quote ‘the most dangerous place is the most safest place’ (meaning the most obvious place is the most safest place because no one consider looking there believing that no one would think of such a place in the first place). In this case, this would be referring to Earth but perhaps implying that a venture into the unknown (Earth) would be unconsidered by God himself. There is also a contrast of the words vast and abrupt in the other example. This sentence can be interpreted as a task so small but yet so big meaning that the task is so small but so difficult to perform, that’s why it seems so big. The effects of an oxymoron are improved when spoken aloud rather than read because an emphasis is produced on these words when done so. 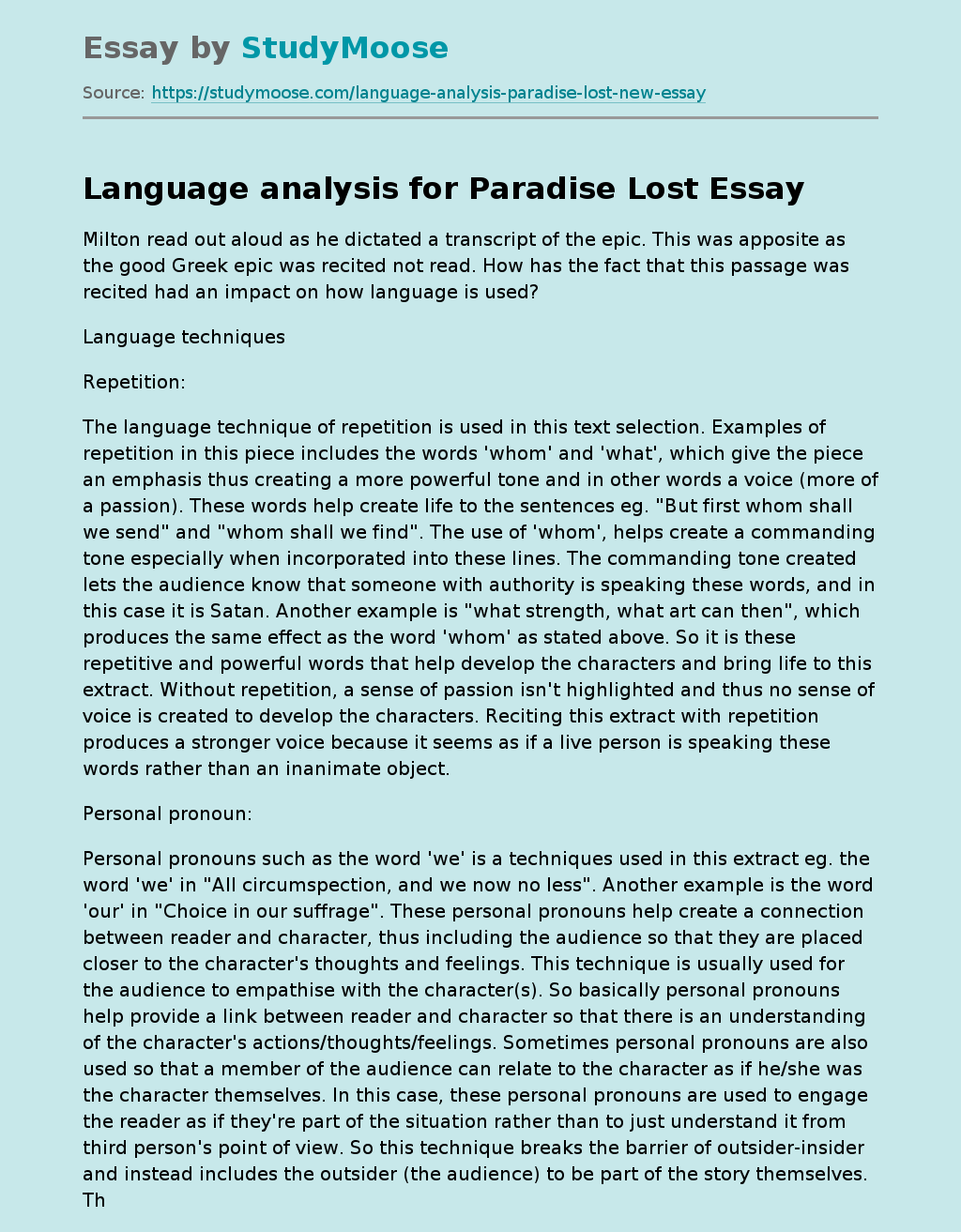